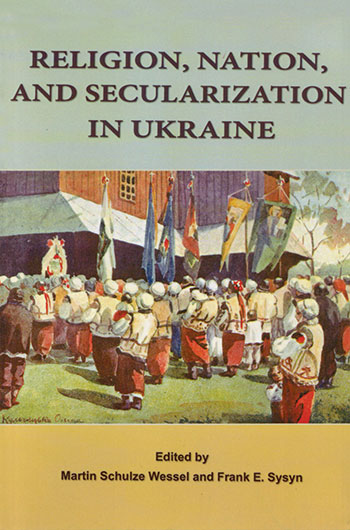 There is a great deal of scholarly literature on nation (and nationalism), as well as on religion in Ukraine. Comparatively little study has been devoted, however, to secularization and secularization theory. Yet religion, like nation, appears rather different when seen in the light of a theory that predicts its ultimate demise. Exploring the history of secularization helps us to test the validity of such a prediction. This collection of articles based on papers delivered at a conference held on June 25-26, 2010, in Munich, helps to fill this gap by viewing various episodes in the history of religion and nation in Ukraine in relation to secularization and modernization.

Four of the nine contributors, as well as co-editor Martin Schulze Wessel, are from Munich or Vienna. In recent decades, indeed, Ukrainian studies have flourished in Germany and Austria. Three of the authors, including co-editor Frank Sysyn, are well-known historians in the diaspora; two are from Ukraine.

In the opening article, Kerstin Jobst considers trans-national and trans-denominational aspects of the cult of St. Josaphat Kuntsevych. Once widely venerated by both Greek- and Roman Catholics, Poles and Belarusians, as well as Ukrainians, St. Josaphat has been somewhat neglected of late (how many Ukrainian Catholics name their sons Yosafat?). Prof. Jobst explores the reasons for this martyr’s uneven reputation.

Next, in a historiographical essay, Burkhard Wöller examines how Poles and Ukrainians in 19th and early 20th-century Austrian Galicia evaluated the 1596 Union of Brest. In doing so, the author traces major shifts in scholarly and public opinion during this time.

The linguistic jargon  and close textual analysis of Michael Moser’s “Clerics and Laymen in the History of the Modern Standard Ukrainian Language” should not dismay the non-specialist reader, for the author makes an important contribution by challenging the standard account of how modern Ukrainian developed. While that master narrative emphasizes the role of secular Ukrainian intellectuals in the Russian Empire, Prof. Moser points out the formative roles of some Orthodox clerics. Moreover, he argues, Greek-Catholic priests in Austrian-ruled Ukraine, like the under-appreciated Ivan Mohylnytsky and Iosafat Kobrynsky – and not just the famous “Ruthenian Triad” – contributed significantly to the creation of a modern vernacular-based Ukrainian language.

Turning to Ukraine’s Jewish community, Tobias Grill shows how 19th century rabbis acted as agents of modernization – and thus, ironically, secularization – not only in religion, but also in education, philanthropy, and politics. In doing so, he broadens our knowledge of Judaism in Ukraine – a knowledge typically limited to the Hasidic movement – to include the Haskalah or Jewish enlightenment.

As Dr. Sysyn shows in the following essay, Greek-Catholic priests like the Rev. Mykhailo Zubrytsky of Mshanets (now in the Staryi Sambir district of the Lviv region) similarly promoted modernization and, unwittingly, secularization. While the Rev. Zubrytsky’s goal was to promote “social and national justice, education and progressive politics” by reforming society and nation along with religion, his efforts sometimes had the unintended consequence of paving the way for anti-clericalism and Communism.

As Liliana Hentosh points out in her contribution, under the modernizing Pope Benedict XV (who reigned in 1914-1922), the Vatican became an active participant in international diplomacy and humanitarian war relief. But how should it regard nation-building efforts by the Ukrainians, a mostly Orthodox people whose Greek-Catholic minority found itself locked in combat with the overwhelmingly Catholic Poles? Citing documents from the Vatican archives, Dr. Hentosh traces the ins and outs of Vatican foreign policy in the tumultuous aftermath of World War I.

It would seem obvious that modernization should entail adopting an overdue calendar reform dating from 1582. But as Oleh Pavlyshyn demonstrates in his article, economic, political and nationality factors can complicate the issue in unexpected ways. Citing numerous little-known facts, he recounts the progress of the calendar question in the Ukrainian Greek-Catholic Church between 1900 and 1930 – in the diaspora as well as in the homeland. Paradoxically, it appears that in a modernizing Church, the laity can successfully resist modernizing reforms imposed from above.

The title of Martha Bohachevsky-Chomiak’s study on the Greek-Catholic hierarchs and the Ukrainian diaspora community between 1900 and 1930, “Shadow Boxing,” can be understood in more than one way. The reader may initially be confused by her analysis of Ukrainian conflicts in terms of Church and state, in the absence of both an independent state and an autonomous Church (p. 127). However, her treatment of clerical-lay conflicts as symbols or surrogates for Church-state clashes, which took on an air of unreality as the intelligentsia substituted petty controversies for the exercise of the real political power that they craved but lacked, reveals how apt a characterization “shadow boxing” is.

Dr. Bohachevsky’s account contains many acute observations and some implicit caveats. She points out, for example, that Greek-Catholic bishops Hryhorii Khomyshyn and Iosafat Kotsylovsky “wanted to create a Christian society centered in and on their Church, but they provided few details on how to build such a society” (p. 134). She shows how Bishop Constantine Bohachevsky’s tough, uncompromising stance in his bitter war with the émigré intelligentsia and a part of the clergy – he did not shrink from excommunicating his enemies – won him a Pyrrhic victory. A quarter of Ukrainian Catholics left the Church – but nearly all the dissident priests returned to the fold, and he was able to complete his program of strengthening the Ukrainian American community through education. The reader is left eager to learn more about the next catastrophic “storm” in the Ukrainian Catholic Church, which occurred under Metropolitan Ambrose Senyshyn in the early 1970s (p. 148).

In the final article of this collection, Leonid Heretz, who together with Dr. Sysyn has been conducting a micro-historical study of Mshanets and the surrounding Boiko area since 1986, resumes the theme of clerical secularizers. Drawing on evidence from oral history interviews, he explores the intriguing connections among religion, superstition, national identity, modernization and secularization. In doing so he describes some bizarre folk practices that managed to co-exist with conventional religion.

Readers will find much to ponder in the varying responses to the challenges of modernization and secularization depicted here. If Bishop Bohachevsky’s reply to diaspora secular opposition was uncompromising resistance, the secularizing Galician pastor of Mshanets’ helped to create a “new modern(izing) form of religiosity” that was “compatible with modern notions of reason, progress, human agency and equality,” as well as with a modern national identity (p. 156). Today, as Ukraine’s intelligentsia flocks to a flimsy secular liberalism that has lost its Christian foundation, which strategy will its religious leaders pursue – principled resistance, or adoption and adaptation? Neither seems adequate.

For those curious about the fate of religion in Ukraine and the diaspora in our secular age, this collection offers new thinking on the essential historical background. It is available as an attractively designed paperback with Olena Kulchytska’s “Christ is Risen” reproduced on the cover.