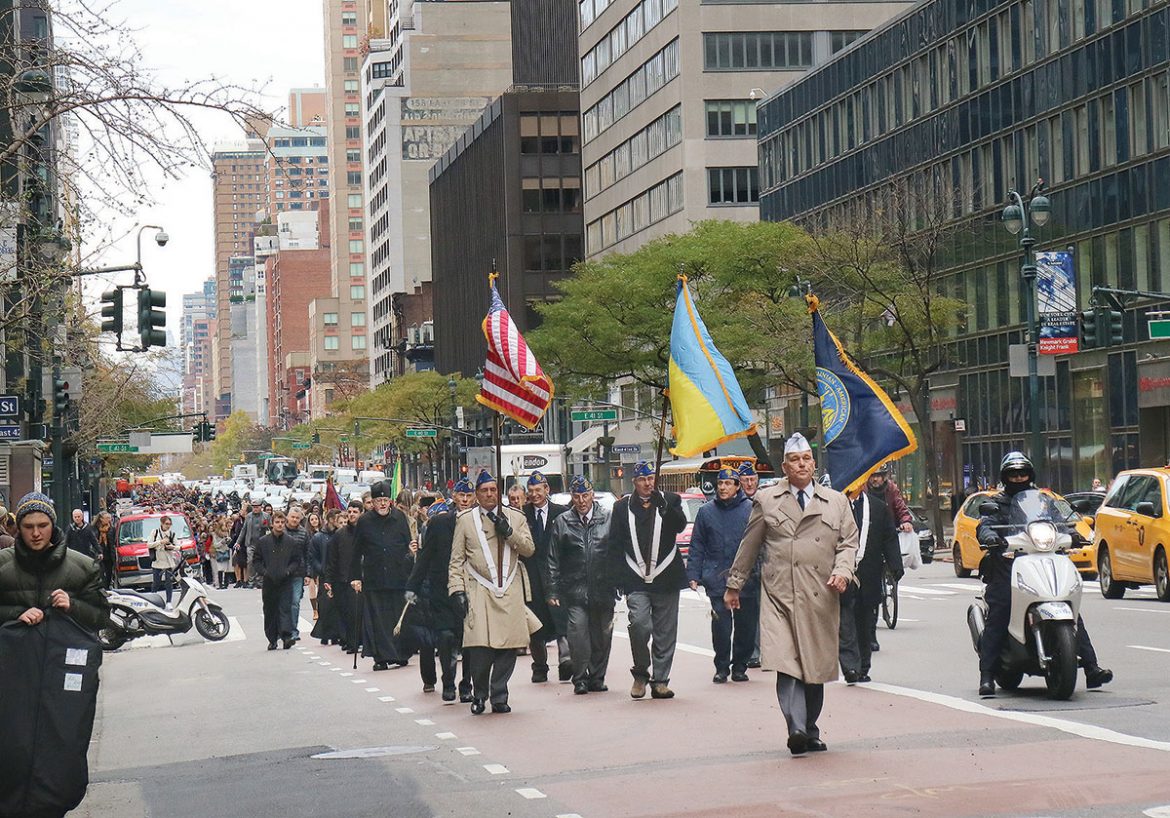 NEW YORK – Over 1,000 Ukrainian Americans and supporters gathered in New York City on Saturday, November 18, to remember the victims of Stalin’s Famine Genocide – the Holodomor of 1932-1933. The day’s events began with a solemn procession from St. George Ukrainian Catholic Church in the East Village, and then up Third Avenue for two miles before arriving at the landmark St. Patrick’s Cathedral in the heart of Manhattan.

With the assistance and escort of the New York Police Department’s 9th Precinct, marchers lined up behind a pick-up truck carrying a church bell from St. Basil’s Seminary in Stamford, Conn. A color guard of Ukrainian American Veterans from the tri-state area was led by New Jersey State Commander Michael Hrycak and Connecticut State Commander Ihor Rudko, as well as Yonkers, N.Y., Post 301 Commander Nicholas Skirka. Veterans from Posts 14, 15, 17 and 30 participated in the march.

An assembly of Ukrainian Catholic and Ukrainian Orthodox clergy and seminarians assembled into rows behind the tolling bell and unfurled national flags. They were led by Metropolitan Antony of the Ukrainian Orthodox Church of the U.S.A. and Bishop Paul Chomnycky, OSBM, of the Ukrainian Catholic Eparchy of Stamford. Other groups identified themselves with banners held throughout the procession, including St. George Academy students and staff, the Self-Reliance School of Ukrainian Studies of New York, the New Ukrainian Wave Saturday School in Brooklyn, Plast Ukrainian Scouting Organization, the Ukrainian American Youth Association, the Ukrainian National Women’s League of America, the Organization for Defense of Four Freedoms for Ukraine and others. Buses arrived from Albany and Kerhonkson, N.Y., Hartford, Conn., Philadelphia and cities in New Jersey.

At St. Patrick’s Cathedral, a solemn procession of schoolchildren was joined by the Ukrainian American Veterans and Holodomor survivors Oleksandr and Nadia Severyn. Also processing were three wounded veterans of Ukraine’s anti-terrorist operation in the Donbas: Yevhen Redka, Serhiy Bulan and Dmitriy Kotov.

Metropolitan Antony greeted the assembly with a reminder that “Ukraine is enduring perhaps its greatest trials since achieving independence,” adding a prayer beseeching the Almighty to “give us His blessing to preserve and support our independent Ukraine, which the God-loving Ukrainian people currently are defending and protecting at great cost.”

As it has for nearly two decades, the Ukrainian Chorus Dumka sang the entrance processional, all the requiem responses, as well as a recessional prayer, all under the direction of Vasyl Hrechynsky.

Following the requiem service, attendees were addressed by Tamara Olexy, national office director of the Ukrainian Congress Committee of America (UCCA), who served as the program’s master of ceremonies. In her opening statement, she said “the Holodomor is but one example of Russia’s unending campaign to enslave Ukraine” and noted that, when we commemorate “Ukraine’s Genocide of 1932-1933, we must also be cognizant that Russian aggression against Ukraine continues to this day.”

Speaking next, the ambassador of Ukraine to the United States, Valery Chaly, expressed the hope of Ukrainian President Petro Poroshenko that one day Congress “will recognize the Holodomor as the genocide of the Ukrainian people.” Ambassador Chaly also thanked the legislatures of states such as Washington, Oregon and California for having brought up official recognition of the Holodomor over the course of the last year.

U.S. Senate Minority Leader Charles Schumer (D-NY), currently the country’s top-ranking elected official from the Democratic Party, expressed his “honor and privilege to be here” as he has attended nearly all 19 annual commemorations of the Holodomor at St. Patrick’s. In an address punctuated by instances of thundering applause, the senator stated that it is “our sacred duty to honor the victims of the Ukraine Genocide,” that “now, more than ever, it is essential that the United States and Ukraine stand together, shoulder to shoulder, in the face of Putin’s reckless foreign interventions.” (For the text of Sen. Schumer’s remarks, see page 3.)

Attending on behalf of Gov. Andrew Cuomo, Jenifer Rajkumar from the New York State Executive Chamber first presented a formal letter from the governor joining the “Empire State’s… large community of Ukrainian Americans” in honoring the victims of the Holodomor and then deviated from the governor’s letter to speak predominantly about state governmental affairs.

New York City Councilwoman-elect Carlina Rivera expressed her honor at joining her constituents from New York City’s East Village and noted how moving the requiem service had been. She then read a prepared statement by Congresswoman Carolyn Maloney (D-N.Y.), which was punctuated with the declaration that “the Holodomor was genocide.”

Steven Kashkett from the U.S. Department of State attended for the first time this year and delivered the official U.S. statement commemorating the Holodomor. “The United States stands with the people of Ukraine as we commemorate this Soviet-manufactured tragedy and condemn efforts to deny it as a historical fact. We also reaffirm our commitment to a secure and prosperous Ukraine, free from external aggression and occupation, and able to choose its own future,” it read in part. (The full text of the statement appears on page 3.)

Ambassador Volodymyr Yelchenko, permanent representative of Ukraine to the United Nations, noted the Ukrainian government’s ongoing call for worldwide recognition of the Holodomor as genocide by governments around the world.

Completing the day’s program, Michael Sawkiw, chairman of the U.S. Committee for Ukrainian Holodomor-Genocide Awareness 1932-1933, brought together all of the points touched upon that afternoon, and included the historical numbers of losses and the contemporary accounts that underscore the need for more awareness of the genocidal Holodomor both in the United States and around the globe.

Prior to the recessional, Metropolitan-Archbishop Stefan thanked all who participated in the day’s events, including the U.S. Holodomor Committee and its local representative Ivanka Zajac, who as president of the United Ukrainian American Organizations of New York managed most of the details of the outdoor march and indoor processions. The metropolitan thanked the assembled speakers, as well as the staff at the cathedral and Cardinal Timothy Dolan, archbishop of New York, for hosting the memorial service.