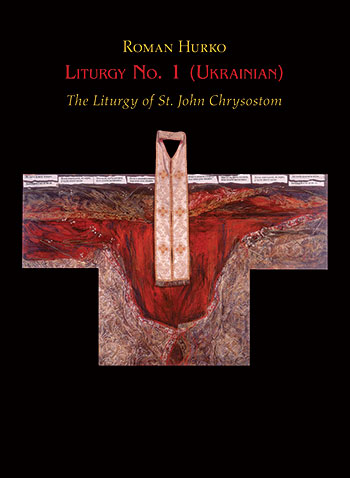 However, these two settings of the “Liturgy of St. John Chrysostom” have not been heretofore published in print, which has hampered his creativity from being presented to the wider choral public.

“Liturgy No. 1” (2000) by Mr. Hurko generates the impression of a coherent holism, as if it were written in one breath. Its elements are strictly subordinated to the logic of developing the ritual of the liturgy. A natural, unstrained current of music progresses toward the culmination of the church service. Great musical “breaths” build dominating peaks that rest on the principal liturgical events: “Only Begotten Son,” “Cherubic Hymn,” texts of the Anaphora, “Credo,” “The Lord’s Prayer-Our Father,” “It is Truly Meet.” The music pours forth calmly, evenly, generating the impression of a continuous musical stream. Simultaneously, it is subject to an internal rhythm that creates soft melodic lifts and falls, wide rhythmic pulsations that immerse the listener into an enchanting musical environment, similar to Ukrainian rivers with their broad relaxed flows. 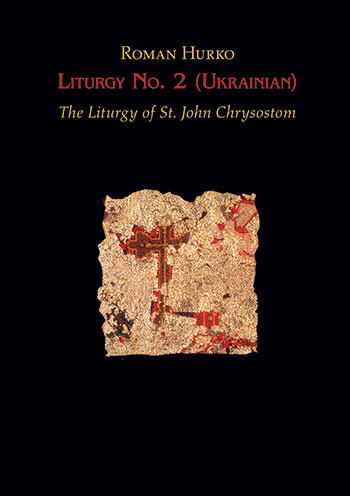 The composer uses only traditional means of musical expression. A four-voiced, mixed choir sings mostly in harmonious texture, changing to polyphony only to emphasize particularly significant moments of worship. The music is built on familiar melodious, soft, gentle intonations that seem to come from the music world of Mykola Leontovych and Kyrylo Stetsenko (“Holy God”). The simplicity of the melodic lines evokes the warm light of a Ukrainian village church with its peace and tranquillity, its sense of space, family, the familiar and loved. The choir does not shout, does not inordinately strain itself. It does not reach for tessituras that are too high or too low. All music resources are aimed at rendering the cantabile that is immanent in Ukrainian singing culture.

However, the music of Mr. Hurko is not simple. On the contrary, it is alive, active. One continually feels changes, arousal and unexpected turns in development in the direction of movement. Choral interchanges between groups of singers seem to juxtapose the heavenly and the earthly (“Only Begotten Son”). Many interesting harmonic effects, especially modal, like juxtaposing unrelated harmonic functions (“Cherubic Hymn,” “It is Truly Meet”), and resolving cadences to unexpected tonics, continually change the harmonic light, once suddenly illuminating certain important words or whole parts of the form, or completely darkening the texture, thereby achieving a sense of mystery, even daze. In chants towards the end of the liturgy, the music in the sacramental “Praise the Lord from the Heavens Above” takes on dramatic features. Texture flowers into dazzling dissonant harmonies of sound clusters whose bright flashes illuminate an unexpected new quality of the sacred word. And in the final, “Blessed be the Name of the Lord” the dramatization is enhanced by the overlay dissonant voices on a sustained pedal point.

Throughout the liturgy the composer’s fascination is evident with the music of his predecessors Stetsenko and Leontovych, with their gentle tonal coloring of Ukrainian national music. Mr. Hurko uses no showy effects, although he convincingly demonstrates fluency with the musical idiom of contemporary composers. His goal is to create a musical interpretation of the liturgical ritual. And he does so with very simple means appropriate to the church. Thus, despite the complexity of some of his music, his liturgy can readily be sung by any church choir. Thanks to his reliance on melodiousness and use of simple as well as untraditional compositional means, the music of his “Liturgy No. 1” becomes both a traditional composed Ukrainian liturgy, and a thoroughly contemporary piece of sacred music, worthily presenting Ukrainian choral art.

“Liturgy No. 2” (2003) by Mr. Hurko gives the same impression of holistic structure as the first liturgy. It is equally melodious, quite simply written – hence easy to perform, and is focused on Ukrainian tonality. However, the second liturgy significantly deepens imagery. Its range extends from immersion into the atmosphere of simplicity of monodic singing (canonical single voice line sung in unison as in “It is Truly Meet” – an allusion to “Holy God” by Yakiv Yatsynevych), to a powerful flash of emotion in the complex, dramatically saturated “Credo – I Believe in God,” ​ choral concerto-like with brilliant music, dramatic effects, fine textured work and timbre contrasts. This chant is the emotional center of the whole liturgical cycle, to which all previous chants converge, and from which all following diverge.

The second liturgy is more diverse in its stylistic sources. There is much here from Ukrainian music of the baroque era, particularly from polychoral concertos (featuring choral exchanges between groups of singers with their timbre contrasts, as in “Only Begotten Son,” “Our Father – The Lord’s Prayer”); from Maksym Berezovsky (the Eucharistic “Praise the Lord from Heavens” is structurally similar to the same sacramental hymn by this great Ukrainian composer); and from Ukrainian classics Stetsenko (the beautiful “Holy God”), Leontovych (“In Thy Kingdom”, “Mercy of Peace”). If the emotional development in the first liturgy is due to modal and harmonic juxtapositions and contrasts, in the second liturgy the driver of development is textural conversion – unison, choral dialogue between groups of singers, solos, mainly mixed textures, pedal points and so on. The structurally complex “Credo-I Believe,” which is based on pedal points, is the most interesting of the constructions. These pedal points permeate the entire composition, and create a frame on which new episodes are constructed. They mould the form and become a powerful source of dramatic imagery.

The publication of scores and recordings of the two liturgies by Mr. Hurko is a major cultural event in Ukraine, as well as the diaspora. These sacred compositions that appeared at the beginning of the 21st century, unfortunately, are not known well enough. The value of these works of this Ukrainian composer – Ukrainian, despite the fact that he was born outside Ukraine, educated and productively works in the wider world, is that his music conveys the spiritual qualities that are unique to Ukrainian musical culture. This is a deeply national music, which grew out of Ukrainian intonation and which conveys the gentle, benevolent mentality and spirituality of Ukrainian people. It carries tradition – so important in a time of uncertainty of world outlook that we happen to live in.

On the other hand, this work is an example of superb compositional professionalism. The skill of Mr. Hurko shows from the first bars of the “Great Litany” and is unobtrusively demonstrated throughout his gifted compositions. The composer’s ability, using only the frugal means of a four-voice mixed choir to convey the full range of diverse feelings, moods, desires; his skill in handling both simple and complex choral forms, allow him to create compositions that convey both the softness of antiquity and the bite of modernity. As a result, his choral works do not generate unnatural technical difficulties but rather can be sung easily, naturally, by any church choir. This is how the Ukrainian classic Dmytro Bortniansky wrote, whose works to this day remain in the repertoire of all church choirs in contemporary Ukraine.

We wish the same good journey for the sacred works of Roman Hurko.

For information on how obtain these scores, readers may write to: CARO Productions, Ansonia Station, P.O. Box 230152, New York, NY 10023 or e-mail carocpw@gmail.com. Information is also available at www.romanhurko.com.