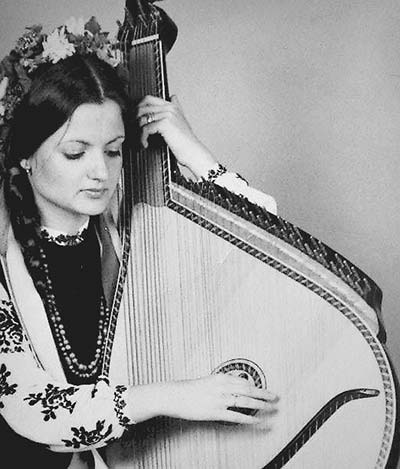 BRIGHTON, Mich. – Lydia (Lida) Czorny Matiaszek, a Ukrainian cultural and community activist both in the United States and Ukraine, died on September 17 at the age of 58.

Funeral services were held in Kyiv at the Ukrainian Catholic Patriarchal Cathedral of the Resurrection on September 22. Burial was held later at the Baikiv Cemetery in Ukraine’s capital.

Ms. Czorny Matiaszek was born April 11, 1962, in Jamaica, N.Y. She grew up in a home with a very strong Ukrainian identity. Her father, Mykola Dosinchuk-Czorny, was a tireless promoter of the bandura, initiator of the New York School of Bandura and editor of Bandura magazine. Her mother, Stefania, was active in New York City’s Ukrainian American community, not only supporting her husband’s work and raising their family, but also deeply engaged in Hutsul cultural projects.

Having attended kindergarten at St. George Ukrainian School in Manhattan, Ms. Czorny graduated from Presentation of the Blessed Virgin Mary Elementary School, and then high school at The Mary Louis Academy, where she played the harp in the school orchestra. From 1968-1989, she spent a considerable amount of time participating in all things Ukrainian on New York’s Lower East Side – Saturday Ukrainian school, Plast Ukrainian Scouting Organization, Moloda Dumka choir, St. George Ukrainian Catholic Church and the New York School of Bandura.

Following in the footsteps of her older sister, Irene, Ms. Czorny began playing bandura when she was 7, taking lessons from the Rt. Rev. Serhij Kindzeriavyj-Pastukhiv, musical director of the New York School of Bandura. By 1980, she had participated in over 100 school performances at countless Ukrainian community events including the annual St. George Ukrainian Festival on Seventh Street. Performances at non-Ukrainian events included the Rockefeller Center Christmas Tree-Lighting Ceremony (televised on NBC, CBS and ABC in 1974); numerous performances at New York City’s Bicentennial celebration, including a bandura float in the parade (1976); Lincoln Center Hall of Science (1978). The group was also selected to play for Pope John Paul II at St. Patrick’s Cathedral (1979) and to greet Ronald Reagan (1980).

Expanding her lifelong commitment to bandura beyond the Big Apple, in 1979, Ms. Czorny attended her first summer bandura camp at Kobzarska Sich in Emlenton, Pa., directed by the renowned Hryhory Kytasty. As was the case with so many young bandurists, she developed a strong rapport with the composer, teacher and conductor of the Ukrainian Bandurist Chorus. At this and subsequent bandura camps, she befriended a multitude of other young bandurists – not in the least due to her radiant warmth as a person, her compassion for others, her keen sense of humor, and her love of the bandura and Ukrainian music. Ms. Czorny served as an instructor with the New York School of Bandura in the mid to late ’70s, and was then recruited to be an instructor at many bandura camps and workshops throughout the 1980s in Pennsylvania, Ohio and Michigan.

She was one of the founding board members of the Society of Ukrainian Bandurists (SUB), established in 1982. Much that was accomplished by the society was thanks to her invaluable communication and coordination skills, and behind-the-scenes work, e.g., event preparation, newsletter preparation. Ms. Czorny participated as an organizer and a performer in SUB events, including the recording of the “Lita Molodii” album (1982) with Maestro Kytasty in Detroit; the performance of 150 bandurists at the World Congress of Free Ukrainians convention in Toronto (1983); SUB concerts with 100-plus bandurists from across North America in New York (Town Hall) and Philadelphia (1984); and a concert at Hunter College in New York (1989) commemorating the fifth anniversary of the passing of Maestro Kytasty.

In 1982, Ms. Czorny together with then New York School of Bandura Director Julian Kytasty established the youth ensemble Homin Stepiv, a premier performing ensemble of 15 of the best bandura players in the New York vicinity. This was one of the most exciting bandura ensembles at the time; Ms. Czorny and her close friend Lilia Opanaschuk were the group’s managers. Besides her wonderful musical contributions and organizational skills, Ms. Czorny offered the group her steady hand and keen ability to smooth over difficulties, leading the ensemble to stellar accomplishments. One was the recording of the album titled “Homin Stepiv” in Montreal in 1984 – still one of the finest examples of bandura ensemble music in existence. Another was a two-week concert tour to Argentina and Brazil in 1987 (by this time also taking on some bandura “ringers” from outside of New York), organized by her father but with significant help from Ms. Czorny and another performer, Darka Leshchuk Pencak. 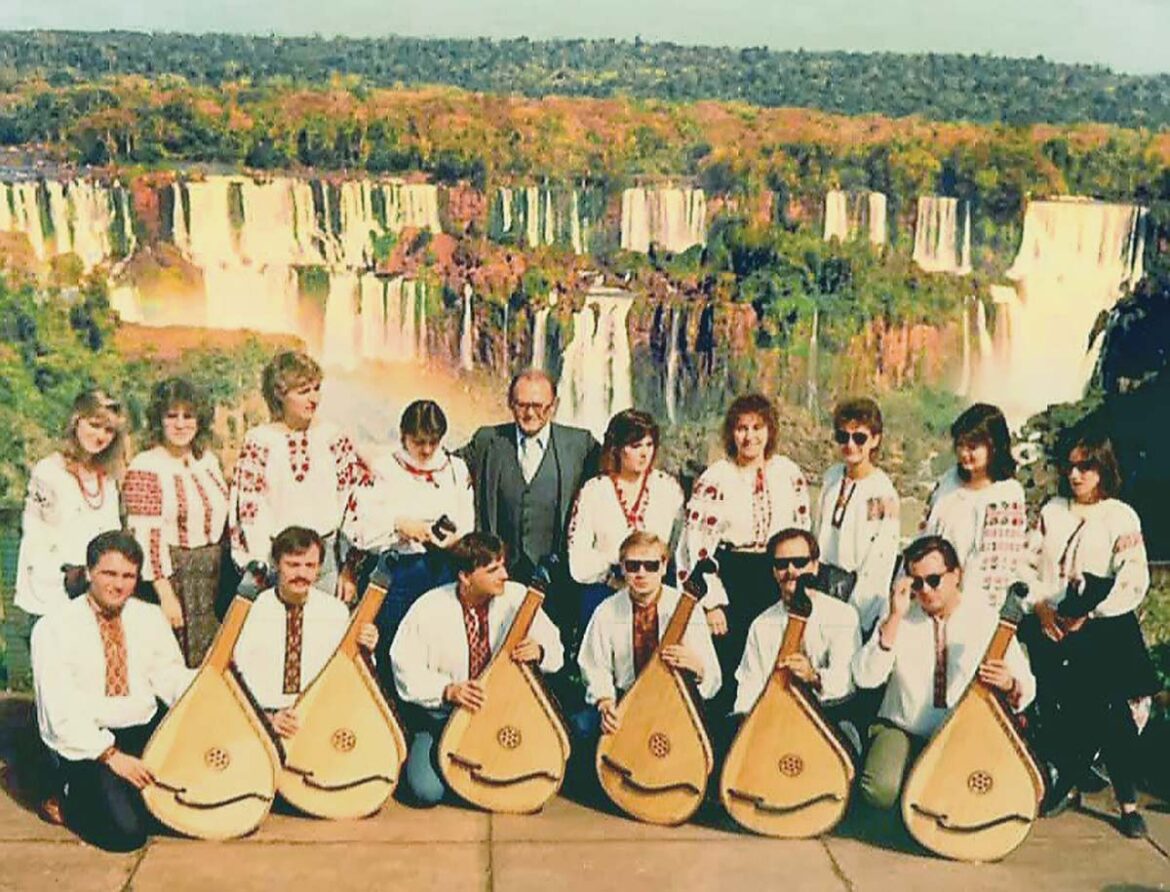 During the Homin Stepiv South American tour in 1987, Lydia Czorny is seen in the second row, second from right.

All this time, Ms. Czorny’s father (“Pan Czorny” as he was known in the bandura world) continued his resolute efforts to promote the bandura. One of his most important contributions was to launch Bandura Magazine, which was published between 1981 and 1997. It included a range of materials and information valuable to the bandura-playing world and beyond: research on bandurists; articles about ensembles throughout the world; reports about important performances; testimonials about bandurists and their legacy. These publications remain a treasure trove for Ukrainian music researchers. While Pan Czorny took on the herculean task as editor, the journals would not have been possible were it not for the inordinate behind-the-scenes work done by his younger daughter. Published in Ukrainian and English, it required extensive translations, editing, proofing and distribution. Ms. Czorny worked tirelessly with her father to make it a reality.

But there was much more to Ms. Czorny’s life than bandura. In 1985 she earned a bachelor’s degree in international relations at New York University, soon followed by a master’s in public administration. As a college student, she was an active member of the Mykola Mikhnovsky Ukrainian Student Association (known by the Ukrainian acronym TUSM), participating in many protest actions against the abuse of human and national rights by the Soviet regime. In 1991-1994 she was the director of the National Bureau of the Ukrainian Congress Committee of America.

Throughout the 1980s, she also worked with Prof. Petro Goy of the Ukrainian Free University to organize summer trips of Ukrainian youth to Europe (“Stezhkamy Batkiv po Evropi” – “In the Footsteps of our Parents through Europe”). Here as well, she found a way to integrate her love of bandura, initiating the launch of a week-long bandura course at the Ukrainian Free University in Munich in the 1980s and early 1990s. This gave impetus for bandurists from the U.S., who traveled with the “Stezhky” group, to meet with those from various countries in Europe, i.e., Germany, France, England, Poland and Yugoslavia. These courses also gave rise (with Ms. Czorny’s quiet help, of course) to the Society of Ukrainian Bandurists of Europe.

It was during a “Stezhky” trip in 1984 that Ms. Czorny met the man who later became her husband, Petro Matiaszek from New Jersey. They were the first Ukrainian diaspora couple to come to a restive (though still Soviet) Ukraine in 1990 to be wed at the Ukrainian Catholic Church of the Transfiguration in Lviv. In 1994, the Matiaszeks relocated to Ukraine. Professionally, Ms. Matiaszek was involved in many activities, including her work as the bureau director of IREX (where she launched the USAID Community Connections program), an active member of the International Women’s Club, providing meals and support for pensioners, and a board member of Caritas Ukraine. She also worked for a number of years at USAID in Kyiv. Rather than take credit for her extensive work and support of needy causes, she was heard to say it was her profound privilege to help these individuals, who displayed such incredible fortitude and grace, given their extraordinarily difficult circumstances. Ms. Matiaszek was also deeply involved in fund-raising efforts for the Ukrainian Catholic University (donations in her memory are requested to support UCU Scholarship Programs).

Amidst all this, in 2005 the Matiaszeks were blessed with the addition to their family of their beloved daughter Ksenia, to whom Ms. Matiaszek devoted the lion’s share of her boundless love and energy.

Nonetheless, Ms. Matiaszek remained an active supporter of bandura and bandurists in Ukraine while living in Ukraine. She brokered the connection between bandurist virtuoso Roman Hrynkiv and world-renowned jazz guitarist Al DiMeola for their production of a joint recording. In 1997, she helped organize a concert in Kyiv commemorating the 100th anniversary of the birth of Hryhory Kytasty.

While living in Kyiv, Ms. Matiaszek would return to the U.S. annually, mainly to visit her family. In 2012, she once again became an active mainstay of the North American bandura scene. From 2012 through 2019, during the last week of June, Ms. Matiaszek and her daughter were a regular, welcome presence at the beloved Bandura at Bobriwka annual workshops in Connecticut. Ms. Matiaszek did it all – teach, play, sing, as well as work in the kitchen. Her kindness and mirth contributed much to the magical atmosphere of this yearly happening. She will be certainly be missed at the next session.

With Ms. Matiaszek’s departure, the world has lost a kind and loving spirit. Ukraine has lost a resolute patriot. Petro and Ksenia Matiaszek have lost a beloved wife and mother, and so many people have lost a truly wonderful friend. The bandura community has lost a talented musician and supporter.

Lydia Czorny Matiaszek will not be forgotten, and bandurists and bandura supporters around the world honor her memory and will carry on her legacy.