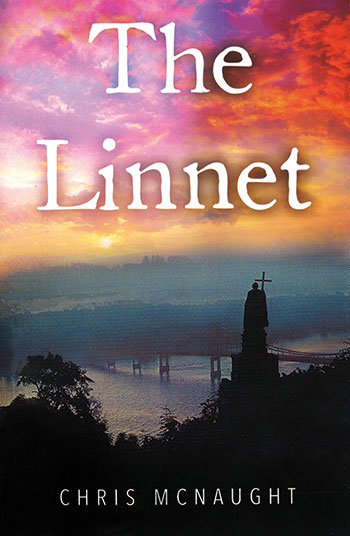 Visitors to author Chris McNaught’s website are greeted with the following quote by Gunter Grass: “People need books with an epic background. They are bored with books that tell only one story on one level. They need something fantastic, something that gives them a sense of living in history.”  Very clearly, it’s advice that Mr. McNaught followed in his newest novel, “The Linnet.”

“The Linnet” tells the story of a young Ukrainian patriot, Nina Vassilieva,  who is kidnapped into sex slavery in Birmingham, England.  Managing to escape, she by chance finds sanctuary with MI6 and embarks on a new career as an “asset.” Ostensibly a special cultural liaison and resident interpreter at the Canadian Embassy in Kyiv, Nina dedicates herself to  “uncaging the better angels of the republic.”   A Canadian lawyer of Ukrainian descent falls for her, and together they fight the “endless aftershocks of Holodomor, the Gulag, and those parasites scurrying to profit from the fresh crosswinds over the Steppes.”

A customer review on Amazon.com says, “It is a tour de force on two levels, Chris McNaught’s superb writing skills transport the reader through history in a succinct and moving way… While the story is technically fictitious, it is based on the reality that many people are having to deal with today and not only in Ukraine. This book is not to be missed.”

Mr. McNaught is a Canadian author, former criminal barrister, university lecturer, freelance journalist and artist with an ingrained love of storytelling, thanks to an anglophile mother. He was educated at Jarvis Collegiate (Toronto), Neuchâtel Junior College (Switzerland), Trinity College (University of Toronto), and the Faculty of Law (University of Toronto).

“The Linnet” is his third novel, once again sparked by personal experience. Mr. McNaught’s earlier books are “The Ambulance Driver” and “The Keli Dowry.” The latter is based on his time as a diver on an American dig in Greece during the late 1960s and early 1970s. His next will be a mystery, “Dùn Phrìs,” set on Scotland’s southwest coast.

“The Linnet” is available at online retailers such as Barnes & Noble and Amazon. For more information readers may visit  www.chrismcnaught.com.