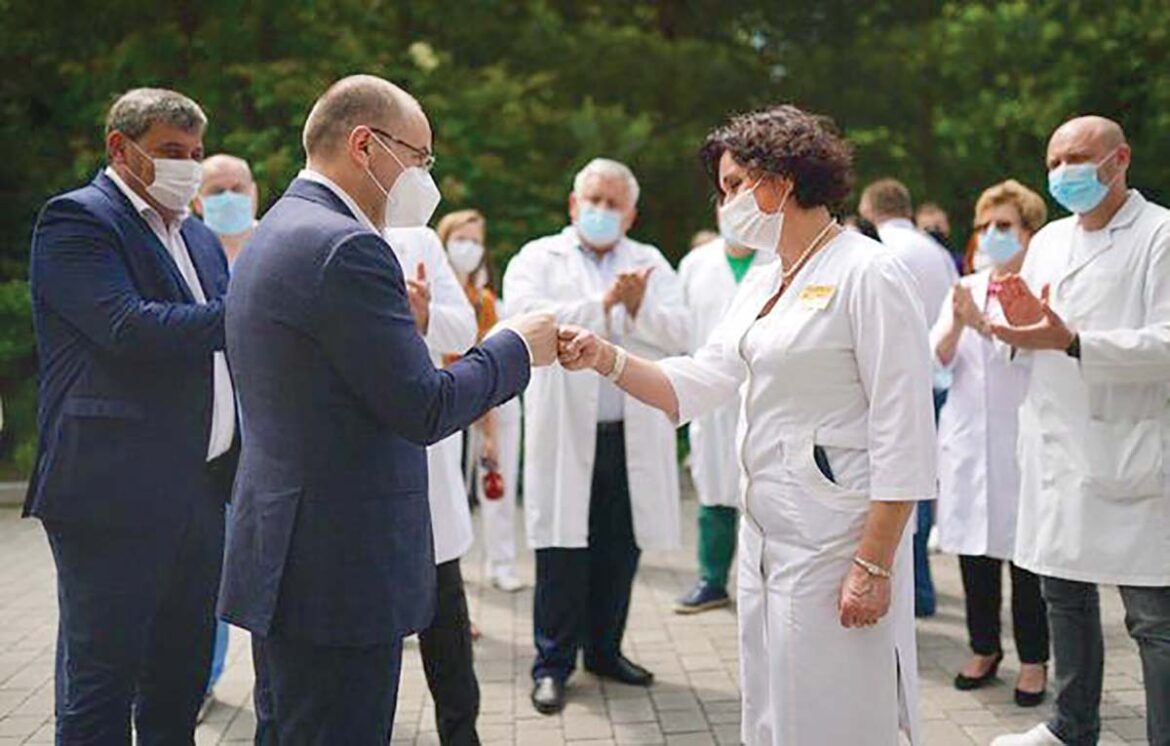 Ukraine’s Minister of Health Maksym Stepanov meets with doctors in Lviv during his working visit to the Lviv region on June 22.

Furthermore, Lviv Oblast now has the highest rate of increase in infections with the novel coronavirus.

As a result, Lviv is among those regions of Ukraine where quarantine restrictions have not been lifted to the next level. The daily disinfection of entrances and public transport, and the washing of roads and sidewalks, as well as playgrounds, continue in Lviv.

“Monitoring groups work in the trams and trolleybuses, and they check whether passengers enter public transportation in masks. They also check that there are no standing passengers, only sitting,” said Lviv Deputy Mayor Iryna Marunyak. “We plan to organize such groups on buses. Thanks to the work of monitoring groups, we will have information on transport, trade establishments, etc. This information is then sent to the crisis headquarters and analyzed, and appropriate administrative decisions will be made,” she explained.

One of the possible reasons that Lviv has registered such a high rate of infection is the number of cafés and restaurants in the city. It was easy to observe how people filled the center of this tourism capital once service was allowed at outdoor terraces. And quarantine fatigue brought people out into the streets with the arrival of warm weather.

Another reason for the high number of coronavirus cases may be that Lviv Oblast is among the regions conducting the most COVID-19 tests. On June 23, for example, the laboratory center processed 861 samples, of which 203 were positive – meaning that 24 percent of those tested had COVID-19.

Lviv Deputy Mayor Marunyak reported: “Monitoring groups go around and check on all facilities’ compliance with quarantine conditions. First of all, they check that visitors are in masks, that social distance is maintained. Also, that the sellers and employees of an institution follow the rules and that the institution has disinfectants,” said Ms. Marunyak. She noted that if an institution does not comply with the requirements, it is issued a warning. However, if the violation is significant and poses a danger to visitors, then a report is drawn up, or the institution could be closed by the police. Since the beginning of the quarantine, eight facilities in the city have been closed due to various violations. “Once all the faults are eliminated, a facility can resume operation. However, its work continues to be closely monitored,“ the deputy mayor explained.

A visit from the Health Ministry

Officials of Ukraine’s Ministry of Health arrived on an urgent visit to the Lviv Region because of the sharp increase in the number of coronavirus cases and the number of hospitalized people.

“Today I am with the leading doctors of Ukraine in Lviv to understand the situation, to help both in the epidemiological situation and in the medical field in general,” Minister of Health Maksym Stepanov said on June 22.

Mr. Stepanov said he thinks the outbreak of COVID-19 in Lviv Oblast is connected, among other things, to incompetent decisions made by some regional heads of the health-care system, and he promised that appropriate personnel decisions will be made. “I see an issue of management, and I see an issue with control of medicines. If there are no real changes this week, I will raise the issue of changing the leadership of the Department of Health of the Lviv Regional Administration,” the minister noted.

Travel to and from Lviv

Ukrainian Railways reopened its first routes on June 1, but Lviv was not among the available destinations. For three months, this popular tourism center was reachable only by car and, later, by bus. Due to the coronavirus situation in the Lviv region, the dates for resumption of train and airline travel were postponed several times. The director of Lviv airport said its losses are around 20 million hrv each month.

This writer booked one of the first scheduled flights to Lviv from Kyiv, but two days before the scheduled departure, the Lviv airport’s closure was extended for another three days. Thus, air travel from Ukraine’s capital operated to Ivano-Frankivsk, and airlines proposed using a bus transfer to Lviv.

Finally, on June 19, Lviv airport reopened. The first flights arrived from Germany and Hungary. However, due to European Union restrictions, Ukrainians cannot visit EU countries without working visas or diplomatic passports. The borders of most countries are still closed to tourism for Ukrainians, and the approximate dates for reopening are shifting due to the rise in the number of infections.

Ukrainian airlines have an opportunity to boost internal air travel in the country. With their low-cost approach, airlines compete with railways in terms of price, travel time and safety. This writer chose to return to Kyiv on a plane after the Lviv airport reopened.

The new age of air travel involves serious quarantine measures: temperature checks at the airport entrance, a mask regime throughout the airport and inside the planes, and social distancing at each point of pre-flight procedures.

The airport in Lviv appears to be better prepared than Kyiv Boryspil International Airport, where checks are chaotic, distances are poorly marked, and the overall impression is one of confusion. At Lviv Danylo Halytskyi International Airport, the personnel seem well-prepared and all procedures are conducted systematically.

However, this writer experienced miscommunication at the airport as regards contactless procedures. While the move to digital documents was announced by the Zelenskyy administration, in practice it does not work as designed. Airport officials do not recognize the digital passport in the government’s Diia app, which was advertised by the Ministry of Digital Transformation as a full-fledged substitute for a paper passport.

Ukrzaliznytsia will resume railway connections with Lviv on June 26. The first intercity trains and high-speed overnight trains will depart from Kyiv and Odesa. In addition, according to information on the online ticket sales service, trains that used to pass through Lviv in transit will now stop in the city. It is also possible to buy tickets to Kharkiv, Uzhhorod and Ivano-Frankivsk.

Commenting on the government’s decision to extend the adaptive quarantine until July 31, Prime Minister Denys Shmyhal said the move was triggered by the fact that the number of new patients in Ukraine has been increasing for a week. At the same time, he said, a “complete lockdown” destroys the economy; it can cause more irreparable harm than the coronavirus epidemic. Therefore, the Cabinet of Ministers extended the quarantine.

According to Mr. Shmyhal, society relaxed too early. “The easing of quarantine measures and the general quarantine fatigue” had a negative effect. “People forgot about being afraid of the coronavirus, and some started spreading myths and falsehoods that the coronavirus does not exist,” Mr. Shmyhal said. He added that Ukrainians must cultivate the habit of complying with safety measures, such as wearing masks in indoor spaces, hand disinfection and social distancing, and then the epidemic can be kept under control.

The prime minister also emphasized that, despite the continuation of the adaptive quarantine model, the government’s plans for the recovery of the economy remain strong: “The concept that the economy will see growth in the second half of the year remains relevant. We are doing everything to kick off this upturn. That is why we are talking about an adaptive quarantine, not a lockdown, which is a complete shutdown of the whole country, the whole economy. We will be cautious in approaching and maintaining a balance between economic stability and the development and preservation of human health and life. Otherwise, we might see incalculable consequences and losses.”

According to the data presented by the Public Health Center of Ukraine, as of June 24 there were 39,014 officially confirmed COVID-19 cases, 17,409 people have recovered and 1,051 patients have died. During the past 24 hours, 940 new cases were confirmed in Ukraine.