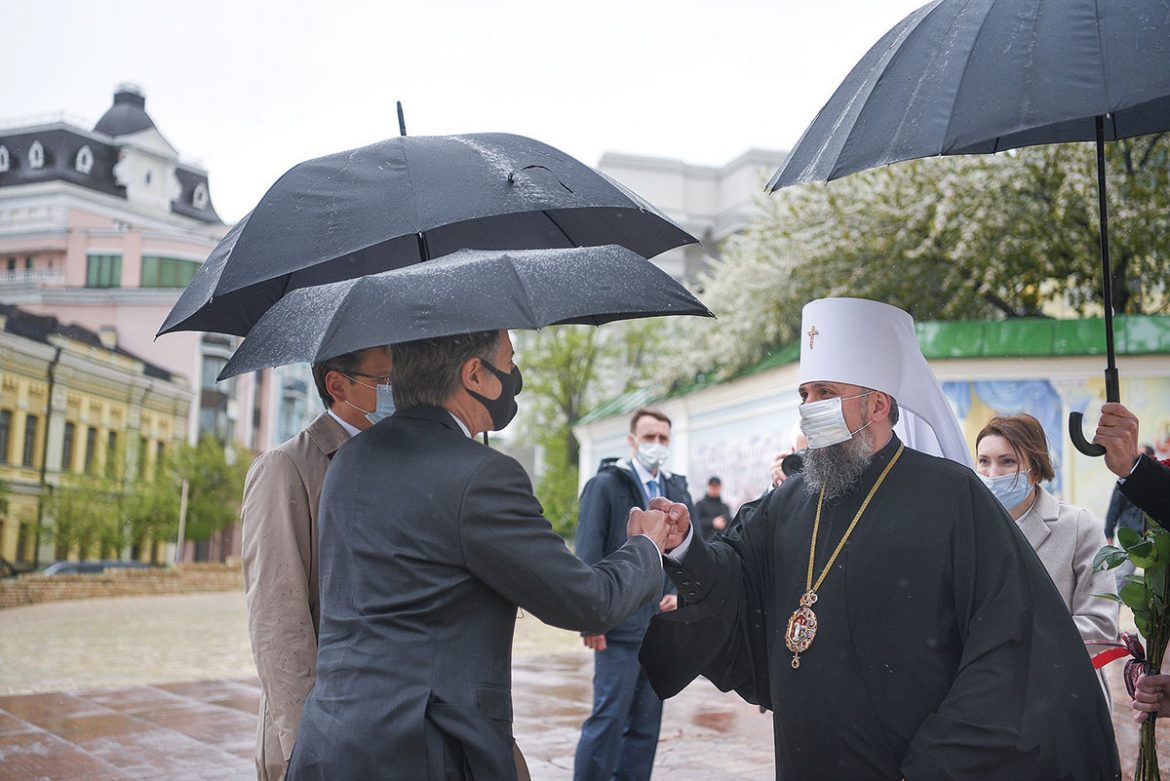 Metropolitan Epifaniy (right), head of the Orthodox Church of Ukraine, exchanges a fist bump with U.S. Secretary of State Antony Blinken during his visit to Ukraine on May 6.

PARSIPPANY, N.J. – The Orthodox Church of Ukraine has made efforts recently to counter an information campaign run by the Moscow Patriarchate that seeks to discredit Ecumenical Patriarch Bartholomew’s upcoming visit to Ukraine in August to celebrate the 30th anniversary of Ukraine’s renewed independence on August 24.

The Moscow Patriarchate has issued reports of “persecution” and “oppression” of the UOC-MP, placing blame on the OCU. It has also sought to create unrest following a pattern of behavior witnessed in Montenegro. The provocations have included staged rallies, religious marches and hoax “attacks” on Russian church parishioners to create a pretext for public outrage against the OCU. Moscow, in an effort to subvert the OCU, has relied on representatives of the “Kyiv Patriarchate,” which was abolished with the creation of the OCU, according to an April 24 report by the news agency Unian (www.unian.info/society/orthodoxy-moscow-patriarchate-plotting-to-hinder-bartholomew-s-visit-to-ukraine-11404468.html).

Moscow has increased its efforts to destabilize the OCU after the Ukrainian government shut down media outlets affiliated with Viktor Medvedchuk, who was recently accused of treason by Ukraine’s prosecutor-general for working in Russia’s interests in Ukraine.

More recent provocations were reported in Russia-occupied Crimea following the May 9 Victory Day holiday that is used by the ROC (and the Crimean Diocese of the UOC-MP) in Crimea to rally Soviet nostalgia and to paint the OCU as an external threat within Russia’s “near abroad.”

U.S. Secretary of State Antony Blinken’s visit to Ukraine on May 6 also sparked outrage from Bishop Viktor (Kotsaba) of the UOC-MP, who on May 6, via his Telegram channel, said Secretary Blinken’s call to “remove obstacles” was a command for the OCU to seize more UOC-MP churches, escalating civil tensions and religious confrontations.

Bishop Viktor also criticized the move to prevent UOC-MP chaplains from serving in the armed forces of Ukraine, per a May 8 report by the Religious Information Service of Ukraine (https://risu.ua/en/uoc-mp-said-that-the-visit-of-the-us-secretary-of-state-will-lead-to-a-new-wave-of-seizures-of-their-churches_n118368).

Mr. Blinken met with Metropolitan Epifaniy at St. Michael the Golden-Domed Cathedral in Kyiv on May 6, where the metropolitan thanked the U.S. for supporting Ukraine’s effort to fight against Russia’s latest aggressive military escalation along its land and maritime borders.

The Russian military continues to pose a threat to Ukraine, where human rights violations on Ukrainian territory in Russia-occupied Crimea and the Donbas have continued. The OCU leader stressed the role the U.S. can play in consolidating international support for Ukraine, increasing pressure using economic sanctions aimed at further restricting Russia’s actions and restoring Ukraine’s territorial integrity, according to a May 6 report from the news site Pomisna.info.

On December 11, 2020, Valentin Lukya­nik’s “All-Ukrainian Orthodox Brotherhood of the Holy Archangel of God Michael” attempted to pass off as representative of the UOC-MP the actions of brotherhood members who burned an effigy of Patriarch Bartholomew on Sophia Square that same day.

However, Metropolitan Onufriy of the UOC-MP issued a letter on January 28 that refuted Mr. Lukyanik’s, writing that, “We remind you that V. Lukyanik and the All-Ukrainian Orthodox Brotherhood have nothing to do with the [Ukrainian Orthodox Church-Moscow Patriarchate] and do not have our blessing for their activities…

Lukyanik’s behavior testifies that he is a provocateur and a swindler who misleads believers.”

Moscow has also sought to influence the proposed renaming of the UOC-MP to the Russian Orthodox Church in Ukraine. Representatives of the UOC-MP delivered an appeal to President Volodymyr Zelen­skyy that was reportedly signed by more than 1 million citizens of Ukraine that denounced what it said was the persecution of the UOC-MP, and called to repeal the law that forces the UOC-MP to change its name to more accurately reflect its subordination to the ROC.

Additional external pressure has been put on the OCU from Russia-friendly Serbia, where Bishop Irenaus (Bluovic) of the Serbian Orthodox Church has called on Patriarch Bartholomew to convene a pan-Orthodox council to resolve the issue of the canonical status of the OCU. The move came after Serbia and Russia refused to attend a 2016 pan-Orthodox Council in Crete, a meeting that was at least 50 years in the making.

In response to the Serbian bishop’s comments, Archbishop Yevstratiy (Zorya), spokesman for the OCU, on May 6 wrote on his Facebook page: “The scandalous statement of Bishop Irenaeus (Bulovic) of Backa, hierarch of the Serbian Patriarchate, regarding the proposals of the Ecumenical Patriarch to ‘withdraw’ the autocephaly of the OCU, as a prerequisite for the ‘powerful growth’ of the Patriarch’s authority in the world, is not really his personal opinion but originates from Moscow.

“Just as the ‘Amman meeting’ was inspired by Moscow and continues to fuel this stillborn initiative, it also directly or indirectly nurtured the statement of the Bishop of Backa in order to demonstrate the direction of its own aspirations.

“However, both the face of the hierarch and the content of the statement are chosen such that they can only cause irritation on the Phanar.

“It is well known that it was Bishop Irenaeus (Bulovic) who actively tried to disrupt the participation of the Serbian Church in the Pan-Orthodox Council of 2016. Perhaps among the various hierarchs of local churches, the attitude towards him in Constantinople in terms of diplomatic rejection can only be compared with the chief of ‘diplomacy’ of the Russian Orthodox Church, Metropolitan Hilarion (Alfeyev).

“The very content of the statement with the proposal to ‘withdraw recognition’ of the OCU is generally absurd. Equally, he could have immediately called on the Patriarch to transfer the title of ‘Ecume­nical’ and the Primacy to the Primate of the Russian Orthodox Church. This would be the practical consequence of implementing the extravagant appeal of the Bishop of Backa.

“Judging by the ‘Amman’ initiatives and similar statements, Moscow continues to remain disconnected from reality and is trying to drag other churches into its fantasy world. But no matter how nice such worlds may seem, they are not able to substitute reality. Which is that the OCU is and will be a diptychial autocephalous church. And everyone needs to proceed from this constant, so that because of exorbitant ambitions, in the end, they don’t end up at a broken trough, like the haughty old woman from Pushkin’s fairy tale,” Archbishop Yevstratiy wrote.

Patriarch Bartholomew, in an interview on Georgian state television TVFormula on May 2, asserted the primacy of the Ecumenical Patriarchate when it comes to decisions on granting autocephaly. The Moscow Patriarchate, he underscored, as in ideas such as the ROC granting autocephaly to the Russia-grabbed Abkhazia region of Georgia, would overstep the exclusive prerogative of Constantinople. As reported by fanarion.blogspot.com, the Ecumenical Patriarch clarified that: “The churches of Abkhazia and South Ossetia are under the jurisdiction of the Georgian Orthodox Church. It is not right that the Russian Orthodox Church intervened.” The interview was conducted by Giorgi Targamadze and was broadcast on May 2.

Turkish authorities do not allow the use of the term or title “Ecumenical” for any religious activity whatsoever despite the fact that it has been used by Christians since the 6th century and recognized throughout the world. Turkey regards the Ecumenical Patriarchate as an institution whose leader is seen as the spiritual head of Orthodox Christians in Turkey alone rather than the leader of 300 million Orthodox Christians worldwide.

Metropolitan Epifaniy has responded personally to Moscow’s misinformation campaign in an April 24 interview with Radio Svoboda’s Inna Kuznetsova, asserting that, per the terms of the Tomos of Autoce­phaly for the OCU, all of the Orthodox churches on the territory of Ukraine belong to the OCU. (https://www.radiosvoboda.org/a/epifaniy-vsi-pravoslavni-parafiyi-v-ukrayini-nalezhat-ptsu/31219904.html)

In the same interview, the head of the OCU said that the Moscow Patriarchate did not recognize the historical timeline of events from the Baptism of Rus’ in 988 by Grand Prince Volodymyr the Great. It was the Orthodox Church of Ukraine that is the Mother Church in relation to the Russian Orthodox Church, Metropolitan Epifaniy continued.
The mass transition of parishes from the UOC-MP to the OCU will begin when the state at the level of oblast, regional state administrations will not block these processes, and the courts will make fair decisions, said Metropolitan Epifaniy according to a May 5 report in Religiyna Pravda.

“I talked to representatives of communities that are ready to join the OCU. But they expect this process to become available,” Metropolitan Epifaniy said. “For example, not a single crossing has been registered in the Kyiv region in two years. Despite the fact that many communities have a desire to move. But they see that the regional state administration does not consider their appeals and does not take legal actions regarding re-registration.”

According to Metropolitan Epifaniy, it is necessary that the state at the level of regions and regional state administrations does not block these processes and that the courts make fair decisions.

He also noted the importance of the high-profile decision of the Supreme Court regarding the community of the village of Sutkovtsy in the Khmelnytsky region.

“…in the case of the village of Sutkovtsy in Khmelnytsky, where the priest of the UOC-MP allegedly won in the courts. But when the community appealed to the Supreme Court, the Grand Chamber recognized the previous decisions of the courts as illegal. This makes it possible to form a certain legal practice, and lower courts should be guided by the decision of the Supreme Court,” Metropolitan Epifaniy said.

He noted that the OCU abides by decisions made in the legal field.

“We are moving only in the legal field. We do not want lawlessness. We want everything to happen peacefully and calmly,” the head of the OCU said, per May 6 reports from the Religious Information Service of Ukraine and Religiyna Pravda (https://risu.ua/en/authorities-deliberately-block-transitions-from-the-uoc-mp-to-the-ocu-for-months—metropolitan-epifaniy_n118299; and https://religionpravda.com.ua/?p=68001).

Metropolitan Epifaniy spoke further about the issue during a May 1 interview on the program “Rendezvous with Yanina Sokolova” on Ukrainian TV station Channel 5, according to Religiyna Pravda (https://religionpravda.com.ua/?p=67900)

“For some reason, in [Russian President Vladimir] Putin’s recent statement, we heard that the Russian Orthodox Church, not the UOC [-MP], seems to be being persecuted in Ukraine. Mr. Putin clearly emphasizes and recognizes that this is the Russian Orthodox Church in Ukraine. If he recognizes it as his part, then he also influences it. Because the Church, whose center is located in the aggressor country’s heart, in Moscow, cannot serve the interests of the Ukrainian people,” the hierarch said.

Therefore, Metropolitan Epifaniy said, the Moscow Patriarchate in Ukraine is operating outside of the law and religious canons.

Ukraine’s Deputy Minister of Foreign Affairs Vasyl Bodnar visited Ecumenical Patriarch Bartholomew in Istanbul, accompanied by the Consul General Oleksandr Gaman and the Consul of Ukraine in Istanbul Serhii Revenko. Mr. Bodnar conveyed Easter greetings from Ukrainian President Volodymyr Zelenskyy to the Ecumenical Patriarch. Afterwards, they discussed the schedule of the visit the Ecumenical Patriarch will pay to Kyiv in August. Elder Metropolitan Emmanuel of Chalcedon and Chief Secretary of the Holy Synod Grigorios Fraggakis also attended the meeting, per a May 18 report in the Orthodox Times.