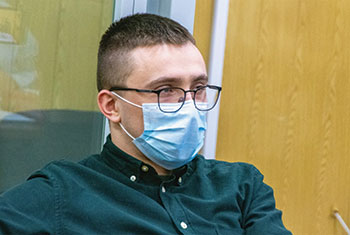 Serhiy Sternenko in court in May 2021.

Serhiy Sternenko in court in May 2021.

KYIV – An Odesa appeals court on May 31 acquitted Serhiy Sternenko and Ruslan Demchuk on charges of robbing and torturing local deputy Serhiy Shcherbych in the spring of 2015. The court, however, handed Mr. Sternenko a one-year suspended sentence for possession of an illegal weapon. It also upheld a lower court’s kidnapping verdict against Mr. Sternenko.

In response to the ruling, Mr. Sternenko said he was sentenced “for one bullet.” In passing the sentence, the appeals court judge said the presence of ammunition in the quantity of one bullet nonetheless deserved punishment.

After the trial, Mr. Sternenko said that he would appeal the court’s decision to the Supreme Court of Ukraine.

Previously, the Primorsky District Court of Odesa found Messrs. Sternenko and Demchuk guilty on all charges in an initial ruling on February 23. Both men were sentenced to seven years and three months in prison for abducting and robbing Mr. Shcherbych.

According to prosecutors, on April 24, 2015, the then-members of Right Sector (a far-right Ukrainian nationalist political party and paramilitary movement) wanted to seize Mr. Shcherbych’s bank card and phone. According to Mr. Shcherbych, Messrs. Sternenko and Demchuk were trying to force him to resign from his post as a local deputy. Mr. Shcherbych was also the head of the district branch of the pro-Russian Rodina party.

Mr. Sternenko, against whom several criminal cases have been filed, called his prosecution a “300-hryvnia case” because, according to the prosecution, they stole around 300 hryvnias (about $11) from Mr. Shcherbych. Despite the conviction and ruling by the appeals court, Messrs. Sternenko and Demchuk maintain their innocence.

According to police investigators, they and other unidentified persons put Mr. Shcherbych in a car and took him to a basement where they beat and tortured him. The shot a gun over his head, pinched a finger on his right hand with pliers and caused a craniocerebral injury and concussion.

In total, four criminal cases have been filed against Mr. Sternenko. He has faced charges for kidnapping, rioting and beating a police officer, drug distribution and murder. Mr. Sternenko maintains that the killing of his attacker was done in self-defense. Mr. Sternenko, a former leader of the Odesa Right Sector, has pled innocent to all of the charges.

The appeals court ruling acquitted both Messrs. Sternenko and Demchuk of kidnapping. The court found that the original sentence could not be applied due to the expiration of the statute of limitations, which in this case was five years.

The Odesa Court of Appeal’s decision did not acquit the former members of the “Right Sector” completely, though it did significantly commute the sentence and dropped some of the charges. Messrs. Sternenko and Demchuk have not served prison time.

During the one-year period of the suspended sentence, Mr. Sternenko will be monitored by a probationary officer. He must periodically report to a supervisor and report any change of residence, work or study.

If the court finds that Mr. Sternenko violates any of the probationary rules or commits any additional crimes, including civil, the court may order that Mr. Sternenko serve his original three-year prison sentence. Mr. Sternenko will now also have a criminal record, which will limit his rights, even if he does not end up in prison.

Conviction on a criminal charge, in particular, does not allow a person in Ukraine to run for parliament and it limits an individual from serving in various public offices. The conviction for Mr. Sternenko, who has a legal education, will likely affect his career.

Three other cases against Mr. Sternenko are currently pending in the courts, none of which have yet been decided.

In another case, Mr. Sternenko is accused of beating the head of the Odesa police Dmytro Holovin. It is said that during the clashes at mass rallies in Odesa, Mr. Sternenko allegedly struck Mr. Holovin in the legs.

That investigation also alleges that Mr. Sternenko collected money from the distribution of illegal drugs. Mr. Sternenko has called that case against him a fabrication. The case is still being heard in court.

In May 2018, another case was opened against Mr. Sternenko for the premeditated murder of Ivan Kuznetsov, who attacked him in Odesa on May 24. Mr. Kuznetsov died of stab wounds. A second attacker, Oleksandr Isaykul, was also injured but escaped. Mr. Sternenko has said that Mr. Kuzentsov’s murder was committed in self-defense.

Members of Ukraine’s Verkhovna Rada have agreed with Mr. Sternenko.

“I support Serhiy because this is not his personal case; this is a matter that is important for each of us,” said Roman Lozynskyi, a member of parliament who posted bail for Mr. Sternenko in that case.

“Because everyone who shows an active public position, everyone who fights for justice, everyone who is an activist, becomes or can become the object of hunting, attacks and pressure,” Mr. Lozynskyi said. “We have seen dozens of attacks on activists.

Unfortunately, some of them have already ended in death – we know the case of Katya Handziuk, who was doused with acid. Serhiy was attacked three times. After the third attempt, none of his attackers are being tried now, but Serhiy, who defended himself, is.”

“It seems to me that this is a concern for each of us,” Mr. Lozynskyi said. “A court decision is an indicator of whether we have the right to defend ourselves if we are attacked and will we be convicted if they want to condemn us. We must go to the end. And I am together with Serhiy and with everyone who supports the right to necessary self-defense.”

Protesters in several Ukrainian cities took up the issue on May 30 under the banner “Show us justice.” Hundreds of people gathered in Kyiv near the Presidential Office. Activists also showed support for Mr. Sternenko with demonstrations in Rivne, Vinnytsia, Lviv, Dnipro, Kropyvnyts­kyi, Kharkiv, Ivano-Frankivsk, Poltava, Henichesk and Zaporizhia.

Participants chanted slogans, lit fireworks and carried posters with various slogans: “Avakov Chort” (Avakov is the Devil), “Freedom for Sternenko,” “Show us justice,” among others. Activists also called for a fair trial because they believed the case against Mr. Sternenko was politically motivated.

During the demonstration, Mr. Sternen­ko addressed protesters by phone.

“I would very much like to stand next to each of you. I am sure that all this is temporary,” he said.

Mr. Sternenko said that he had two completely different feelings before the court decision.

“On the one hand, I am very upset. I don’t like the fact that there is politically motivated persecution in our country, that we have not fled so far in terms of repression from our northern and eastern neighbors in some places. However, I also have very good feelings and premonitions because I see your support, I feel it, I see that there are many of you and that, when needed, you can speak loudly so that you can be heard, you can protect our rights,” Mr. Sternenko told his supporters.

But the activist also said he believed Ukrainians were the key to safeguarding citizens’ rights and freedoms.

Prior to the demonstrations, dozens of police cars, the National Guard and police vans moved into the government quarter. The demonstration lasted about an hour, afterward activists and law enforcement officers left the square.

“Real judicial reform is needed to ensure that there are no more such cases and that it is not necessary to take to the streets every time. The reform should begin with a reload of the Supreme Council of Justice and the High Qualification Commission of Judges,” Mr. Lozynskyi said.

“This is a real start, not the one [Mr.] Zelenskyy wants, reforming some other parts of the judicial system, leaving the root of the problem untouched. Only by changing the approach to the formation of the Supreme Council of Justice and the High Qualifications Commission of Judges can we begin to reset the judicial system, from which Stalinist judges, who are involved in the case of Serhiy Sternenko, must disappear,” Mr. Lozynskyi said. “Judges with a lousy reputation, judges who have been involved in corrupt decisions, and judges who do not have a sufficiently professional level must disappear. It is crucial so that such matters as the Sternenko case do not exist in our country.”

“As long as this process continues, we all need to take to the streets for every real important event that will show the injustice and weakness of our unreformed system. The fight is still going on,” Mr. Lozynskyi said.