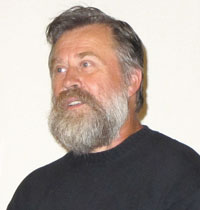 KYIV – Oleh Lysheha, a Ukrainian poet, playwright and translator, the first Ukrainian to receive the PEN Award for Poetry in Translation, died in Kyiv on December 17. He was 65.

His works are known to audiences in the United States thanks in large measure to Yara Arts Group, which presented bilingual (Ukrainian-English) versions of his poetry in its productions.

He was born in Tysmenytsia, Ukraine, on October 30, 1949, into a family of teachers. In 1968 Mr. Lysheha entered Lviv University, studying foreign languages, and during his last year there was expelled for his participation in an unofficial literary circle, Lviv Bohema. As punishment, he was drafted into the Soviet army. After serving in the military he returned to his birthplace and worked at a local factory.

He later returned to Lviv and then moved to Kyiv, where he worked as a technical employee at the Karpenko Karyi Kyiv Theatrical Institute.

In 1997-1998, Mr. Lysheha was a visiting Fulbright Scholar at Penn State University.

“The Selected Poems of Oleh Lysheha” (Harvard University Press, 1999), the work of Mr. Lysheha and his co-translator James Brasfield of Penn State, received the PEN Award for Poetry in Translation in 2000. Mr. Lysheha’s drama “Friend Li Po, Brother Tu Fu” was also included in that publication. In 2002, Mr. Lysheha published “To Snow and Fire.”

He is known also for having translated into the Ukrainian language works by T. S. Eliot and Ezra Pound, and is the co-author of a book of translations from Chinese, “The Stories of Ancient China.”

In 1998 Yara presented “A Celebration of the Poetry of Oleh Lysheha.” In 2003 Ms. Tkacz staged “Swan” as a full production at La MaMa Experimental Theater in New York.