OTTAWA – Most film directors prefer to tell their stories through their cinematic creations and would much rather be behind the camera than in front of it. But a real-time drama, filled with tragedy, conflict and a relatively happy ending, made Ukrainian filmmaker Oleh Sentsov the unwitting subject of what has become the greatest story of his life, thus far.

Arrested at his home in Symferopol, Crimea, in May 2014, Mr. Sentsov – who three years earlier had released his first feature-length film, “Gamer,” shot at a real computer-game tournament – was charged, in part, with plotting a terrorist attack against railway bridges, power lines and public monuments, and was accused of being a radical right-wing extremist. During his July 2015 trial, speaking from the prisoner’s box, behind bars, Mr. Sentsov claimed the charges against him were “fabricated and political,” based on claims from “two suspects whose testimony was obtained through torture.”

A month later, a Russian court sentenced him to 20 years’ imprisonment. Last September, Mr. Sentsov was released as part of a prisoner exchange between Russia and Ukraine after spending four years in prison – half of that term in Russia’s northernmost prison in the western Siberian region where, in 2018, he went on a 145-day hunger strike.

Some of the trauma of the time is captured by Russian filmmaker Askold Kurov in a 2017 documentary titled, “The Trial: The State of Russia vs. Oleg Sentsov,” which was screened at the Human Rights Watch Film Festival in Toronto on February 3. The 43-year-old defendant in that proceeding was present, and he participated in a question-and-answer session with the audience in which he has unofficially become the prosecution against Russia.

He outlined his case during his trial in which he declared that he did not recognize Russia’s annexation of Crimea or the Russian military occupation of land he considers to be Ukrainian territory. 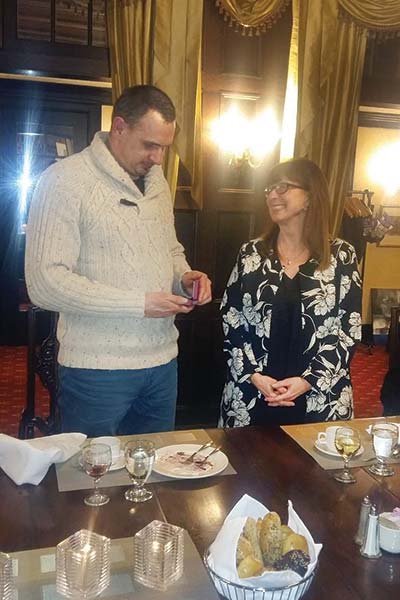 Mr. Sentsov amplified his position while in Canada in an interview with The Canadian Press in which he told reporter Mike Blanchfield that he feels responsible for “continuous Russian aggression,” which is why, he said, “I can’t stop.”

As he wrote while incarcerated, “if we are supposed to become nails in the coffin of a tyrant, I’d like to be one of those nails,” vowed Mr. Sentsov. “Just know that this particular one won’t bend.”

While in Canada, he hammered home his belief that continued global pressure on Russia will convince the country’s citizens to drive Vladimir Putin from power because, as Mr. Sentsov told Mr. Blanchfield, the Russian president “only understands the language of force.”

The filmmaker-turned-political activist’s message received support on Parliament Hill, where Mr. Sentsov met with Prime Minister Justin Trudeau and Deputy Prime Minister Chrystia Freeland, a Ukrainian Canadian, who as foreign affairs minister had issued a statement in which she welcomed the release on September 7, 2019, of Mr. Sentsov and 34 other political prisoners held by Russia.

As Mr. Blanchfield reported, at the start of the February 4 sit-down between Mr. Trudeau and Mr. Sentsov, the prime minister praised his 6-foot-4, ethnic-Russian Ukrainian guest for his “strong voice” and “commitment to sharing [his] story in a way that advances the cause of a strong Ukraine.”

During his time in Canada, from February 2 to 5, Mr. Sentsov attended an event organized by the League of Ukrainian Canadians in Toronto, and participated in a community meeting in Ottawa co-hosted by three Members of Parliament – including two of Ukrainian descent, Liberal Yvan Baker and Conservative James Bezan – and the Ukrainian Canadian Congress’s Ottawa branch.

He spoke of the plight of the more than 90 Ukrainians – many of them Crimean Tatars – jailed in Crimea and Russia, along with the hundreds of Ukrainians imprisoned in the besieged eastern Ukrainian regions of Donetsk and Luhansk.

But Mr. Sentsov is not loquacious, as his Canadian hosts discovered.

“He is reserved and soft-spoken,” said John Packer, an associate professor of law and director of the Human Rights Research and Education Center at the University of Ottawa. Along with the Chair of Ukrainian Studies, the center presented what was billed as “A Conversation with Oleh Sentsov” on February 5. Dominique Arel, who holds the Ukrainian Studies Chair, had the task of trying to elicit a dialogue with the filmmaker who relied on Russian-to-English translation during his appearance.

“He responded to questions with one word or a shrug of the shoulders,” said Prof. Packer in an interview. “You’ve got this major figure that we’re all on the edge of our seats to hear, and Dominique asked him three times to comment on what he meant when he called for people to act with courage in his closing remarks before he was sentenced at his trial.”

“Oleh is a very straight-speaking guy and not a man of many words – but his words are direct,” said Prof. Packer. “So when Dominique asked him about what it means to be courageous, Oleh didn’t know how else to describe it. It seems self-evident to him: you speak out and do the right thing.”

In the documentary about the trial, Mr. Sentsov tells the court that “the greatest sin on earth is cowardice.”

“I don’t know what the point of having principles is if you aren’t prepared to suffer or even to die for them,” he says.

As Ukrainian World Congress President Paul Grod explained, Mr. Sentsov’s North American visit was a matter of “taking his story to the road.”

“He has a very powerful story. He’s an ethnic Russian, who grew up in Crimea, who stood up for the Maidan – the Revolution of Dignity – and stood up for the cause of the Ukrainian people and stood up to Russian tyranny when they invaded Crimea, and paid the political price of being imprisoned for a long time,” said Mr. Grod, former president of the Ukrainian Canadian Congress. “He wants to make sure that the world is aware of the current situation in Ukraine – that it’s not a separatist movement, but a Russian-engineered aggression meant to destabilize Ukraine.”

Mr. Grod, who is on a list of 13 Canadians, among them Deputy Prime Minister Freeland, barred from entering Russia, described Mr. Sentsov as an “intellectually deep person” and recalled when he first met him at the 16th annual Yalta European Strategy (YES) meeting in Kyiv last September.

“He was the surprise speaker, and in fact spoke before the president of Ukraine, who when he got up to speak, said that he wanted to yield his time to somebody who is very important to the Ukrainian people and introduced Oleh Sentsov,” said Mr. Grod, who was left with an impression similar to that of Prof. Packer.

“He’s a pretty monotone speaker and not a very dynamic orator. He’s not your Anthony Robbins-type of speaker, but he delivered a very powerful statement,” Mr. Grod remembered. “He brought out this jar, and it was painted blue and yellow, and he said he took it everywhere, when he was transferred from prison to prison, and it was his symbol of hope. He presented this jar to [President Volodymyr] Zelenskyy and said, ‘This is what kept me alive in Russian prisons and despite the fact the guards constantly took it away from me, I want you to have this so you remember what we the Ukrainians have gone through as a result of Russia’s aggression.’”

Mr. Grod said Mr. Sentsov presents himself as a “pro-Ukrainian, pro-civil society, pro-human rights individual who is not beholden to any political interests.”

And while he might have used his words sparingly in Canada, they packed considerable meaning.

“He’s in favor of an inclusive, not uni-national Ukraine,” explained Prof. Packer, who in 2018 was named the inaugural Neuberger-Jesin Professor of International Conflict Resolution at the University of Ottawa and in 1995-2004 served first as senior legal advisor and then the first director of the Office of the Organization for Security and Cooperation in Europe’s High Commissioner on National Minorities.

“I worked a lot in Crimea, and I don’t see how you could be otherwise. Aside from Crimean Tatars, you’ve had Armenians, Bulgarians and Greeks in Crimea historically for thousands of years.”

“I’m not sure people grasped what he was saying. But he’s really anti-authoritarian – and a proud Ukrainian in the civic sense of the word,” said Prof. Packer.

“Oleh is a person of an uncommon courage – but he is also reminding us of the necessity of it,” added Prof. Packer, harkening back to the words of 18th-century Irish philosopher and British parliamentarian Edmund Burke who said that “the only thing necessary for the triumph of evil is for good men to do nothing.”

Mr. Sentsov, said Prof. Packer, is “a flesh-and-blood example of a good man doing something by standing up and speaking the truth. And he does it without fanfare – just walking the talk – and not even talking much, which is very impressive in its simplicity and clarity.”