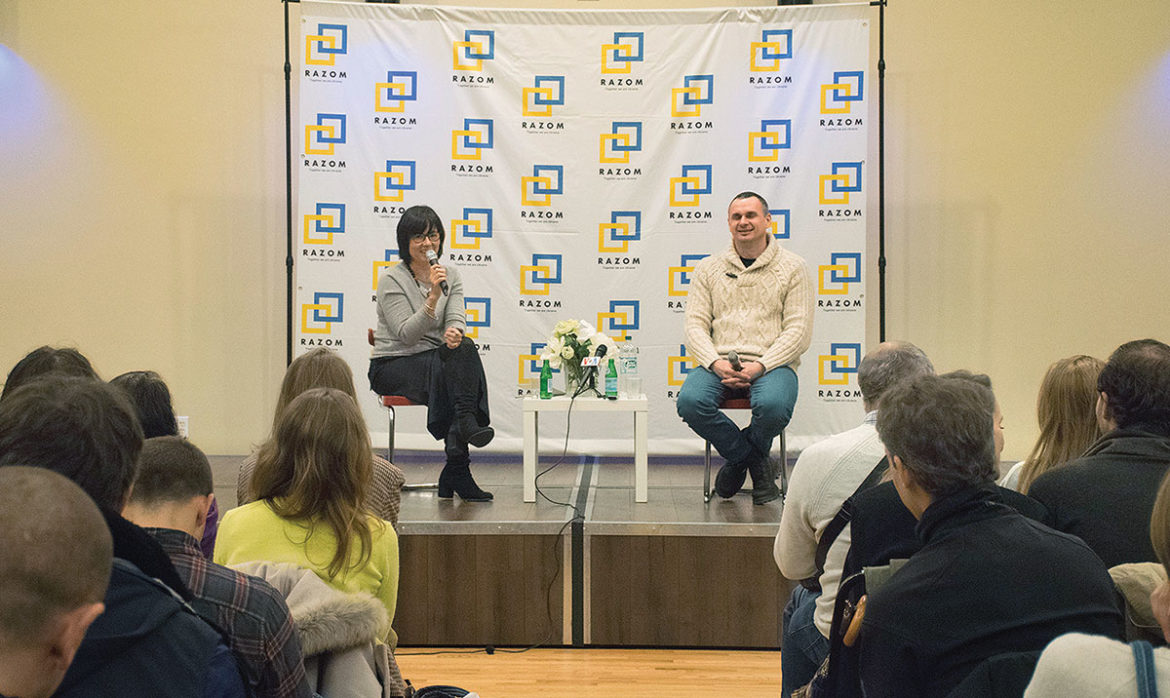 Oleh Sentsov during his presentation on January 25 in New York. The discussion was moderated by Razom volunteer Maria Genkin.

Since his release during a Ukraine-Russia prisoner exchange in September 2019, Mr. Sentsov has often stated publicly – most recently on January 22 during his appearance at the Davos Economic Forum in Switzerland – that he does not consider himself to be, foremost, a Russian political prisoner. He prefers to focus on his self-identity as a human rights activist and a fighter for Ukraine’s right to self-determination.

This position that Ukraine, and all those who consider themselves Ukrainian, must assume serious responsibility to help assure the nation’s success was Mr. Sentsov’s primary message on January 25.

While PEN America, a writer’s organization and freedom-of-speech advocacy group, is the main sponsor of Mr. Sentsov’s U.S. tour, Razom for Ukraine, an international network of volunteers dedicated to initiating projects that increase awareness about, and work for the betterment of, Ukraine hosted the event at the Ukrainian National Home.

Focus on freedom, not on me

Introducing Mr. Sentsov to a standing ovation by close to 300 guests, Razom board member Maryna Prykhodko stated from the outset that Mr. Sentsov was reluctant to focus on his past and would prefer to respond to questions about the present and future of Ukraine.

Mr. Sentsov, 43, spent much of his life in Crimea. He was arrested there in May 2014 by Russian occupying forces, transported in secret to Russia and then, on August 25, 2015, was found guilty on baseless charges of terrorism. His was sentenced to serve 20 years in a Russian prison.

When arrested, Mr. Sentsov, along with many others, had been protesting the illegal occupation of the Ukrainian peninsula by a stealth Russian military operation of unidentified soldiers, the now infamous “little green men.” In particular, Mr. Sentsov was a vocal critic of Russian President Vladimir Putin’s disregard for the sovereignty of Ukraine. Before his arrest, he was involved in delivering supplies and food to Ukrainian soldiers blockaded within their bases by Russia’s military.

In 2018, while still in prison, Mr. Sentsov began a 145-day hunger strike to increase international awareness of the arrest and imprisonment of Ukrainian civilians who exhibited even the mildest of protests against the Russian occupation in Crimea and the Donbas region of eastern Ukraine. Russia denied a request for Mr. Sentsov’s extradition to Ukraine on the grounds that, with the annexation of Crimea, he had become a Russian citizen and no longer had a home in Ukraine.

Acknowledging Mr. Sentsov’s request not to focus on his years in prison, Maria Genkin, a Razom volunteer who conducted an onstage interview before the audience, began with questions about Mr. Sentsov’s creative efforts, both as a filmmaker and a writer. She did comment, however, that Ukrainian poet Serhiy Zhadan has said, “Ukrainians become poets to talk about politics.”

Mr. Sentsov, in keeping with Mr. Zhadan’s observation, politely, albeit a bit reluctantly, answered Ms. Genkin’s original questions and then indicated his desire to move to the topics he felt to be more urgent: political prisoners being held in Russia, those being held by Russian-supported separatists in the Donbas, and the political situations in Ukraine and Russia.

“I do not think the attention should me on me,” noted Mr. Sentsov, continuing that there are still hundreds of prisoners in Russia and the Donbas. “The conditions of their detention are most difficult, and about them we know very little. I always start with this matter because this issue is most important to me.”

He underscored that the release of these prisoners is not only his primary concern, but also that of others who had been politically incarcerated in Russia. He currently works with several former political prisoners and NGOs towards this goal.

“I understood from the beginning of the Maidan that this was one of the most important moments in Ukraine’s history,” said Mr. Sentsov, adding that he had long realized that, in order for Ukraine to become fully independent, Ukraine’s prolonged existence as a post-Soviet state had to end.

According to Mr. Sentsov, the Maidan, also known as the Revolution of Dignity, spurred Moscow into action and “thanks to Putin, to his aggression, people have begun to unite,” to understand the importance of the Ukrainian language, of developing a distinct Ukrainian identity, embracing characteristics unique to Ukraine.

“For us, a new Ukrainian nation is being born. Now we have the possibility of genuine independence. [This is] not measured by the amount of bloodshed, but by the level of love for the country.” Mr. Sentsov, who identifies as ethnically Russian, continued, “To be Ukrainian, to be a proud citizen of Ukraine …does not matter whether one is a Galician, a Ukrainian, a Crimean Tatar, or a Russian …Ukrainians are those who want to be Ukrainian, those who want to defend Ukraine.”

In turn, Mr. Putin’s occupation of Crimea has divided people living on the peninsula, divided families and friends, especially among those who identify themselves as Russian. “A husband and wife supported [the occupation], but the son did not. … many were opposed to the occupation …they always felt themselves to be Ukrainian,” said Mr. Sentsov, adding that they soon realized the futility of public opposition.

“Russia showed its cruel face and people were simply afraid. … Any public voice against Putin, in Crimea is considered treason, and treason in Crimea is punished more harshly than in Russia. …in Crimea, people are arrested not for what they have done, or what they are doing, but for what they might do. …these are pre-emptive arrests.”

Mr. Sentsov clearly stated his position on relations between Ukraine and Russia. “A peace treaty is not possible because Putin’s goal is to destroy Ukraine’s independence, to make us a province of Russia. In 2014, he failed to do so with a military operation. So now, he acts politically, socially and economically. …We cannot succumb (to these provocations).”

Noting that he never stood against Russia, nor wishes to seek revenge against Mr. Putin, Mr. Sentsov said he believes Ukrainians must instead strive to influence Russians, to support Russia’s dissidents, to help “shake Russia from the inside.”

“We [Ukraine] cannot beat Putin militarily, that is clear. We must seek other means. …[Internationally], Putin wants to sit at the table and direct matters, except that he is being shunned. He is acting to be perceived as a ‘good guy,’ so that sanctions are lifted. That is why we [Ukrainians] must tell the world about his intentions, his actions, about his true face.”

The Russian president, Mr. Sentsov said, is trying to get Ukraine’s President Volodymyr Zelenskyy to go along with him. Mr. Putin knows he has more time and resources than does Mr. Zelenskyy, therefore Mr. Putin can wait. Nevertheless, above all else, Mr. Zelenskyy must remember that he was elected by the voters of Ukraine and that is where his allegiance must lie.

Mr. Sentsov said he is concerned that Mr. Zelenskyy will be outplayed. “His [Zelenskyy’s] mistake is that he thinks he can negotiate with Putin. However, this game has no rules. This is a game with a card shark.”

He offered similar advice to U.S. President Donald Trump. When asked, Mr. Sentsov demurred from commenting on the current political situation involving Ukraine in the ongoing presidential impeachment trial. However, he did state that if the American president thinks he can somehow negotiate with Mr. Putin, he is mistaken. “President Trump needs to understand that there is no negotiation with Putin. Ever. Putin does not negotiate.”

Modest, even self-deprecating in his responses to numerous questions, at one point, with a light sense of humor, Mr. Sentsov quipped, “I cannot be an expert on everything!”

Asked if he is considering entering politics, Mr. Sentsov’s response was a quick and simple “No.” Asked if he considered himself a hero, again, he replied, “No.” Asked if he felt obligated in any way to President Zelenskyy for negotiating his release, Mr. Sentsov paused and replied, “No, I do not feel personally obligated, however, I am deeply grateful to him and to everyone who worked for my release.” Then he again pledged to work for the release of others.

Mr. Sentsov’s low-key persona belies a deeper inner strength. He stated that having gone through imprisonment in Russia, he is no longer afraid of anything. As Mr. Sentsov wrote in one of his letters from prison in 2016, “If we are meant to become nails in the coffin of a tyrant, I would like to become one of those nails. Just know that this particular nail will not bend.”