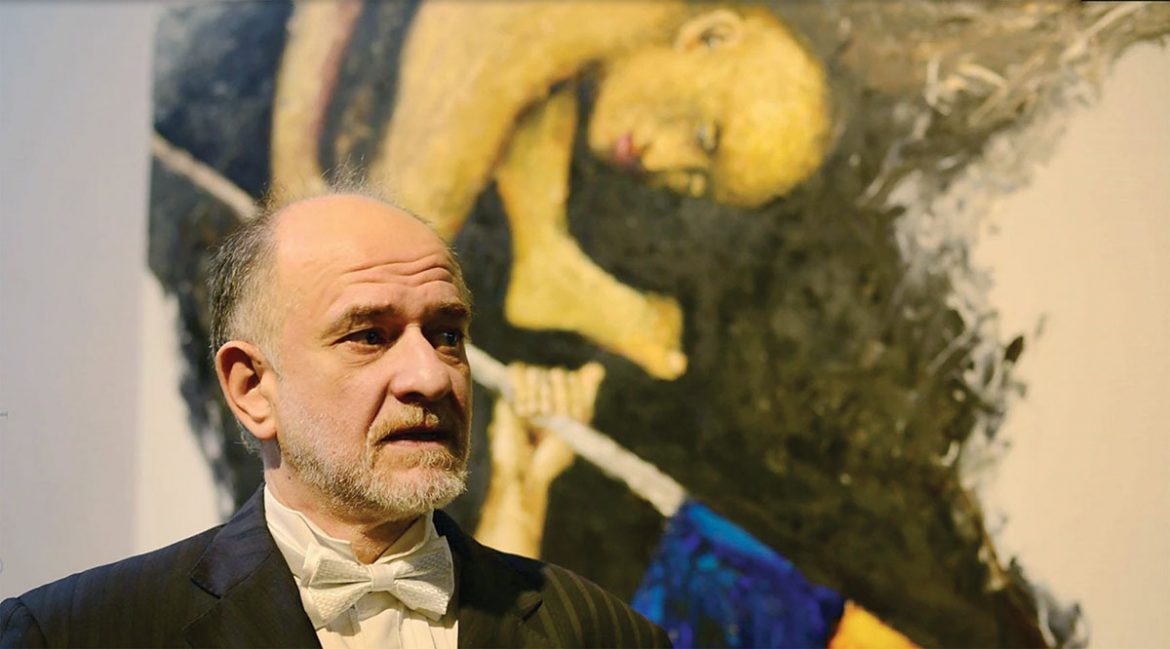 Oleksandr Roytburd in front of his artwork.

LVIV – Oleksandr Roytburd, a postmodern artist and a leader of the Ukrainian “New Wave” artistic movement, died on August 8. His death was first reported by the Odesa Fine Arts Museum where Mr. Roytburd was a director since 2018. He was 59.

Mr. Roytburd had cancer but did not talk publicly about his health. Only his close friends were aware of his condition. Mr. Roytburd’s health further deteriorated after he contracted COVID-19 in the spring. He was insistent about not going to the hospital.

“In the position of the art museum director, Oleksandr Roytburd proved by his example that the museum could be made an art space of interest to a wide audience. You need to approach your cause with your soul and not be afraid to experiment!” Mr. Zelenskyy wrote on his Facebook page.

“Oleksandr Roytburd was not afraid of experiments also in his artwork. His works are full of love, thirst for life, often irony and even self-irony. The artist’s death is a great loss for Ukrainian art. But he will forever remain in our hearts, and his paintings – in our cultural heritage,” Mr. Zelenskyy wrote.

Mr. Roytburd’s works are housed in world-class museums, including the Museum of Modern Art in New York. In the second half of the 1990s, having experience in painting, curating and video art, Mr. Roytburd moved to New York but soon returned to Ukraine.

He lived in his hometown Odesa in recent years, turning the local art museum into a city forum and public art space. Meanwhile, he continued to create and exhibit his works throughout Ukraine.

Mr. Roytburd was born in Odesa in 1961. He graduated from the art and graphic faculty of the Odesa Pedagogical Institute and was a member of the National Union of Artists of Ukraine.

He began his artistic career in the late 1970s in Odesa, but a new stage of his work began with the 1987 Kyiv exhibition “Youth of the Country.” The political upheaval of the 1980s and 1990s and the artists’ experiments with style gave rise to a phenomenon of the Ukrainian “New Wave,” a movement which Mr. Roytburd led.

Mr. Roytburd became the founder of the New Art Association, was the head of the board of the Soros Center for Contempo­rary Art in Odesa, and the director of the Marat Gelman Gallery in Kyiv.

It was then that he became interested in video art and created several works, one of which, “Psychedelic invasion of the battleship Potemkin in the tautological hallucination of Sergei Eisenstein,” was selected for entry in the main program of the Venice Biennale (2001). It was also purchased and is now in the collection of the New York Museum of Modern Art (MOMA).

His works with biblical motifs – unspoken in the form of untitled paintings – symbols of mirrors and bizarrely elongated body parts, are nearly unforgettable for viewers.

“I portray the world the way I portray it,” the artist once said.

Mr. Roytburd also created vivid still-life paintings, which he called “portraits of things.” Critics noted that in such paintings there was a philosophical idea and a unique, purely Roytburdian melancholic palette of colors.

The Osnova publishing house once tried to encapsulate Mr. Roytburd’s entire career in one book. What resulted was a 444-page volume of the artist’s work.

Mr. Roytburd was also one of the most expensive artists in Ukrainian. In 2009, his work “Farewell, Caravaggio” sold for $97,000 at the Phillips de Pury & Company auction. In recent years, despite active work directing the museum, he did not stop creating. One of his last exhibitions was the project “Exercises for libertinism” at the Shcherbenko Art Center in Kyiv.

At the end of 2020, several cities in Ukraine also hosted the exhibition “Chronicles of the Plague Year.” The exhibit included nearly four dozen recent works by the artist. Mr. Roytburd said that an impetus for the project came as a result of quarantine restrictions during the pandemic.

Mr. Roytburd also took part in the Revolution of Dignity in 2014, and he curated the post-revolutionary exhibition “Code of Mezhyhirya,” named for the lavish mansion once owned by former Ukrainian president Viktor Yanukovych, who fled Ukraine for Russia following the revolution.

On December 6, 2017, Mr. Roytburd won the competition for the position of director of the Odesa Fine Arts Museum. On March 19, 2018, the head of the Odesa regional state administration, Maksym Stepanov (who in 2020 became Ukraine’s healthcare minister), signed a five-year contract with Mr. Roytburd, appointing him director of the museum. He decided to start the institution’s modernization with ordinary but essential steps – first repairing the museum’s roof, then expanding its exposition space, and next placing exhibits in separate halls.

In less than a year under Mr. Roytburd’s direction, the museum earned 2 million hryvnias more than in the previous year. However, he was fired before his five-year contract expired. The Odesa regional council, which comprised representatives of the pro-Russian party “Opposition Bloc – For Life,” made the decision to remove the artist from his position. However, the artist continued to perform his duties anyway, filing an appeal in court.

The dismissal caused outrage among the cultural and non-profit sectors in Odesa. More than 1,000 people came to the rally to defend Mr. Roytburd as museum director.

Eventually, it the protests grew so large that the artist himself called these events “the cultural Maidan of modern Ukraine” because it was a result of cultural concerns that many people banded together as they had done during previous protests. Mr. Roytburd’s supporters included the poet Boris Khersonsky, Lviv mayor Andriy Sadovy and Mikheil Saakashvili, the former president of Georgia and later the governor of the Odesa region.

In December 2020, deputies of the regional council revoked the decision to dismiss the artist from the post of director, and the Supreme Court ruled that Mr. Roytburd’s dismissal was not legal.

In late 2020, Mr. Roytburd became a deputy of the Odesa regional council. He was a member of former Ukrainian president Petro Poroshenko’s European Solidarity party.

“A genius and an extraordinary man passed away,” said Minister of Culture and Information Policy Oleksandr Tkachenko. “I remember how we recently walked through the halls of his museum. He was inspired to talk about an exhibition of contemporary art that is about to begin, and today the great artist is no longer with us.”

According to Mr. Tkachenko, Mr. Roytburd had been feeling ill recently, but he had been working and dreaming of creating a contemporary art museum in Odesa.

“He was ill but did not lose his strength of spirit, sense of humor, and had big plans – not only the construction and restoration of the Odesa Fine Arts Museum. He was inspired by the idea of creating a museum of contemporary art in Odesa. We all have to make his dream come true now, in his memory,” Mr. Tkachenko said in announcing plans for a new modern art museum.

“A year ago, we came up with the idea to publish a collection of his poems. Sasha loved to read them at feasts. He read with inspiration, fun and persuasiveness. So, the idea of the book could not fail to arise,” Mr. Zhadan wrote on his Facebook page.

“Sash, you designed my collection; let me design yours,” Mr. Zhadan recalled saying during one of their conversations.

“Sasha grimaced, but agreed,” Mr. Zhadan said. “I collected the manuscript and read it. I started drawing. These were strange, interesting poems, not quite similar to his paintings, in which there was a lot of eros, a lot of Odesa, a lot of sadness.”