LVIV – Eugene Walden and his daughter traveled to Lviv from the U.S.A. He has taken part twice – during the summers of 2018 and 2019 – in the School of Ukrainian Language and Culture of the Ukrainian Catholic University and does not plan on stopping his studies. In a conversation last fall with this writer, he shared details about what inspires him in this endeavor and what impressions remain after his time spent at UCU. 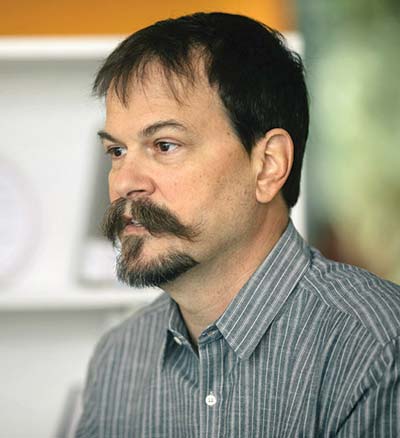 Eugene Walden, an IT specialist from the U.S. who has studied Ukrainian language at the Ukrainian Catholic University in Lviv.

What motivated you to study the Ukrainian language?

My mother was born in Ukraine and I in a town near Detroit, Michigan, U.S.A. When I was little, I knew some Ukrainian. I learned it from Mama, who spoke it with her parents. Later I entered the University of Michigan, which has a special Ukrainian language program, and met noted professor Assya Humesky, and there also I returned to the language. I finished university very long ago, 30 years, and had no opportunities to practice my skills further.

Today I’m the father of two daughters. The older loves to sing, like me, because in childhood my grandpa taught me patriotic Kozak songs. By the way, in Detroit there’s the famous Ukrainian Bandurist Chorus, which moved to America after the second world war – I consider them very talented singers. In addition, I like our professional church choir.

As for my younger daughter, Julia, five years ago she got interested in my Ukrainian roots, of which I am very proud! When she was 16, I became acquainted with a professor at the University of California, Berkeley, Marika Kuzma, director of the chamber choir, who introduced me to her brother, Alex, who works with UCU. I also found out about this university and its School of Ukrainian Language and Culture. When I suggested to my daughter that we travel together to Ukraine, she happily agreed. And so, two years ago we took part in the school for the first time, motivated by Ukrainian roots and a love for Ukrainian song.

Tell us about your first experience participating in the School of Ukrainian Language and Culture.

My first time in Ukraine was in 1989, that is, Soviet times. My aunt and I went to visit relatives. Of course, what I saw then and what I see today are very different Ukraines. When I took a taxi from the airport to the UCU campus, I immediately felt the positive energy here. My daughter and I weren’t sure what to expect from the program, and Ukraine in general, because we had traveled little before that. And we were very surprised with how contemporary the university turned out to be. Even the dormitory was excellent, comfortable, with large, beautiful rooms.

The participants, with whom we got acquainted the next day, were from various different countries and intellectual backgrounds. Some also had Ukrainian roots. I had friendly relations with many and still keep in contact and correspond. UCU invites all who want to study the Ukrainian language. Among them are people like Kate Davenport, a British diplomat who works in Kyiv. We met two years ago and last summer visited her in the capital. Kate learned the language beautifully but is sad that in Kyiv Russian is heard more often.

Tell us about your studies at the school.

When I came to the school, I had basic knowledge. My professor, Mariana [the school’s academic director] went to the University of Michigan on the Fulbright program. With her I studied vocabulary and grammar, which was very helpful in improving my language level. Every day the other students and I spoke only in Ukrainian. Every evening we did our homework, which was not difficult and required about an hour of our time. In addition, there were many excursions.

At the first school there were more participants of my age, with whom I spent time. Together we visited Lviv cultural and recreational institutions. Last year, the program had 45 students, mostly young people, so my daughter was better able to spend time with her peers. All that was left for me was grammar. I feel that I still don’t speak well enough. I want some language immersion. BUR [Building Ukrainian Together] was an option for us: after summer school, my daughter and I traveled to Chernivtsi.

What during the school was most helpful to you in studying the language?

We had many exercises during lessons, in particular games that turned out to be very effective. It was difficult for me to study Ukrainian grammar and, inasmuch as I think analytically, I also often thought long about cases or correct pronunciation. Younger students didn’t have these problems. I am most grateful to Ihor, my tutor, who also shared techniques for language learning. All the professors were very experienced and have much patience, which is very important.

Two years ago I met a student from Oxford, Ainslie Katz, a very bright girl. At the end of her studies, she had raised her level to advanced. At the final presentation, Ainslie shared her methods for learning Ukrainian; in particular, she explained how modern music helped her. She got me very interested. I also started reading “Harry Potter” in Ukrainian, which I’m still doing; I’m now on the third book, which I read with a translation app, which really helps in learning words. It’s interesting to me that language has various areas: I practice my reading skills and I’m gradually starting to read faster, but this is not always enough, because I should regularly practice conversational language.

How did Lviv help you learn the language?

In my opinion, any city in western Ukraine will help you study Ukrainian. But this will be more difficult in central or eastern areas. Lviv, of course, is attractive, close to Europe and it’s easy to get around.

How will you continue to improve your Ukrainian?

At home, I continue to work with the “Yabluko” textbook. I read texts, do exercises and carry a dictionary. I also use mobile apps; in particular, I recently downloaded LingQ, which helps with listening exercises. The speaker in the program has a good western Ukrainian accent, which is very helpful.

What impressions did your daughter have of the school?

She really liked studying and acquiring knowledge. She was sad when she returned home and had no opportunity to practice the language. In the U.S.A., she is additionally studying Spanish, but very much wants to continue Ukrainian. She is now in her last year at school and would like to enter a university which offers courses in Ukrainian.

Would you recommend this school to others?

The UCU School of Ukrainian Language and Culture has a unique spirit which, in my opinion, can be applied to many various things. I recently met colleagues from America who opened an office in Zaporizhia. My colleague is married to a Ukrainian woman. Ten years ago they moved to San Francisco, but he doesn’t speak Ukrainian. I told a friend of his about UCU and he was very interested in the school, and in the university in general. I already recommend UCU to all my Ukrainian friends in America who have children – perhaps they’ll come here to study.

What is your connection with Ukraine today?

I have a software firm in California. A year and a half ago, I decided to open an office in Ukraine, and last year I encountered a startup-company in Ternopil, got acquainted with their specialists, got advice from them and, finally, started a business in Lviv. We now have a small office here, with four workers, and I travel here a few times a year. I like Lviv very much – it’s a great city!

Each year an average of 50 people from the United States take part in the UCU School of Ukrainian Language and Culture [https://studyukrainian.org.ua/]. Among them are those who take summer, spring and fall programs, and individual lessons and online courses. A unique characteristic of the summer program is a visit to the Carpathians that allows students to immerse themselves in the daily lives of residents of small cities and villages, to interact with local people and in this way find out more about the life of Ukrainians in a mountainous area. In 2019 the school’s program had 153 participants from various countries, about 65 percent were diaspora Ukrainians. Every year the number of those interested in studying Ukrainian language and culture increases.