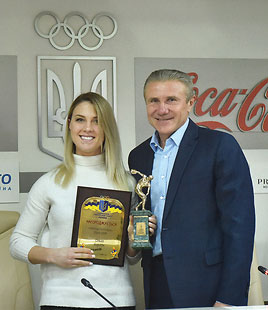 Olha Kharlan receives the award for “Best Athlete of the Month” for March 2020 from Serhiy Bubka, president of the National Olympic Committee of Ukraine.

Personal philosophies, words of wisdom, deep reflections and opinions matter, especially when they emanate from an established competitive spirit who has repeatedly proven herself on the international stage. Young and old can always benefit from an injection of a winning formula when espoused by someone with character, passion and a superior work ethic, in many ways a role model.

In this case, such a role model is 29-year-old fencing champion Olha Kharlan. Since graduating from cadets in 2005, Kharlan has won 43 total medals in individual and team saber competitions, including 18 gold medals. Her first success was the national Junior title, won at age 13 against teenagers up to five years older. She captured four consecutive European championships (2011-2014), won the world title for the fourth time in 2019 and would have been a favorite in the postponed 2020 Summer Olympic Games.

Below are more thoughts, insights and opinions collected from various interviews, press releases and appeals voiced by Kharlan.

Childhood beliefs
Hers was a restless childhood, filled with scraped knees, playing with boys, celebrating holidays at her grandmother’s house. She learned to defend herself at a very young age and needed to be closely watched for fear of running off. Her uncle spoiled her with Tic Tac mints and she loved sandwiches with ketchup spread on bread. One early career ambition was to work in a grocery store as a cashier/clerk. As an adult, she occasionally desires to be a child again – to fool around and do nothing. For three years she studied ballroom dancing, but in time the lessons got too expensive. She laughs at how fencing is depicted in the cinema – musketeer d’Artagnan would never have won a match with a true professional. She equates a person’s inner strength with a strong upbringing, citing herself as an example, claiming her mother as the role model she followed. Kharlan likes to chat it up at competitions, believing peace and quiet can toy with your mindset and preparation. People should always be treated with respect and kindness – no ego trips or star power toward friends or fans. Popularity is acceptable in the sports world, but not allowed in one’s personal life. Her family and countrymen who cheer for her and rejoice in her victories motivate her drive for continued success in her sport.

The sport of fencing
Her godfather introduced Kharlan to fencing and went on to be her first coach. Anatoliy Shlikar suggested the sport to her mother, who agreed, and the youngster learned the basics, settling on the saber as weapon of choice a year into training. For some two years at the beginning, she used collective equipment, not being able to afford her own shoes, saber, mask or breastplate. Overall it took three years until she began making progress, finally liking and understanding the sport. At this point she preferred fencing with young men because they were faster and stronger, reasoning it would hasten her development. When she started beating boys in competitions it made it all worthwhile – at age 14 she earned her first monetary reward and decided this would be her career.

Rules and success
Kharlan’s main rules in fencing are to not overthink, ignore excessive pressure/stress and try really hard to enjoy the fencing experience. Saber is a most unpredictable discipline in the sport, where everything depends on one moment. Winning a match – capturing a medal in an international competition is a feeling which cannot be described by words – it has to be experienced. Every medal is valuable, even if it is not gold. Much blood, sweat, nerves, tears and strength were sacrificed in the effort to win it. Good sportsmanship is mandatory and stalling for time, cursing and arguing with the judges make for a dishonest battle. Despite her phenomenal track record and favorite status, Kharlan still gets nervous prior to every competition. A positive state of mind is an essential component of her success – going out on the track with the thought of a possible defeat can never happen. In life and in sports, an opponent cannot ever be underestimated. An opponent should always be respected. Fencing is a creative sport which is almost impossible to fully master technically. Her sports idols include Serhiy Bubka, Usain Bolt and Michael Phelps. The ultimate goal is to win individual gold at the Summer Olympics. Kharlan says if she had won gold in Rio she would have retired from the sport. All of her medals are dedicated to her family and her country – the people who care for her, worry about her and those who protect her and her homeland. If not for them, she could not represent Ukraine and have a home to return to after competitions.

Sports and politics
To be a competitive nation in sports, a government must invest in the recruitment, training and development of athletes. Gyms and training facilities come first. If those running the government have no love for sports, sports will not prosper, athletes who want to work and win medals will not succeed. It is pointless to compare sports abroad with what exists in Ukraine. Kharlan is still amazed some people in Ukraine are not familiar with the sport of fencing. She has repeatedly received offers to compete for other countries because of non-promising conditions in Ukraine, but has always declined all offers, hoping the situation in her native land is fixed. She refers to the annexation of Crimea as an inadmissible thing and the territory needs to be returned to Ukraine. She would not consider visiting Crimea because it is an occupied territory and thus not currently a part of her country. She finds it very motivating and touching to hear the Ukrainian defenders stationed in eastern Ukraine follow sports and root for Ukrainian athletes. At competitions, Ukrainian athletes do not converse about politics with their Russian counterparts – both parties understand the topic is painfully difficult and comprehend the reality between the neighboring nations. Kharlan believes the Ukrainian national anthem should be heard more frequently and the Ukrainian flag should be hoisted higher. In today’s times, Ukraine lacks success stories, but there is much hope Ukraine will prevail as evidenced by its athletes in all competitions throughout the globe. Ukrainian sportsmen are doing their part through their efforts, results and medals to support the military and spur them on to victory. Kharlan and all of her athlete peers are fighting in their world – the sports world.