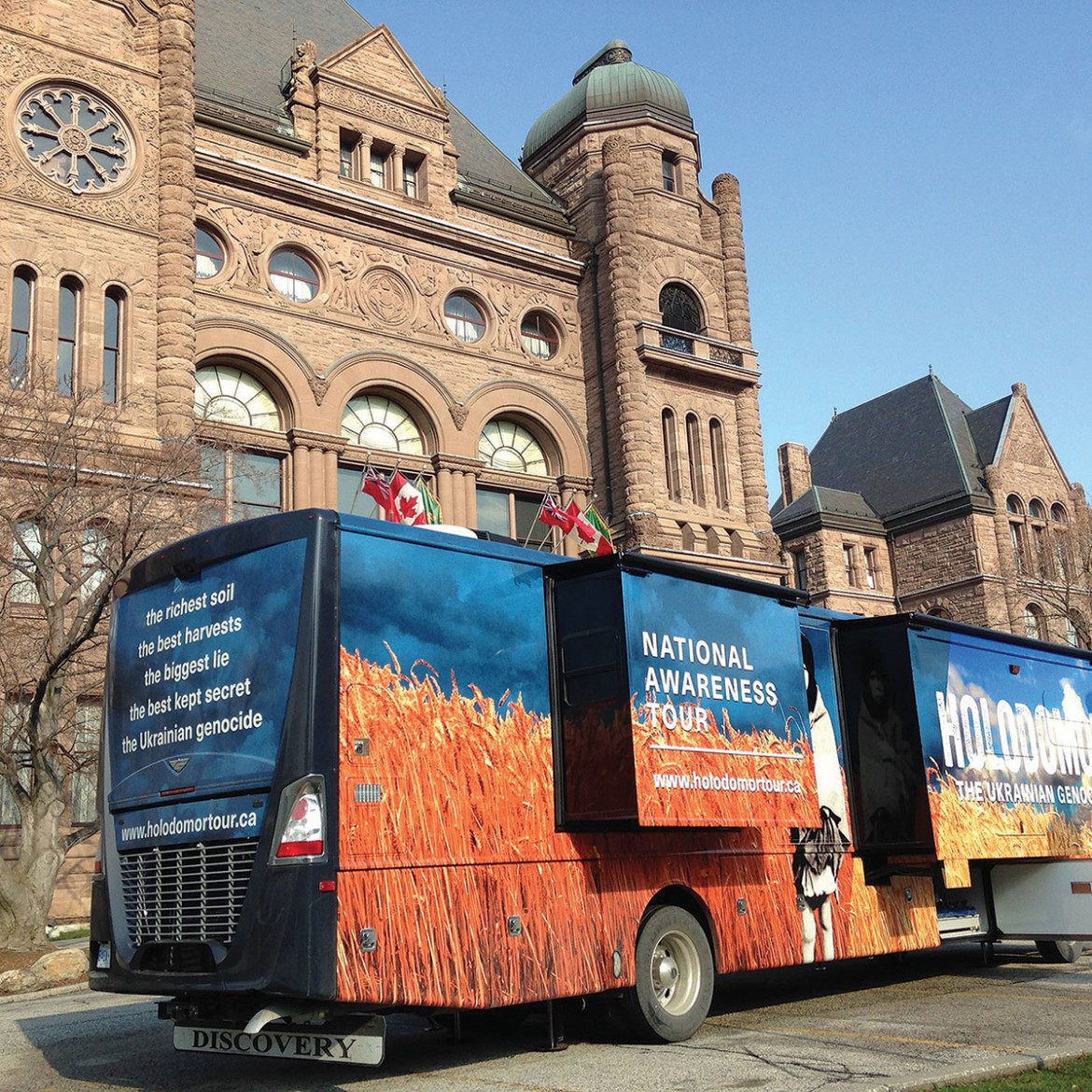 The Holodomor Mobile Classroom was launched at the Ontario Legislative Assembly at Queen’s Park.

TORONTO – The Holodomor Mobile Classroom, a new initiative for teaching about the Famine of 1932-1933, was the focus of a commemoration at the Ontario Legislative Assembly at Queen’s Park on November 24. The customized RV, with the words “Holodomor – The Ukrainian Genocide” emblazoned across 40 feet of blue sky and wheat fields, was a striking sight against the background of the legislative building.

The Holodomor Mobile Classroom will tour the province of Ontario and then the country, teaching about the man-made famine that starved to death millions of Ukrainians.

Ontario Minister of Education Liz Sandals and Member of the Provincial Parliament Yvan Baker, who has supported the project since its inception, cut the ribbon to launch the mobile classroom, which is the centerpiece of the Holodomor National Awareness Tour project.

Bohdan Onyschuk of the Canada-Ukraine Foundation, which spearheaded the project, said, “We are excited that the Holodomor Mobile Classroom is ready to begin visiting schools, community events and other venues, where it will promote awareness of the Holodomor and the consequences of hate, oppression and discrimination.”

Also in attendance were Taras Bahriy, president of the UCC Toronto branch; Julie Dzerowicz, member of Parliament (Davenport); and two Canadians who lived through the Holodomor, Stefan Horlatch and Mykola Latyshko. The ceremony included a blessing of the bus by Bishop Andriy of the Ukrainian Orthodox Church of Canada and Bishop Stephen Chmilar and the Rev. Petro Dvirnik of the Ukrainian Catholic Church.

Minister Sandals stated, “The Holodomor Mobile Classroom will provide students with an innovative learning experience about social justice, human rights and democratic values in relation to the genocide by famine which killed millions of Ukrainians. This supports the goals of our Equity and Inclusive Education Strategy, which encourages students to learn about diverse histories, perspectives, and cultures.”

The Province of Ontario has committed $750,000 to raise awareness of the Holodomor among students in public schools. Students in urban, rural and northern communities will benefit from the state-of-the-art audio-visual experience featuring a 28-foot video wall. A facilitator will lead an interactive lesson that develops critical thinking skills as students practice the historian’s craft, investigating sources and analyzing artifacts. Lessons underscore the importance of human rights and the rule of law, as well as the concept of genocide.

More than 10,000 students per year across Canada are expected to benefit. Wheelchair accessible, the mobile classroom can accommodate up to 34 visitors at a time.

The government of Canada has provided a three-year grant of $1.5 million to support the project. The Province of Manitoba is providing educational expertise and other in-kind support. The project is carried out by the Canada-Ukraine Foundation (project lead), the Ukrainian Canadian Congress (UCC), the Ukrainian Canadian Research and Documentation Center (UCRDC), and the Holodomor Research and Education Consortium (HREC) of the Canadian Institute of Ukrainian Studies, University of Alberta.

The Holodomor Mobile Classroom will visit universities, government buildings, fairs and community events, as well as schools. To arrange a visit of the mobile classroom, readers may contact the Holodomor National Awareness Tour at 416-966-9800 or via the project website, www.holodomortour.ca.