Dear Readers! Welcome to The Washington Notebook, a column compiled by the Ukrainian National Information Service (UNIS) to provide perspective and insight on activities in Washington that concern the Ukrainian community. 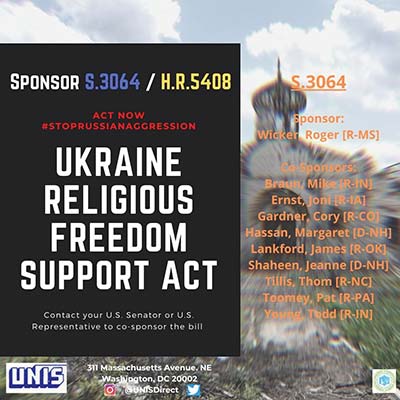 Graphic by UNIS to encourage community members to contact their legislators and urge them to support the Ukraine Religious Freedom Support Act.

What did the November 3 elections prove in the United States? Firstly, an unprecedented number of citizens went to the polls to cast their vote for our elected officials. But more importantly for the Ukrainian community, many of our “Friends of Ukraine” in Congress have been re-elected, while those newly-elected to Congress have had opportunities to interact with community representatives during the campaign period.

It is significant to note that support for Ukraine in Congress largely lies with the outreach and advocacy of the Ukrainian community. And for that reason, there remain many opportunities in the remaining days/weeks of the 116th Congress, as well as in the new 117th Congress, to continue expressing our concerns about mutual areas of interest for enhancing the U.S.-Ukraine strategic partnership.

Recent congressional actions since the elections included passage in the House of Representatives of the Ukraine Religious Freedom Support Act (HR 5408), which “opposes violations of religious freedom in Ukraine by Russia and armed groups commanded by Russia.” A companion bill also has been introduced in the U.S. Senate and currently has 10 sponsors. Community members are urged to contact their senators to support S 3064 and bring it to a vote before the Senate session concludes by the end of the year.

Additional measures, which might not expressly deal with Ukraine, have implications in the Central and East European region. Most notably, passage in the U.S. House of Representatives of the Three Seas Initiative (3SI) resolution encourages European Union countries in Central and East Europe to promote a vision “of enhanced regional infrastructural connectivity to non-European Union member states in the Three Seas region, including Ukraine, Moldova and those in the Western Balkans.” The crackdown on pro-democracy protesters in Belarus has also fostered passage of HR 8438, the Belarus Democracy, Human Rights and Sovereignty Act of 2020, which enables the president “to impose sanctions related to Belarus to include activities surrounding the disputed 2020 Belarusian presidential election and subsequent government crackdown.”

Sanctions are a pinnacle of the community’s advocacy to stop all forms of Russian aggression in the region – from the invasion of Ukraine, cyberwarfare on American allies and the Belarus dictatorship to the Nord Stream 2 pipeline. Each configuration of Russian aggression holds significance for greater opportunities to foster new sanctions measures to curtail and hamper, if not diminish, Russian interference. While it is projected that enhanced sanctions against the building of the Nord Stream 2 pipeline will be included in the National Defense Authorization Act of FY2021, other Russian-sanctions bills such as the Defending American Security from Kremlin Aggression Act (DASKAA) will most likely need to be re-introduced in the new congressional session beginning in January 2021.

But sanctions alone are not a guarantee for the security, sovereignty, and territorial integrity of Ukraine from continued acts of Russian aggression. Ukraine was fortunate to achieve an Enhanced Opportunity Partnership (EOP) with NATO earlier this year, which has heightened awareness for the next step in Ukraine’s growing interaction with NATO – the introduction of a Membership Action Plan (MAP). The 2008 NATO Summit in Bucharest clearly stated that Ukraine and Georgia would become members of the alliance in the future. It behooves Ukrainian community members to interact with their members of Congress and relate the importance of Ukraine’s closer relationship with the trans-Atlantic alliance.

Thus, these and other actions signify an abundance of opportunities for the Ukrainian community to continue its advocacy of Ukraine-related concerns. As the Congress begins its new session in January 2021, contact your elected officials, promote their membership in the Ukraine caucuses in the House and Senate, and encourage others to become involved.

Don’t let the pandemic slow down our advocacy. The Ukrainian National Information Service (UNIS) will initiate a series of virtual dialogues with congressional offices to discuss matters of U.S.-Ukraine relations. Won’t you join the effort?