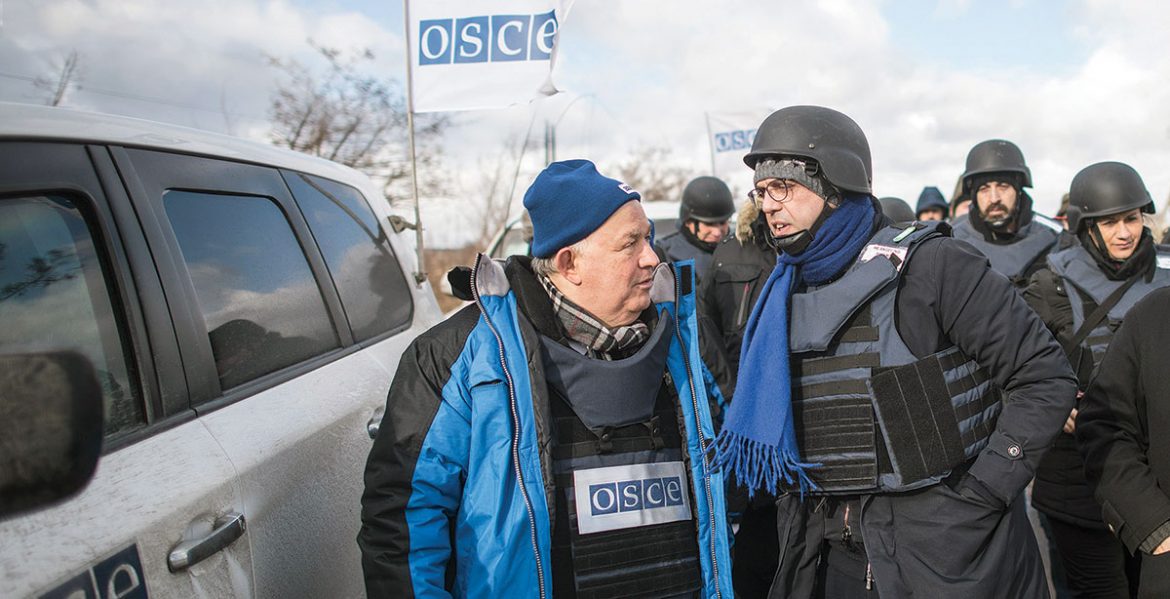 OSCE Chairperson-in-Office Angelino Alfano (right) is accompanied by Ambassador Ertugrul Apakan, chief monitor of the OSCE’s Special Monitoring Mission in Ukraine, to an entry-exit checkpoint near government-controlled Pyshchevyk, where they saw first-hand the situation on the ground along the contact line in eastern Ukraine on January 31 of this year.

KYIV – The mandate of the 57-state international body charged with monitoring a truce in the Donbas war may have been further compromised after allegations emerged that sensitive information about the Ukraine mission was passed to Russian intelligence.

Hundreds of internal documents of the Special Monitoring Mission (SMM) of the Organization for Security and Cooperation in Europe (OSCE) dating to autumn 2016 were handed over to Russia’s Federal Security Service, according to a July 16 report aired by German channel ARD.

The television outlet said it obtained nearly 400 pages of the data. They include observation camera locations, pictures of military bases, internal correspondence, addresses of monitors, their personal habits and even blood types.

The OSCE’s Ukraine mission hasn’t confirmed the alleged data breach, saying that it “cannot comment or speculate on documents of unknown origin” and without “proper verification.”

The international body added that it is “concerned that alleged breaches may carry a potential risk for its staff, compromising their privacy and security.”

The “OSCE suspects” an official working at the “Russian Embassy in Ukraine who is seconded to the OSCE mission for several months,” The Daily Beast reported on July 22, citing a former European diplomat.

All Russian members of the OSCE SMM in Ukraine work for their country’s intelligence agencies, Ukrainian Foreign Affairs Minister Pavlo Klimkin alleged after the German report was aired at a news conference in Berlin.

Iryna Herashchenko, deputy chair of the Verkhovna Rada and a member of the Trilateral Contact Group that aims to find a diplomatic resolution to the Donbas war, called on the OSCE to investigate the potential data breach.

“We also appealed to the OSCE and its representatives with a request that Vienna [where the OSCE is headquartered] conduct a thorough investigation into information about the possible theft of personal data of OSCE SMM observers,” she said on Facebook. “Ukraine strongly objects to the fact that the Russians who are present on the mission are engaged in espionage rather than the clearly defined mandate for observers.”

As evidence has mounted over the years that the Donbas war is a covert Russian invasion of Ukraine that started with Crimea in late February 2014 and spread to the two easternmost regions of Luhansk and Donetsk, the inclusion of Russian observers in the OSCE mission has been questioned.

Russia has the fourth largest contingent in the monitoring mission with 37 members, accounting for 5 percent of mission monitors.

When The Ukrainian Weekly asked the OSCE in 2017 why, as an aggressor, Russia still has monitors in the field, the security body said that it has a “number of mechanisms in place to ensure the impartiality of the information we provide” and that its conduct code “requires all OSCE officials to conduct themselves at the highest personal and professional level at all times.”

Following the purported data breach, the Atlantic Council, a Washington-based policy center, published an opinion piece that called for expelling Russian monitors from the OSCE’s Ukraine mission in a July 23 blog written by Paul Niland, a British entrepreneur and publisher and longtime resident of Kyiv.

“Russia is without doubt a party to the conflict in Ukraine, and without doubt so, too, is Ukraine,” he wrote. “For this reason, there aren’t any Ukrainian monitors… Ukrainian citizens are employed by the OSCE in Ukraine in a variety of administrative roles… therefore there should be no Russian monitors.”

One former international staffer at the OSCE mission in Ukraine told The Ukrainian Weekly that the image of the security body has diminished.

“I will also say as a former OSCE staffer that, given this last piece by Paul [Niland], I believe the tide in public opinion has turned severely against the OSCE in Ukraine,” said the former OSCE staffer who asked for anonymity because the situation “is too sensitive and it’s too easy to identify [me].”

The individual added that “it can only be downhill from here and perhaps another solution needs to be found.”

Disgrace also followed the OSCE three years ago when a Russian monitor told a Ukrainian camera crew in Luhansk Oblast that he had worked for Russian intelligence. The Russian, Maksim Udovichenko, was expelled from the SMM after the video was aired.

In another incident, published in November 2017 on YouTube by the self-proclaimed militia in “separatist”-controlled Luhansk Oblast, a Russian OSCE monitor is seen chummily greeting and shaking hands with a member of the occupying force. After being shown three corpses of Ukrainian soldiers that were being handed over, the OSCE monitor salutes the militant.

The OSCE has from the outset of its SMM in Ukraine in March 2014 also faced restrictions of movement in the war zone due to security hazards and threats, including those posed by mines and unexploded ordnance, as well as other impediments.

Its drones are often targeted and one of its monitors, an American, died last year in a landmine blast. Joseph Stone, a paramedic by training, in April 2017 was traveling in a car in Russia-occupied Luhansk Oblast when the vehicle hit a mine. Two other monitors were wounded in the incident.

The former OSCE staff member with whom The Ukrainian Weekly spoke said that it’s quite possible that squabbles occur in the field – before anything is included in a report, all patrol members must agree on the information.

“OK, I will say (as a former OSCE staffer) that I witnessed no such bickering. But that doesn’t rule out that happening in the field,” the individual said.

Mykhailo Samus, deputy director for international affairs at the Ukrainian Center for Army, Conversion and Disarmament Studies, said he believes that Russia’s presence in the OSCE Ukraine mission compromises its mandate to monitor the non-existent ceasefire.

“Despite the fact that throughout the whole period of waging aggression and committing a whole range of crimes both against Ukraine and other countries [downing of MH17, poisoning in Salisbury, U.S. election meddling], Russia is a full member of the OSCE and therefore it has the full right for her interests to be taken into account as well,” he said

Mr. Samus concluded: “Therefore, I doubt that the OSCE will respond differently than before. Of course, there will be an investigation, but I can’t say for sure that some credible truth will be established.”