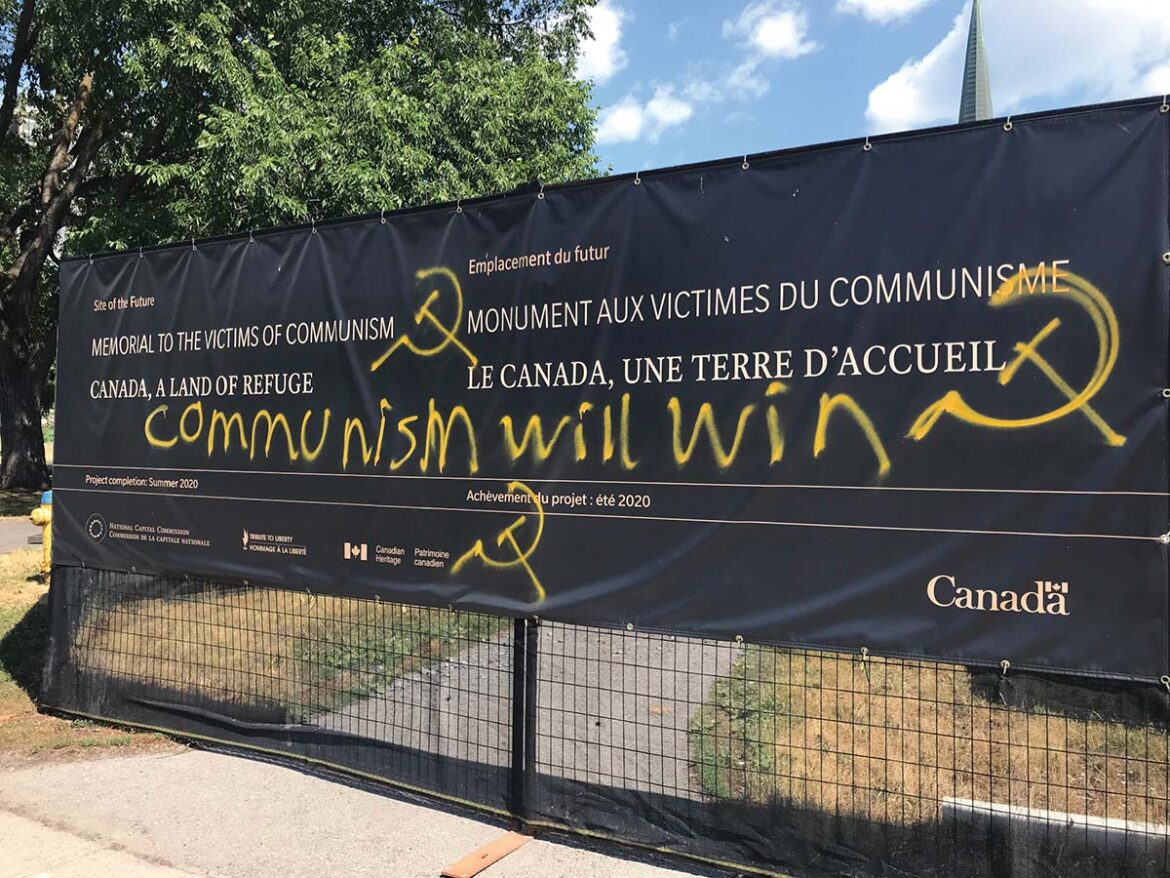 The vandalized banner at the construction site of the Memorial to the Victims of Communism in Ottawa.

OTTAWA – A large banner at the construction site of the “Memorial to the Victims of Communism – Canada, a Land of Refuge” has been vandalized. The words “Communism will win” and Soviet hammer-and-sickle emblems were spray painted on the bilingual (English-French) banner.

The $3 million memorial dedicated to those who suffered under Communist regimes is slated to be completed this year.

“The Memorial to the Victims of Communism is to be a national place of mourning, reflection, contemplation and remembrance, honoring the millions of innocent victims murdered by Communist regimes throughout the world,” the Ukrainian Canadian Congress (UCC) noted in a statement released on July 6. “Millions of people, including many Ukrainians, who were subjected to the brutality and inhumanity of Communism, fled to Canada – where they found liberty and peace. That this sight was desecrated through this act of hate is unacceptable and deplorable, and an insult to the hallowed memory of the millions of innocent victims of Communism.”

The Ukrainian Canadian Congress added: “This is a reminder to us all of the need for further education and awareness in our own society about the evil and crimes of Communism.”

Tribute to Liberty, the non-profit organization whose mission it is to build the memorial in Canada’s capital, tweeted its reaction: “Communism always fails. Communism kills but also gives birth to plentiful number of the useful idiots in Canada and beyond. The Memorial isn’t completed yet but that didn’t stop some moron from insulting the memory of our heroes on Canada Day” [July 1].

Member of Parliament Andrew Scheer, leader of Canada’s Conservative Party and of the Official Opposition, reacted with this tweet: “Millions of Canadians know firsthand about Communist atrocities, having fled its brutality & oppression to find refuge in Canada. Communism has taken the lives of over 100 million around the world. We must always remember its victims. Ignorant vandalism like this is unacceptable.”

The vandalized signage has been removed and the UCC National Office said it has contacted Ottawa Police Services about the incident. The UCC said it will update the Ukrainian Canadian community and the public when more information is available.

In related news, the Victims of Communism Memorial in Washington was vandalized on June 1. The monument of the “Goddess of Democracy,” which is modeled on the statue erected in Tiananmen Square, was defaced with graffiti that included the letters “BLM,” an apparent reference to Black Lives Matter. The base of the monument was spray painted with the letters “CHAN.”

Marion Smith, executive director of the Victims of Communism Memorial Foundation, posted on Twitter on June 2: “You do not advance justice by defacing our country’s memorial dedicated to one of the largest victim groups in human history – those killed by communist parties in power.”

On Facebook, the VOC Memorial Foundation posted: “The culprits are not yet known. The site has been targeted by socialist extremist and Antifa groups in the past.” VOC is an educational, research and human rights nonprofit devoted to commemorating those who have suffered under Communist regimes.

The VOC memorial, which was erected in 2007, was among several monuments in Washington that were defaced or damaged during what began as peaceful demonstrations to protest the killing of George Floyd, a Black man who died in police custody in Minneapolis.