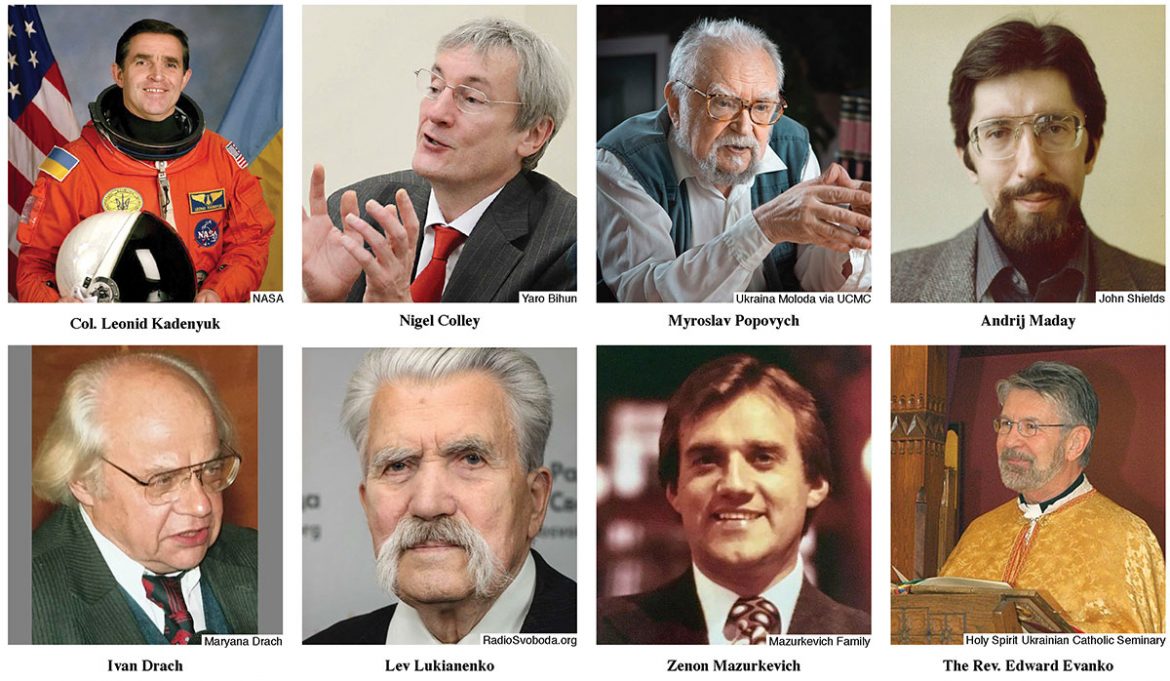 During 2018 our community mourned the passing of many of its prominent members: artists, church leaders, soldiers and community activists. Among them were the following, listed in order of their passing.

Leonid Kadenyuk, 67, Kyiv; independent Ukraine’s first man in space; born in the village of Klishkivtsi in the Khotyn district of Chernivtsi, Kadenyuk was a test pilot and cosmonaut in the Soviet era; appointed to command the Ukrainian space crew following the 1990 Ukrainian-USSR State Agreement on a Collaborative Space Program; one of the first members of the astronaut group of the National Space Agency of Ukraine; served as a payload specialist on the U.S. space shuttle Columbia on a November/December 1997 mission, bringing with him a Ukrainian flag, a portrait of Taras Shevchenko, a copy of the “Kobzar” and a recording of Ukraine’s national anthem, spending 15 days in space (252 Earth orbits, traveling 6.5 million miles) and conducting a series of science experiments studying the effects of microgravity on plant growth; won a seat in the Verkhovna Rada in 2002 and served as a national deputy until 2006 – January 31, 2018.

Nigel Colley, 57, Nottinghamshire, England; independent researcher and grandnephew of Gareth Jones, the Welsh journalist who was first to report on the Great Famine of 1931-1933 in Ukraine; along with his mother, Dr. Margaret Siriol Colley, worked to bring the life and accomplishments of Jones to public knowledge; was a researcher for Ray Gamache’s book, “Gareth Jones: Eyewitness to the Holodomor”; spoke at various academic conferences and universities in Europe and North America, as well as the United Nations; was a featured speaker at Ukrainian community events; in the words of Michael Sawkiw Jr., chairman of the U.S. Committee for Ukrainian Holodomor-Genocide Awareness, “His goal was to bring the truth about the Holodomor, and those who wrote about the genocide in the 1930s, to the attention of the world. Nigel will always be remembered for spreading awareness of the Holodomor and the works of his [great] uncle, Gareth Jones” – February 1.

Myroslav Popovich, 87, Kyiv; academician, director of the Ukrainian State Institute of Philosophy at the National Academy of Sciences, author, great thinker; born in Zhytomyr, studied philosophy at Kyiv University, worked as a village school teacher and school director, earned his Ph.D. at the Institute of Philosophy in 1959, and worked there until his death; author of about 400 scholarly works; his most well-known research works are “Hryhoriy Skovoroda” (1984), “The Mindset of Ancient Slavs” (1985), “Mykola Hohol” (1989), “Ukraine and Europe: Right and Left” (1996), “Essays on the History of Ukrainian Culture” (1998), “The Red Century” (2005) and “Being a Human” (2011); was frequently seen on the Maidan during the Orange Revolution of 2004 and the Revolution of Dignity of 2013-2014; awarded the Medal of Freedom posthumously by President Petro Poroshenko on February 14 “for personal accomplishments in establishing the sovereignty and independence of Ukraine, consolidation of Ukrainian society and development of democracy, for a long and productive academic, social and political activity” – February 10.

Fedir Petryk, 94, Easton, Pa.; born in the village of Stare in Boryspil District, he was part of the post-World War II immigration to the United States, settling in Levittown, Pa.; active in his local Ukrainian community; helped to organize the purchase of a Ukrainian Center in Bristol, Pa.; active member of the Ukrainian National Association, delegate to many of its conventions and secretary of Branch 362 for 55 years – March 4.

Andrij Maday, 64, Parma, Ohio; artist known for his woodcuts, paintings, drawings, icons and giclées; native of Philadelphia and a 1975 graduate of The Pennsylvania Academy of the Fine Arts; received more than a dozen awards for woodcuts and drawings, including a Louis Comfort Tiffany Foundation Grant; lectured extensively on iconography and the art of the woodcut in the U.S. and Canada; had 36 solo exhibitions in the U.S. and Canada and participated in over 85 group shows; executed five full-color book covers for the Paulist Press Classics series; two of his woodcuts were used as logos by The Pennsylvania Academy of the Fine Arts – March 18.

Yuriy Soloshenko, 75, Ukraine; former electronics plant chief who was arrested by Russian authorities in Moscow in August 2014 and accused of trying to buy restricted components for the S-300 air-defense missile system; sentenced to six years in prison in October 2015; released in 2016 along with Crimean photographer Hennadiy Afanasyev for two people – also Ukrainians – who were in Ukrainian custody on charges related to their alleged support for Russia-backed “separatists,” in a move seen as an attempt by Moscow to erode support in the West for the continuation of sanctions imposed on Russia in response to its takeover of Crimea and its support for the separatists in the war in eastern Ukraine – April 4.

Ivan Drach, 81, Kyiv; noted writer who was at the forefront of the Ukrainian literary revival initiated by the Shestydesiatnyky; born in Telizhentsi, Kyiv region; made his literary debut in 1961; member of the Writers’ Union of Ukraine; known as a scriptwriter, playwright and literary critic; worked on the editorial staffs of Literaturna Ukraina and Vitchyzna, and at Dovzhenko Studios; his literary works were popular both in Ukraine and abroad and were translated into many languages; also known for his activity in the Ukrainian dissident movement of the 1960s-1990s; instrumental in forging the coalition that created the National Movement of Ukraine (Rukh) and was elected its first chairman in September 1989; served as co-chairman of Rukh with Vyacheslav Chornovil and Mykhailo Horyn from February 28 to December 4, 1992; elected as a national deputy in 1990 and again in 1998 and 2002; became the head of the Ukrainian World Coordinating Council at its founding convention in 1992; recognized in 2006 as a Hero of Ukraine for his “selfless service to the Ukrainian people, which he performed through poetry, standing for the ideas of freedom and democracy” – June 19.

Lev Lukianenko, 89, Kyiv; Ukrainian dissident who spent 27 years in Soviet prisons, labor camps and exile; originally sentenced to death – later commuted to 15 years in prison – for “anti-Soviet propaganda” in 1961 for his advocacy of Ukraine’s secession from the USSR; co-founder of the Ukrainian Helsinki Group in 1976; in 1977 sentenced to 10 years in prison and five in exile for “anti-Soviet agitation and propaganda”; released in 1988, one of the last Soviet political prisoners freed during Mikhail Gorbachev’s period of perestroika; active in the Ukrainian Helsinki Union; became the head of the Ukrainian Republican Party and was elected to the Verkhovna Rada in 1990 and for three more terms thereafter; helped write the Act of Declaration of the Independence of Ukraine; served as independent Ukraine’s first ambassador to Canada in 1992-1993; received the Hero of Ukraine award in 2005 and the Taras Shevchenko National Prize in 2016 – July 7.

Stefan Horlatsch, 97, Ottawa; prominent Ukrainian Canadian community leader, Holodomor survivor and educator; born in Zaporizhia, survived the Holodomor as a child and frequently spoke publicly about his experiences and the importance of ensuring that such events are never repeated; a teacher by profession, was one of the founders of the Ukrainian Youth Association in Canada; former president of the Canadian Friends of Ukraine; author of seven books; carried the International Holodomor Remembrance Flame across Canada on the 75th anniversary of the Holodomor, visiting 17 cities and countless schools, educating many about this tragic yet important part of world history – July 14.

Mary Elyse Pressey, 94, New York; born in Manitoba, worked and lived in several places throughout the U.S. and Canada, finally settling in New York, where she retired from the Kaye Scholer in 1993; wrote many articles over the years for various publications in both Ukrainian and English; served on the Board of Directors of the Ukrainian Institute of America and was deeply involved in its social and organizational areas, contributing many years of volunteer labor as secretary, social coordinator and decorator for many events held there – September 10.

Bohdan Rubchak, 83, New Jersey; noted poet and literary critic, professor of comparative literature and one of the founders of the New York Group of Poets; born in Kalush in 1935 and arrived in the U.S. in 1948; earned a Ph.D. in comparative literature from Rutgers University in 1977; taught at the University of Illinois in 1974-2005; published more than 100 scholarly articles and six collections of poetry; won two Ivan Franko literary awards (U.S) for his poetry and essays, and the Pavlo Tychyna Poetry Prize (Ukraine) in 1993; regarded as one of the finest poets of the Ukrainian diaspora and is considered to have been one of the leading scholars of modern Western European and Ukrainian poetry – September 23.

Jaroslawa Rubel, 94, New York; a member of the post-World War II immigration, who settled in New York; educator and organizer of educational camps for youth in the U.S. and England; member of the Pershi Stezhi sorority of Plast Ukrainian Scouting Organization; headed the World Plast Executive (Bulava) of Plast in 2000-2006; held various leadership positions in Plast USA; was awarded the Order of St. George in gold – Plast’s highest honor – as well as other Plast awards; member of the World Congress of Free Ukrainians Secretariat as a representative of Plast; leading activist in World Conference of Ukrainian Youth Organizations created within the WCFU; honored member of the Ukrainian National Women’s League of America; member of the New York Friends of UCU Committee and a great benefactor of the Ukrainian Catholic University – October 19.

Zenon Mazurkevich, 79, Philadelphia; born in Roznitiv, Ukraine, in 1939, emigrated to Germany and then Canada; having earned a bachelor’s degree in architecture from the University of Toronto in 1965, moved to Chicago to work for modernist architect Ludwig Mies van der Rohe; earned master’s degrees from the University of Pennsylvania in architecture and city planning; opened his own architectural firm in Philadelphia in 1973; religious architecture was his enduring creative passion, and his works include St. Joseph the Betrothed Ukrainian Catholic Church in Chicago, which Architectural Digest called a “Chicago landmark in its own right,” St. Michael the Archangel Ukrainian Catholic Church in Baltimore, the Basilian Monastery in Glen Cove, N.Y., and the Prayer Room at St. Basil Academy in Fox Chase, Pa. – October 26.

Ed Evanko, 80, Winnipeg; trained at England’s renowned Bristol Old Vic theater school in the early 1960s, he went on to appear in over 200 musicals in Canada, Japan and the United States, most notable on Broadway in “The Music Man,” “A Little Night Music” and his debut in 1969, “The Canterbury Tales,” which earned him a Theater World Award; belonged to Benjamin Britten’s English Opera Company and the Welsh National Opera in the United Kingdom; hosted his own national weekly TV series in Canada in 1967, “The Ed Evanko Show”; recorded several Broadway cast albums, a pop album and two albums of Ukrainian songs; performed in several popular television series and movies; entered seminary late in life, in his 60s, and was ordained a Ukrainian Catholic priest in 2005; wrote and performed several one-man plays, most notably “Holodomor,” which he presented around the world, including in Ukraine, while serving as pastor of parishes in Manitoba and British Columbia – November 18.

Zenowij Onyshkewych, 89, Ridgefield, Conn.; prolific artist who worked in a wide range of media; born in Lviv, transported to a German work camp in Vienna in 1944, then a displaced persons camp in Munich in 1946; emigrated to the United States in 1949, settling in Queens, N.Y.; was adjunct professor of drawing and painting at Fairfield University for 24 years; his work is found among prestigious American and international collections, including the Vatican; his caricatures and other drawings, paintings and editorial illustrations appeared in The New York Times, The National Observer, Reader’s Digest, as well as Svoboda, and publications for St. Martin’s Press, McGraw Hill and Random House; was adjunct professor of drawing and painting at Fairfield University for 24 years; lifetime member of the American Watercolor Society, known for his works done on location in Switzerland, France and Italy; over 60 of his mountain scenes were exhibited at the Musée de Bagnes in Switzerland; in 2015-2016 The Ukrainian Museum presented “Sixty Years an Artist: A Retrospective Exhibition of Works by Zenowij Onyshkewych” – December 30.