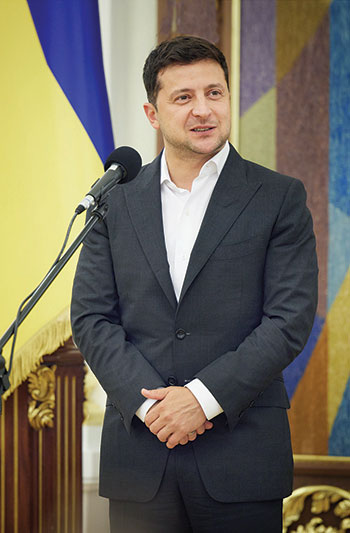 Ukrainian President Volodymyr Zelens­kyy speaks in front of the country’s Summer Olympic team during an award ceremony in Kyiv on August 17.

Trip to Ukraine will not include
independence festivities

KYIV – Ukrainian President Volodymyr Zelenskyy’s White House visit has been postponed by one day and will take place on August 31 due to an extended agenda of wide-ranging talks.

“Since the program of the visit has been expanded, the meeting between the presidents of Ukraine and the United States, President [Joe] Biden and President Zelenskyy, will take place on August 31. We have agreed with the United States to postpone this date for one day,” Ukrainian Foreign Affairs Minister Dmytro Kuleba told reporters in Kyiv on August 19.

Before his Washington visit, which Mr. Zelenskyy has sought for two years beginning when U.S. President Donald Trump was in office, the Ukrainian head of state will host outgoing German Chancellor Angela Merkel.

Ms. Merkel will first head to Moscow on August 20 and is scheduled to arrive in Kyiv two days later. 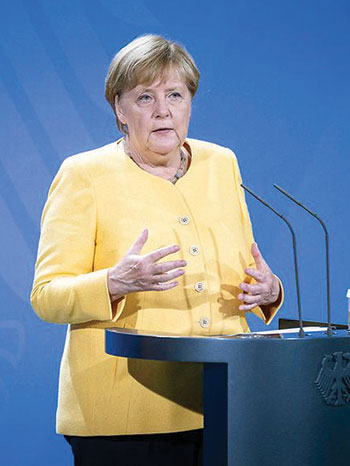 Kyiv has voiced frustration that its overtures to join the North Atlantic Treaty Organization (NATO, of which Germany and the U.S. are members, have been met with rejection. Ukraine has also bemoaned a deal made between Washington and Berlin without its participation. That deal allowed completion of the Nord Stream 2 (NS2) Russian pipeline project. Once it becomes operational, the pipeline will eliminate Ukraine as a strategic energy transit country and leave it more vulnerable to further aggression from its war-mongering neighbor, officials in Kyiv have stated.

U.S. President Joe Biden has defended the lifting of previously imposed sanctions on the project’s companies and related insurance companies as a fait accompli since it was more than 90 percent completed when he took office.

German state broadcaster Deutsche Welle reported on August 17 that the Baltic Sea underwater pipeline project that will pump more Russian natural gas to the country would be completed by August 23.

The date is symbolic for Ukraine because it coincides with the country’s national Flag Day and when a new diplomatic initiative, the Crimean Platform, is set to commence. That initiative is meant to muster international support for pressuring Russia to leave Ukraine’s Crimean Peninsula, which it forcibly annexed in early 2014.

In an expansive interview with The Washington Post published on August 18, Mr. Zelenskyy said the wavering over giving Ukraine a NATO Membership Action Plan (MAP) is an indicator to “other countries that you guys are not welcome here and Russia is just around the corner, increasing its clout.”

In June, Mr. Biden, when asked a “yes or no” question by a journalist in Washington about Ukraine’s NATO accession chances, said it needs “to clean up corruption.”
Responding to the NATO candidacy question, the U.S. president said that “school’s out” regarding graft and other issues in Ukraine that need to be addressed.

“It’s very popular to accuse Ukraine of corruption, and it’s not that I hold these views only since I became president, but I’ve always felt offended by this,” he said. “Because you know what? No country is free of corruption.”

Other NATO-member countries, such as Bulgaria, Romania and Montenegro, have been flagged over the years for corruption by European Union authorities.

Once completed, the $11 billion NS2 pipeline will render Ukraine’s east-west gas pipeline redundant and will have the combined capacity along with Nord Stream 1 to pump 110 billion cubic meters of gas yearly.

Not only will Kyiv be potentially left exposed to more Russian military belligerence, it will be deprived of more than $1 billion in hard currency revenue for transporting gas when its transit contract with Russian state-owned Gazprom expires in 2024.

The Russia-instigated war in the two easternmost Ukrainian regions of Luhansk and Donetsk that started with a covert invasion in April 2014 has led to the death of 14,000 people and internally displaced an additional 1.5 million Ukrainians.

It is Europe’s only ongoing, active bloody war.

Gas traders have noted that blue fuel prices are at a 20-year high in Europe due to Gazprom not providing enough gas for countries to store when they should be seasonably lower ahead of winter.

September future prices on the Netherlands’ TTF gas hub index showed spot prices hovering at $515 per 1,000 cubic meters over the past week.

Against this backdrop, Ms. Merkel, as the leader of Europe’s biggest economy, will visit Moscow first and then Kyiv.

German-Russian relations have been strained over Moscow’s war mongering and assassinations on EU soil, including in Berlin, the nation’s capital.

In December 2019, Germany expelled two Russian diplomats after prosecutors said they found evidence that the Russian government was involved in the killing of a Chechen separatist in Berlin.

Ms. Merkel has in the past taken part in so-called Normandy Format meetings with Ukraine, France and Russia to establish a roadmap to quell the Kremlin-instigated war in eastern Ukraine.

Her arrival to Kyiv comes behind promises of ensuring Ukraine remains a gas transit country and that Russia will be sanctioned should Moscow further harm Ukraine’s sovereignty and territorial integrity. Ms. Merkel hasn’t specified what actions would be taken or how she would ensure that Moscow would agree to renew a gas transit contract with Kyiv.

Mr. Zelenskyy will award Ms. Merkel the country’s highest order of merit, the Order of Freedom, Steffen Seibert, the head of the German Federal Government’s Press and Information Office announced on August 18. She will also “lay a wreath at the memorial Eternal Glory at the grave of the Unknown Soldier,” he added.

A joint news conference is planned after their meetings, according to the German government website.

She is considered a lame duck chancellor given that Germany will hold general elections next month after which parliament would form a coalition – if no majority emerges – and name a new chancellor.

Ms. Merkel said she will not seek another term and public opinion polls in Germany find that the environmental Green Party has strong chances of seizing the chancellorship. They oppose NS2 and have a cautious view of Russia.