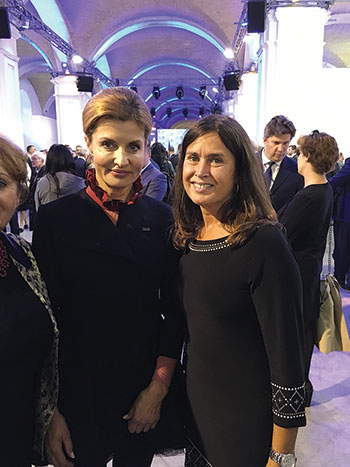 Tamara Olexy served two terms (eight years) as president of the Ukrainian Congress Committee of America. The UCCA’s recent Congress of Ukrainian Americans elected Andriy Futey as her successor, and our Kyiv colleague Mark Raczkiewycz spoke with him via Skype about his new role (See “Newly elected president of UCCA speaks about the tasks ahead,” in the October 16 issue of The Ukrainian Weekly). This week, we publish an interview with Ms. Olexy focusing on the accomplishments and challenges of the previous eight years. The interview was conducted via e-mail by Roma Hadzewycz.

She served as the director of the Ukrainian National Information Service (1990-1995); was an American advisor for Burson-Marsteller’s National Market Reform Educational Project in Lviv (1995-1996); and worked as a consultant specializing in project development of health programs, cultural exchanges and humanitarian assistance for such clients as New York Eye and Ear Infirmary, the Albert Schweitzer Institute for Humanities, and conducted intercultural training programs designed for relocating employees for such companies as Prudential and CARTUS (1996-1998).

Ms. Olexy has served as executive director of the UCCA National Office in New York since 1998.

First of all, we’re curious, how did it feel to be the first woman president of the UCCA?

For me it was a great honor to be elected president of the UCCA, not to mention its first woman president. But honestly, be it man or woman, leading this organization has truly been a privilege and I am grateful to have had the opportunity to serve as its president for two terms. That is not to say that at times the job was not daunting, especially given the political crisis in Ukraine which dictated much of our work and focus for the past three years.

Following in the footsteps of my predecessors was also a humbling experience, because the founders of this organization were true pioneers who had a cause greater than themselves. They were determined to unite the Ukrainian American community and do their utmost to help secure freedom for Ukraine and her people. They had a vision and accomplished so much for this organization and the greater Ukrainian American community. To follow in their footsteps, and to contribute my part to this greater cause, was an experience I will always remember.

During my time as president, I did my utmost to responsibly serve the UCCA in this position and I hope that our new president can build upon the successes of the past and guide us towards more success in the future for the greater good of the Ukrainian American community.

What would you say were the UCCA’s, and your, most significant accomplishments during your two terms in office?

For me it is hard to single out our most significant accomplishment, as I believe that we achieved a lot, particularly in light of the current situation in Ukraine.

Over the last several years, the UCCA held an unprecedented amount of engagements to advocate our community’s concerns, and I believe, as a result, we were instrumental in helping to build Congressional support for Ukraine against Russia’s continued aggression. It was through our community’s ongoing dialogue with our elected officials and leading opinion makers that we were successful in bringing the real situation in Ukraine to the fore, which resulted in the unanimous passage of the Ukraine Freedom Support Act in December 2014 – the most comprehensive aid package ever authorized for a European nation after the Marshall Plan six decades ago.

There were also many behind-the-scenes successes that many community members were not aware of. These accomplishments were the building blocs of our more public successes and were imperative in helping us to reach our goals, including the hours upon hours of work to establish new relationships with diverse ethnic communities in an effort to help bolster support for Ukraine.

I also believe that the government of Ukraine has finally begun to acknowledge the work of the UCCA, as evidenced by President Petro Poroshenko’s recent statement that Ukraine highly values our support in strengthening bilateral relations and the decades-long efforts of the UCCA to unify the Ukrainian American community.

It was also a pleasant surprise that Ukraine bestowed awards on a few of the UCCA leaders, including myself and my predecessor, Michael Sawkiw. Personally, I had the privilege of receiving the Order of Princess Olha of the III grade from President Poroshenko – something of which I am very proud. This award is not just an honor bestowed upon my person, but rather upon the entire organization, for all the work that the UCCA has done to assist the Ukrainian nation.

And, of course, the unveiling of the Holodomor monument was one of the greatest accomplishments of our community. It was a project that the UCCA worked on for almost 15 years. So, when I had a chance to stand before this magnificent, albeit solemn memorial, it was a once-in-a-lifetime event that I will never forget.

What were the most daunting challenges during that period of time?

I believe the most difficult challenge that the UCCA, and I as its president, faced is Russia’s ongoing hybrid war against Ukraine. At no other time in recent history has Ukraine’s existence as a sovereign nation been under such a severe threat as now. And this proved to be an extreme challenge not just for Ukraine, but also for the Ukrainian American community.

As a result of Russia’s illegal annexation of Crimea and its continued aggression and invasion in eastern Ukraine’s Donbas region, the work of the UCCA was steered toward advocating for greater assistance for Ukraine. In order to accomplish this, the UCCA worked to forge closer relationships with other ethnic communities; maintain constant contact with members of Congress and the administration in order to garner support for Ukraine; provide humanitarian assistance; and bring to the forefront the current situation in Ukraine by widely publicizing statements in the mass media; organize advocacy campaigns and protests; and utilize social media. All of our efforts have been aimed at helping Ukraine secure its sovereignty, territorial integrity and democracy.

And thankfully, due to our community’s efforts, we have been fortunate to secure bipartisan support for Ukraine within Congress.

Has the membership of the UCCA grown during the past few years? Please tell our readers how many organizations and individuals currently are members.

Yes, the membership of the UCCA has and continues to grow. During my tenure we were fortunate to revitalize several key UCCA branches, including the UCCA Southeastern Michigan (Detroit) and Syracuse, N.Y. We also welcomed SUSTA [Federation of Ukrainian Students Organizations of America] back into the ranks of the UCCA after many years of inactivity, and welcomed the Ukrainian American Society of Texas as a new member of the UCCA.

I also believe that the UCCA’s reach and influence has grown thanks to our online presence. UCCA’s Facebook and Twitter accounts have experienced a very high level of social engagement – the highest among Ukrainian American organizations. We continuously handle requests for information, share community events and mobilize community-wide action – all of which has increased our outreach dramatically. By raising public awareness through social media, and maintaining our cooperation with leaders of other ethnic organizations, the UCCA is positioned to make a difference for years to come.

That is not to say that we still don’t have a lot work to do in this area. That is why in the last few months of my tenure I reached out to several non-UCCA member organizations, encouraging them to consider returning to the UCCA. I believe that it is imperative for the Diaspora to speak with one united voice, as we are the only body that can truly impress upon the U.S. government that Ukraine needs help, and that Russian aggression is threat not only to Ukraine, but to the entire democratic world.

How has our community changed in the last eight years? What are the negatives and the positives?

I believe our community has changed greatly. Much of the change has to do with the current situation in Ukraine. Initially during the Maidan there was a surge of energy – an immense feeling of patriotism that overtook us all as a global community. Seeing Ukrainians come together in the face of so many hardships provided the boost that our community here needed. It bolstered our spirits and gave us the strength to unite and do everything in our power to help our brethren. The outpouring of support from Ukrainians around the world was enormous and resulted in hundreds of protests and meetings, and millions of dollars in humanitarian aid! We truly united as a community like never before!

But, unfortunately, we realized that the longer this Russian hybrid war continues against Ukraine – and becomes the status quo – the more there is a danger that we, as a community, will become complacent. So I feel that it is up to the UCCA to continue to mobilize our community because there are still many challenges facing Ukraine and our community, and we must remain vigilant.

That being said, our community is committed to Ukraine’s democratic future and I believe that working together we will not only assist our kinsmen in Ukraine, but we will help strengthen and unify our community here in the United States.

What would you say lies ahead for your successor?

Many of the challenges that lie ahead for my successor, Andriy Futey, will be related to the continued war in Ukraine, as currently there seems no end in sight to the crisis. The UCCA will, therefore, have to maintain the same, if not an increased level of vigilance and advocacy. Our organization will also face the continued difficult challenge of advocating for defensive lethal aid and increased sanctions against Russia. And, as more time passes, the UCCA will also be facing the difficult challenge of igniting enthusiasm within our community.

I feel that Mr. Futey has the experience and knowledge to successfully guide the UCCA through these difficult challenges, and I have the utmost confidence that he, and the entire Executive Board, will continue the important work of the UCCA and have much success in their future endeavors.

Any parting words to the Ukrainian American community?

I would like to thank the UCCA for having the faith in my abilities and giving me the opportunity to serve as president, it truly was a privilege. I would also like to take this opportunity to personally thank everyone I had the honor of working with for their continued counsel, cooperation and support over my eight-years in office.

I have done my utmost to represent the interests of the Ukrainian American community before the U.S. government, as well as to unify our community here in the U.S., so that we can be a strong united voice on behalf of our brethren in Ukraine. It has not been an easy task, but I feel that we have had some important success.

And last, but definitely not least, I would like to wish the UCCA’s newly elected president, Andriy Futey, the entire Executive Board, the National Council, UCCA member organizations and branches much success in their work for the good of our community and the Ukrainian nation. Slava Ukrayini!