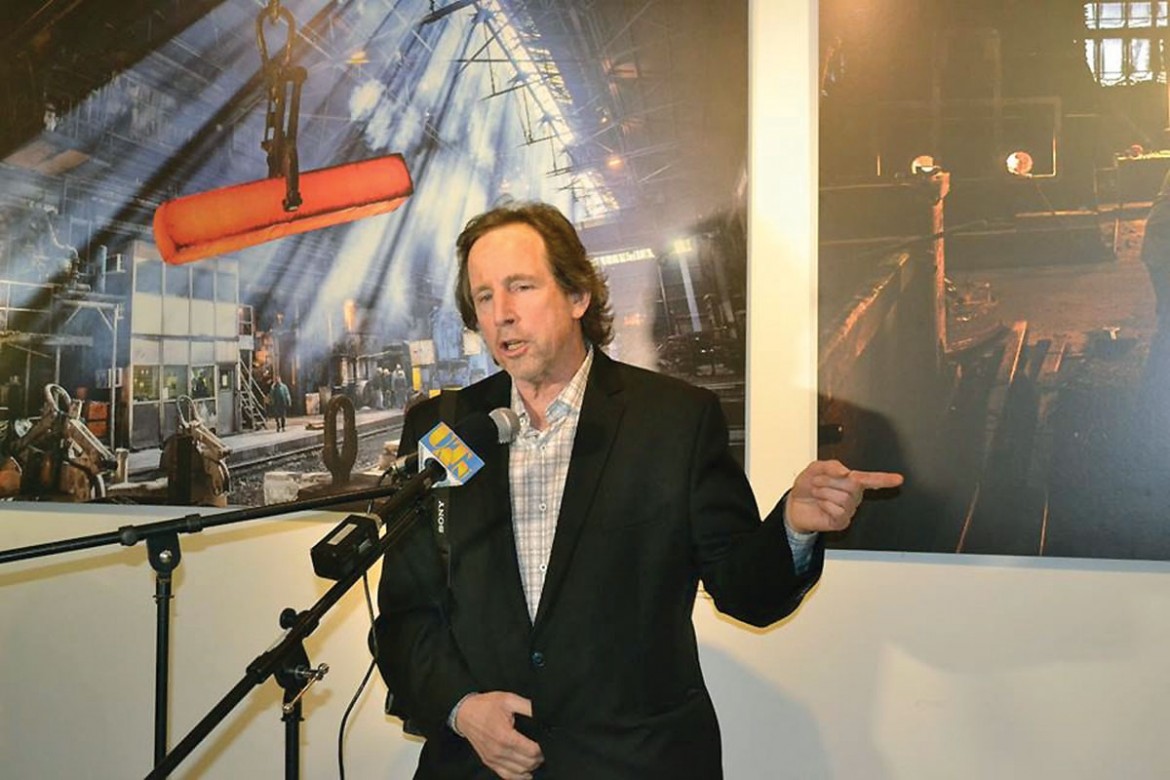 Charles Cherney talks about his career and thanks everyone in attendance.

CHICAGO – With the click of a camera shutter, a moment is captured indefinitely in time. “Outtakes,” a photo exhibition showcasing events through the photographic lens of Charles Cherney was unveiled at the Ukrainian National Museum on Friday, March 13.

The Pulitzer Prize-winning photographer’s images displayed moments caught during an array of Chicago sporting events. Mr. Cherney had the opportunity to be with these teams on the field, court or ice and in the locker room while celebrating their victories and capturing their priceless historical moments. Sports celebrations from all teams spanning the past 40 years are on display – baseball’s Chicago Cubs and White Sox, football’s Chicago Bears, basketball’s Chicago Bulls and hockey’s Chicago Blackhawks.

While listening to live music, enjoying appetizers and a glass of wine, some 250 attendees saw these sporting events through Mr. Cherney’s viewfinder. Photos on display from Mr. Cherney’s collection include moments from the Bears’ 1985 season under Coach Mike Ditka’s direction and the Bulls’ 1993 championship victory. Baseball moments from the Cubs feature both players in action and the reactions of fellow teammates and fans, as well as the moment during the ninth inning when the White Sox clenched the 2005 World Series pennant.

Many hockey moments from the late 1970s to the present day feature key players from the Blackhawks. Reggie Kerr and Stan Mikita are snapped mid-game as is Jonathan Toews of today’s team, when he scored his first goal in the NHL in 2007. Photos of the Blackhawks with the Stanley Cup in 2010 and Wrigley Field ready for the Winter Classic in 2009 come to life. 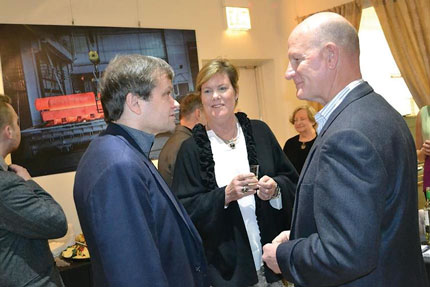 Congressman Mike Quigley and Chicago Blackhawks player Reggie Kerr chat with fellow attendees at the opening of the “Outtakes” exhibit.

Mr. Cherney’s images during the BMW Golf Championship tournaments capture the greens on a sunny day as golfers like Phil Mickelson and Tiger Woods march to the next hole to tee off.

Images for sports enthusiasts abound in this display and compliment Mr. Cherney’s images from the industrial side of Chicago via Finkl and Sons Co. steel mill. Large images of a 6,000-ton steel press and hot molten steel make viewers feel as though they just walked onto the site.

At the exhibit’s opening, Mr. Cherney was warmly welcomed by the museum and friends, including legendary Blackhawks hockey player Mr. Kerr and local CBS news anchor Rob Johnson. Illinois Congressman Mike Quigley was also in attendance and reiterated his unyielding support for Ukraine. The congressman also expressed his amazement about the spirit and talent within the Ukrainian community.

The Ukrainian National Museum is hosting this display of Mr. Cherney’s photographic work through April 5.

Mr. Cherney was born and raised in Chicago and is of Ukrainian heritage. His career in photography began in 1970 as an independent journalist. He worked his way up from smaller newspapers until he joined the Chicago Tribune as a team journalist. It was there that he won a Pulitzer Prize for Explanatory Journalism. Mr. Cherney is also a two-time winner of the Chicago Press Photographer of the Year award.

Mr. Cherney’s love of sports is expressed through the images on the walls of the Ukrainian National Museum. Besides covering all six Chicago Bulls championships, he also reported on the Olympic Games in France and Canada. Outside of sports, Mr. Cherney also covered the Bosnian conflict of the mid-1990s.