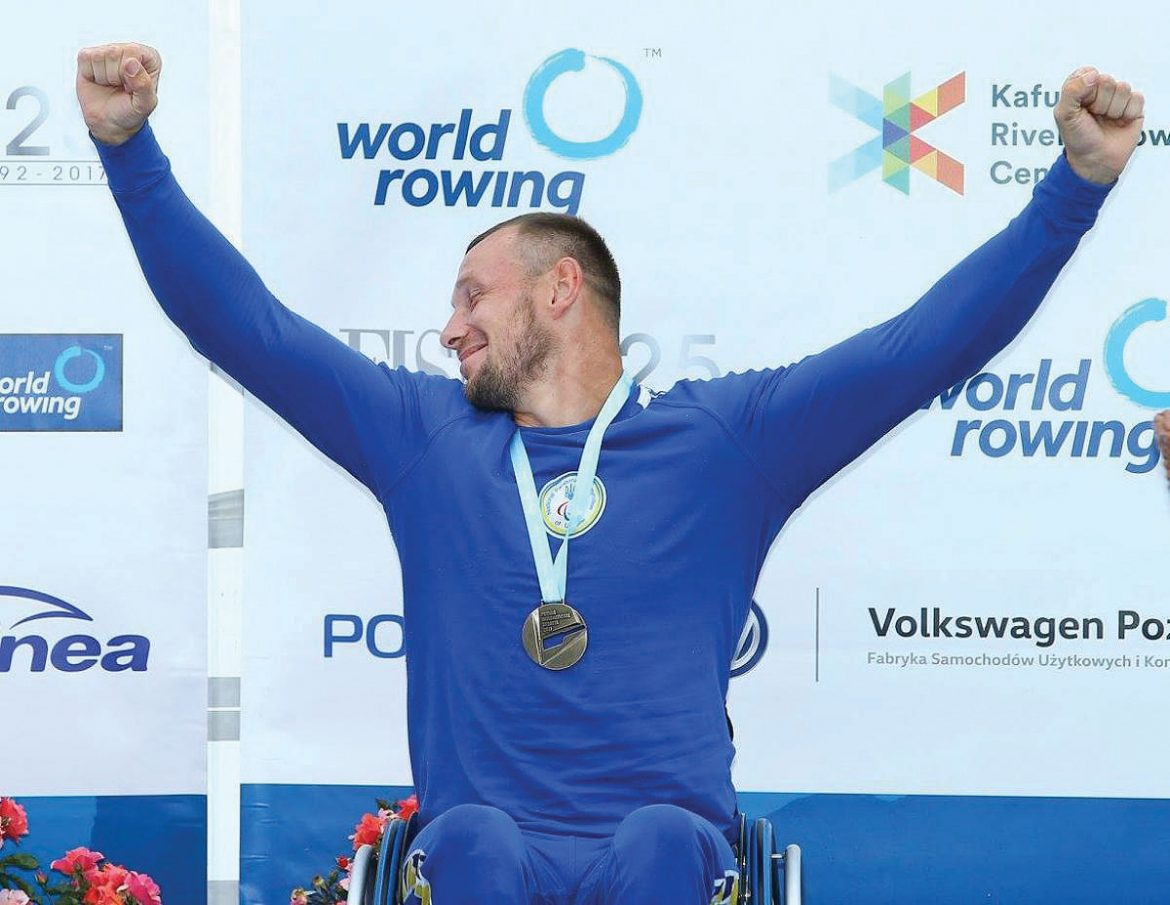 The competitive fire burning inside of Roman Polianskyi was ignited and fueled by his father, who instilled in his son a love of sports at an early age. This has served as the foundation for his dominance in Para-rowing since the Rio 2016 Paralympic Games. The youngster was always active athletically, even after being diagnosed at age 10 with hereditary spastic paraplegia (HSP) which affects the muscles with progressive stiffness and decreased elasticity in the lower limbs. The future Paralympic champion was not fazed by his disability.

“Once, when I was at the Burdenko Spinal Health Resort in Crimea, I took part in arm wrestling competitions,” Polianskyi recalled in an early August interview with Olympics.com. “I won first place with both right and left arms. That upper arm strength would come in handy on the water.”

Tragedy and an elixir
Roman remained active in sports as a teenager, but suffered two terrible tragedies at age 18 when he lost his beloved father to a work accident, and shortly thereafter his mother passed away. Reflecting back to those days, Polianskyi’s philosophy on moving forward in difficult times was “to start with small goals and move forward.” He felt fortunate and never forgot the character of his father, which gave birth to his will to win.

This competitive fire pushed Roman to pick up canoe sprint. Unfortunately, the sport was not yet part of the Paralympics program for Rio 2016, so Polianskyi transferred his fortified arm muscles into a different sport – Para-rowing, a Paralympic sport since Beijing 2008.

“I was attracted to rowing,” he said of his decision. “Water has really become my ‘elixir of life.’”

Dealing with distance
The year 2014 brought more challenge and adversity when war broke out near his home in Donetsk. Polianskyi was forced to flee and made the leap from one sport to another from a new home. He was officially an Internally Displaced Person (a refugee within his own country) in Odesa, forced to overcome uncertainty and fear. He turned what for most was a difficulty into a personal advantage.

Still another challenge followed when Para-rowing moved from 1,000-meter races to the Olympic distance of 2,000 meters. Time was required to make the proper adjustment.

Polianskyi would lose the World Championship in 2017 to Horrie, but came away from the defeat having learned a most valuable lesson.

“I thought for a long time about this race and about the fact that every man strives to be the strongest, but the hardest struggle is internal,” the 34-year-old Ukrainian shared in his chat with Olympics.com. “I remember it was the hardest race, bad weather. I realized that I had not yet reached the distance of 2,000 meters and felt that I was not ready yet. But I really wanted to win.”

Polianskyi increased his training regimen to 10 two-and-a-half-hour sessions per week and the results ensued. After rival Horrie had edged him out by less than a second at the 2018 World Rowing Championships, Roman claimed the world champion title in 2019, while setting a world record time of 9:12.99 seconds, a mark that still stands.

April 2021 saw him capture the European Championship by almost 12 seconds ahead of Great Britain’s Benjamin Pritchard. “My muscles seem to be designed for long distances, long work,” he admitted. “The long distance – it’s mine!”

Para sports power
Polianskyi aims to add a second consecutive Paralympics gold medal to his trophy case this August, and along with it a Paralympic-best record-breaking time in the PR1M1x (men’s singles). But this is not his only goal.

Of note: Roman’s wife, Oleksandra, is also a Para-rower. The Polianskyis enjoy watching movies, listening to music, cooking, barbeques in the village and swimming in a nearby lake.