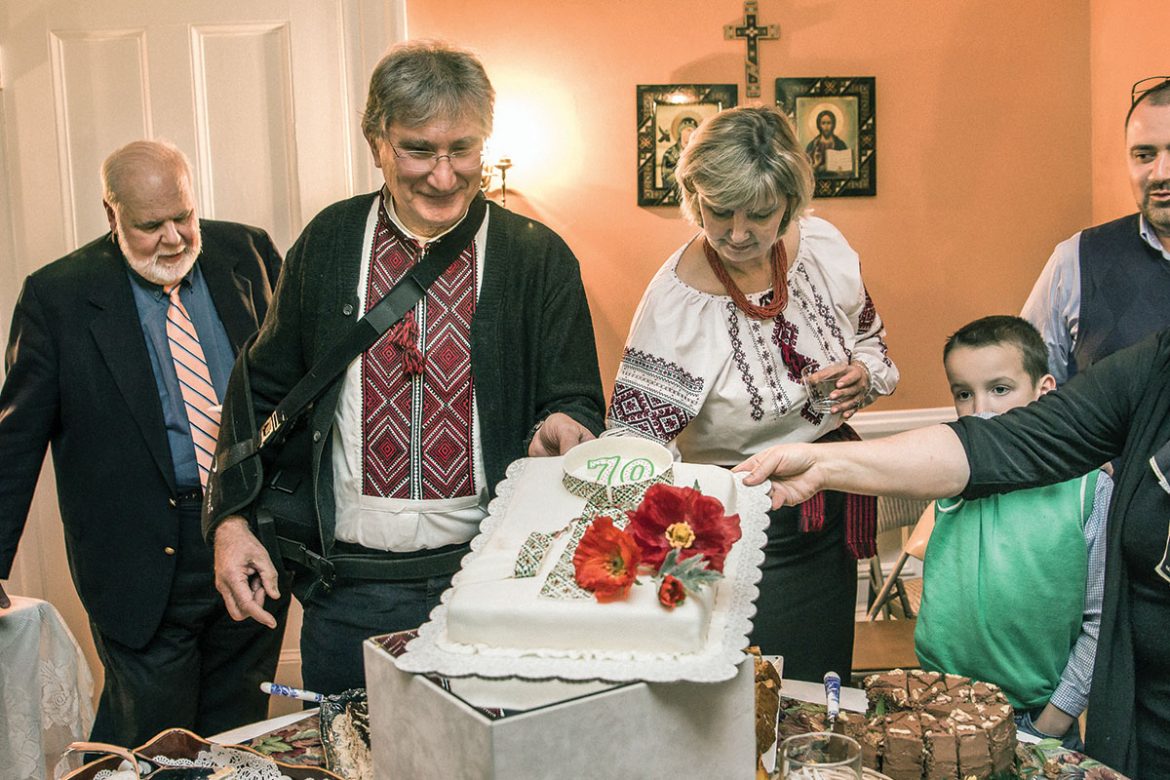 Ihor Kowal with the special birthday cake made by Lyuba Demchyk.

JAMAICA PLAIN, Mass. – On Saturday afternoon, November 11, some 80 members of Christ the King Ukrainian Catholic Parish in Boston gathered together with family and friends of Ihor Kowal, long-time choir director and cantor, to celebrate his 70th birthday and to mark his many years of liturgical service to the parish as well.

The gathering began with the celebration of vespers in the church by candlelight by the pastor, the Very Rev. Dr. Yaroslav Nalysnyk, with the full choir under the direction of guest choirmaster Alexander Kuzma of Hartford, Conn., who also served as cantor.

The service was followed by a reception in the Parish Center which included a cocktail reception, a formal program, a buffet dinner, an impressive dessert station and, later in the evening, the official birthday cake which was in the form of a Ukrainian embroidered shirt, which was designed and put together for the occasion by Lyuba Demchyk.

Parish Council Member Myron Kravchuk acted as master of ceremonies; Father Nalysnyk opened the program with a prayer. The pastor thanked the honoree for his tireless work with the choir and the ongoing liturgical life of the parish, and then presented him with a gift on behalf of the parish community.

In commenting on the work of Boston’s choir director, Mr. Kuzma said, “Ihor brought together a remarkable group of young people who cared about our liturgy and were inspired to ennoble it with music and who then went on not only to help foster the rebirth of our Church but the rebirth of Ukraine as well. Among these choristers were Bishop Borys Gudziak, now president of the Ukrainian Catholic University in Lviv and ordinary of the Ukrainian Catholic diocese in Paris; Dr. Borys Lushniak, who served as the acting surgeon general of the United States: Marta Baziuk, president of Winrock International, which promotes women’s issues; Larysa Kurylas, the architect of the Holodomor Memorial in Washington; and Stephen Szyszka, retired submarine commander in the U.S. Navy. “

“Ihor’s choral work was the direct inspiration for my efforts in founding the Yevshan Ukrainian Chorus [with which Mr. Kowal sings on occasion] in Hartford in 1999 and for Stephen Szyszka founding the Spiv Zhyttia Choir at the Holy Family Ukrainian National Shrine in Washington D.C.,” Mr. Kuzma added. “Also in November 1987 our choir in Boston joined with the choirs in Hartford and New Haven (altogether with more than 100 members) for a special liturgy at St. Joseph’s Cathedral in Hartford at the beginning of the celebrations for the millennial year of Ukrainian Christianity and then in April of 1988 a similar pontifical liturgy with combined choirs was held in Boston’s Holy Cross Cathedral.”

The performers that afternoon included the women’s choir, pianist Myroslav Vintoniw, sopranos Oksana Paduchak and Olha Lisovska, and the men’s chorus, joined by Mr. Kuzma; Eugene (Yevhen) Moroz, bass-baritone and long-time choir director of St. Andrew’s Ukrainian Orthodox Church Choir in Boston; and the honoree’s son Adrian Kowal, who flew in from Italy for the celebration.

Dr. Andrew and Motria Holowinsky, who spoke on behalf of the parish in both English and Ukrainian, said, “We, your friends, recognize your faithful service to our parish as its choirmaster – for this we are very grateful. …You have shown yourself to be a man of great musical ability and vision, a man of courage, energy, humility and, above all, integrity.”

The honoree’s wife, Irena, also spoke, noting: “As a church choir director, husband, father, as an individual, he gives his very best. Sometimes, it’s difficult to live with him as he expects people around him to live by his high values.” She added: “Self indulgence is not in Ihor’s vocabulary. He’s endowed with a spirit of generosity which doesn’t ask for anything back. His love for music, especially liturgical music, nature, his dedication to the community, his humorous insight keep him fresh and young.”

Mr. Kowal then took the floor, stating: “A wonderful evening and a complete surprise. I do not like being in the limelight. Thank you all for coming out. What I do for our church in Boston is what every believer should do. Praise the Lord by whichever means one can and contribute to our parish life. Some people are good at embroidery, some people can fix church plumbing/electricity, some tidy the church grounds, some use their artistic talents, some contribute their cooking skills, etc. There is a place for everyone in our community to contribute their special talents and in that way give thanks to the Lord.” 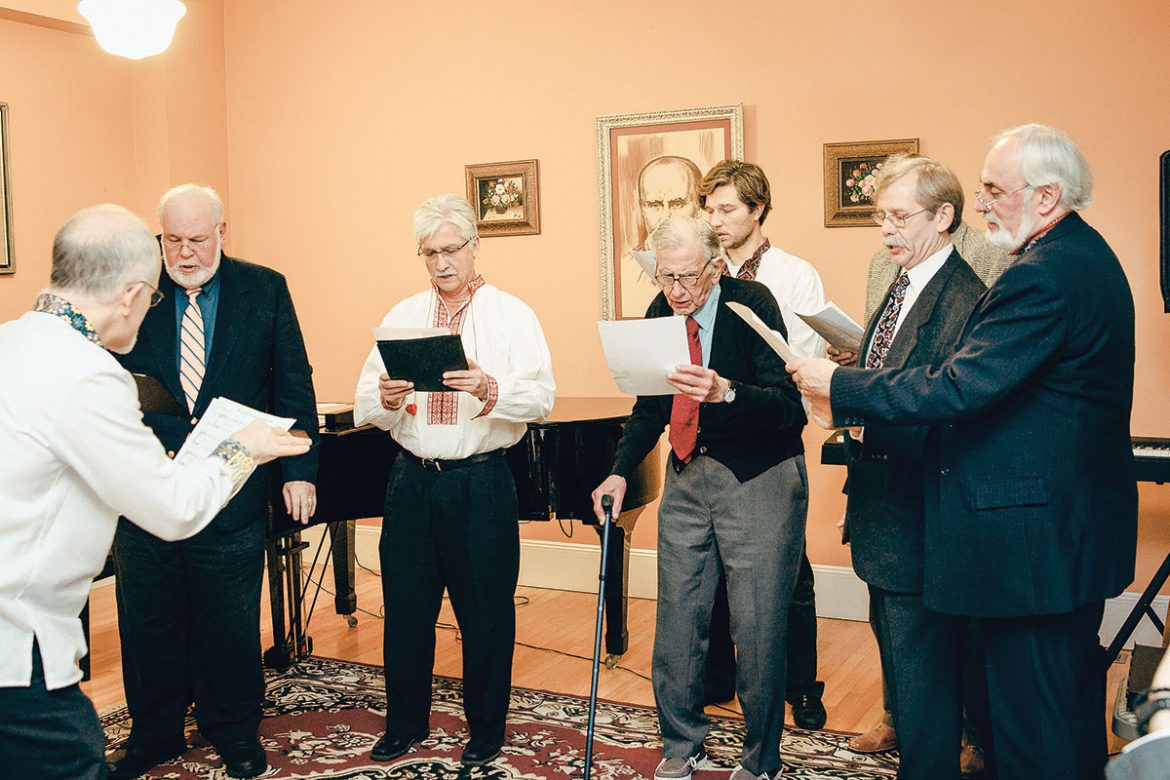 “I have a fondness for our various liturgies,” Mr. Kowal continued, “and particularly the associated liturgical music that goes back a thousand years. It is for this reason that I formed a new choir here at Christ the King in Boston some 37 years ago. The choir consisted mostly of young people and the average age was only 30! While I was away in Europe the choir had a number of conductors, including Alex Kuzma, who greatly added to the repertoire, Marika Kuzma, Yuri Minajliuk and Neil Raymond.”

Mr. Kowal was born in Coventry, England, in 1947. His father was an accomplished clarinetist and the choir director for the local Ukrainian community, and Ihor picked up his love of music, both liturgical and secular, from him. He studied piano and voice from the age of 7 in Coventry and as a boy soprano took first prize in the Coventry Music Festival. At age 18 he organized his first choir at the local Ukrainian Youth Association branch and also organized a youth choir with members age 10-18 who sang the liturgy in four voices. One of the members of that choir was Pavlo Hunka, who has gone on to become an internationally known bass/baritone opera singer.

Mr. Kowal attended the Lanchester Polytechnic and the Polytechnic of Central London, majoring in international trade and finance. In 1975 he came to Boston and enrolled in extension courses in counterpoint and harmony at the New England Conservatory of Music and Harvard University. A short time later he married Irena Salecka. In the fall of 1980 he began to organize a new choir of young people at Christ the King Ukrainian Catholic Church in Boston and they sang their first public liturgy on Christmas Day according to the Julian calendar on January 7, 1981.

He worked for a CAD/CAM (computer aided design and manufacturing firm) that sent him to Germany to set up its Central and Eastern European division in 1990. Two years later, he moved to a British firm, which sent him to Kyiv to manage a wholly owned Ukrainian subsidiary and he spent the next 12 years there, retiring in 2005. While in Kyiv he sang with the Vydubychi Choir and he also took courses in Ukrainian liturgical music through the Ukrainian Catholic University in Lviv.

Mr. Kowal has been married to Irena Salecka Kowal (a noted playwright and novelist with works in both English and Ukrainian) for 42 years. He has two children: Adrian, who lives in Tuscany with his wife and daughter, and owns and runs businesses in London; and Sonia, who lives with her husband in Cambridge and works with investments for non-profits.