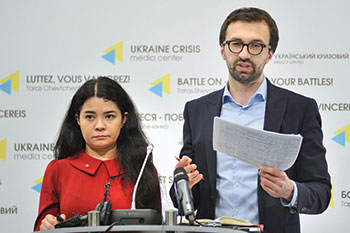 Sevgil Musayeva-Borovyk and Sergii Leshchenko speak at their press conference about the “black bookkeeping” of the Party of Regions.

KYIV – Documentation of the expenses of the Party of Regions on its political activities have been made public, National Deputy Sergii Leshchenko and editor-in-chief of Ukrayinska Pravda Sevgil Musayeva-Borovyk revealed at a press briefing at Ukraine Crisis Media Center on May 31.

“These are expenses on Ukrainian politics from corrupt sources. They demonstrate how the Party of Regions was being financed and what the money in question was spent on,” explained Mr. Leshchenko. He said there are documents certifying the receipt of large sums in cash for accomplishing defined activities. The documents contain surnames, the sums received and the goals that they were set to achieve, and they are accompanied by signatures.

The documents comprise 22 pages and pertain to the second half of 2012. The amount in question is 466 million (U.S.). “However some documents that cover October-November, which was the most active period of the 2012 election campaign, are missing,” added Mr. Leshchenko.

Among the biggest expense lines in this “black bookkeeping” are the bribes to the members of Ukraine’s Central Election Commission, to national deputies from other factions for their votes cast in favor of the Party of Regions positions, as well as to third parties.

“There is very serious material demonstrating that the Our Ukraine party was financed in 2012 from accounts of the Party of Regions. In a similar way, the Communist Party was partially financed,” said Mr. Leshchenko.

According to Ms. Musayeva-Borovyk, the chief curators of the Party of Regions in the Parliament were former head of the Budget Committee Yevhen Genner and Vitaliy Kalyuzhny. “They were receiving large sums of money to carry out activities of the party. …This money had its source – most likely it was obtained from the state budget through corrupt schemes. This demonstrates how important it is to change legislation on transparent financing of parties,” she underlined.

According to Mr. Leshchenko, the documents also disclose information on political PR on the TV channels Inter and ICTV. “This money was used to pay for editorial materials in media and for preparation of supportive materials. These expenses account for $1 million monthly. …It took place in the most active period of the election campaign. The money was used, not to place political advertising that was legally processed through a foundation and monitored by designated observers, but to place paid editorial materials,” he explained.

Mr. Leshchenko and Ms. Musayeva-Borovyk added that after the information on these documents in place was released, a series of politicians in office made statements indicating that their names would be mentioned on the lists and disproved their involvement in advance. “But in the documents that we have, these names are not mentioned. They’ve overreacted a bit in anticipation,” said Mr. Leshchenko, adding that he was referring to Oleh Lyashko’s Radical Party and the Svoboda party.