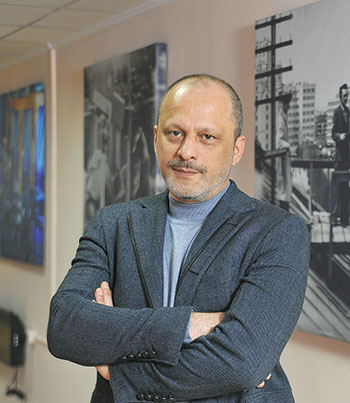 KYIV – If politics wasn’t behind the dismissal of public broadcasting chief Zurab Alasania, then the shifting of its date until after the March 31 presidential election was.

This week the general director of the Public Broadcasting Company of Ukraine (UA:PBC) had his contract truncated, effective on May 6, two years before its expiration.

By 2021 he was supposed to transform the Soviet-era dinosaur, consisting of 4,500 employees, 23 branches, 26 television channels and 28 radio stations, into a shell with a foundation modeled on the British Broadcasting Corporation or the Public Broadcasting Service in the U.S.

That endeavor was pre-emptively cut short on January 31 when the broadcaster’s supervisory board ended Mr. Alasania’s tenure less than two months before the presidential election by secret ballot after changing the agenda during a regular meeting.

The vote was initiated by a Radical Party representative who sits on the governance board – each parliamentary faction gets one seat while civil society members get one seat more than the total given to factions. (Currently there were 17 seats: eight for parliamentary factions and nine for non-profits.)

An uproar ensued among some of the civil society members of the board, independent journalists and media watchdogs.

They decried the non-transparent and closed manner in which Mr. Alasania was dismissed, and raised questions about the political nature of the board’s vote, how it is governed and the overall future of the public broadcaster.

For example, the January 31 board meeting’s minutes show that Vyacheslav Kozak, the Radical Party representative, initially called for the general director’s dismissal for not showing President Petro Poroshenko during significant news events.

That was later stricken from the cause for his contract’s cancellation. Instead, lack of qualifications was included, as was mismanagement at the non-profit affiliated with UA:PBC through which it receives donor funding.

Last year, $10 million was donated, all of which was sourced from foreign government assistance programs, including the U.S. Journalists, some board members and NGOs have consistently questioned the UA:PBC’s independence, especially on the financial side.

The non-profit that supports Ukraine’s public broadcaster was founded in 2014, three years before Mr. Alasania was appointed. He told The Ukrainian Weekly that whatever was found in an internal audit was before his time and he promised to improve the documentary paper trail at the non-profit, although it isn’t run by him.

The UA:PBC head said his dismissal was “political, economic and personal.”

The political aspect is known. Aside from missing key events like President Poroshenko addressing the United Nation’s General Assembly, UA:PBC no longer gives each of the Verkhovna Rada’s 450 deputies 20 minutes of airtime as was required before separate laws in 2014 and 2016 were passed to establish the broadcaster and shed its Soviet skin.

To the chagrin of the powers that be – and despite the fact that UA:PBC occupies less than 1 percent of TV market share – Mr. Alasania aired up to three popular investigative journalism programs that irked politicians of all stripes.

On the personal side, the broadcasting chief has “made enemies where he shouldn’t and could’ve avoided,” Yevhen Hlibovytsky, a supervisory board member from the civil society side, told The Weekly last week.

Mr. Alasania is known for being strong-willed, but “how else could’ve I rebuilt the Soviet system at UA:PBC?” he said. That process is still under way.

Indeed, he reduced the staff from more than 7,000 to around 4,500. He upgraded the obsolete, virus-prone computers and eliminated antiquated positions like typists. He started renting out premises to earn extra income, developed a cellphone application and increased social media presence.

All this was achieved while funding approved by Parliament last year was half and this year only 60 percent of what was supposed to be allocated – 0.2 percent of the state budget based on law.

How can anyone expect quality programming and content when “I’m stuck paying only salaries?” Mr. Alasania commented.

Many of the board members could also use a lesson in good-faith practices and governance loyalty – instead of leaking news, they should stay committed to building UA:PBC into a true public broadcaster that could promote pluralism in a media landscape dominated by oligarchs and their personal agendas.

Is Ukraine ready for a public broadcaster? Yes, board member Mr. Hlibovytsky said: “Do you think the founding fathers of America were ready for the challenges of building a democracy? You’re never ready for challenges that you’re facing. You’re just responding to these challenges. It’s a key reform, needed reform.”

And no, the reasons for dismissing Mr. Alasania, “have no merit,” he added. Fellow board member Svitlana Ostapa of the Detektor Media watchdog concurred, based on her Facebook posts.

Which is why Mr. Hlibovytsky, a former journalist himself, is going to the courts to annul the board’s decision. On January 31, when the board voted to dismiss the broadcasting chief, he left during the meeting for medical reasons related to his wife and was unaware that the matter would be put on the agenda ad hoc.

“Of course, I would’ve voted against it,” he stated.

The extraordinary board meeting on February 12 that extended Mr. Alasania’s contract until after the presidential elections was “not only illogical, but also perilously unprofessional,” he added on Facebook. “It is arbitrary, which diminishes, but does not improve, the quality of company’s management.”

To set the foundation for a BBC-like broadcaster, financing has to increase. The corporate structure must improve, and that should start with appointing a chief TV producer (radio already has one and enjoys a 4 percent weekly coverage). Corporate governance should remain open and transparent – it has for the most part, but, hopefully, the January 31 meeting was an anomaly.

More attention should be paid to significant news events, some of which UA:PBC didn’t broadcast live and reported on only later. Most of all, more patience and foresight are required of board members who shouldn’t expect changes overnight, especially when they’re building something from scratch and are occupying seats on the public broadcaster’s governing body for the first time.