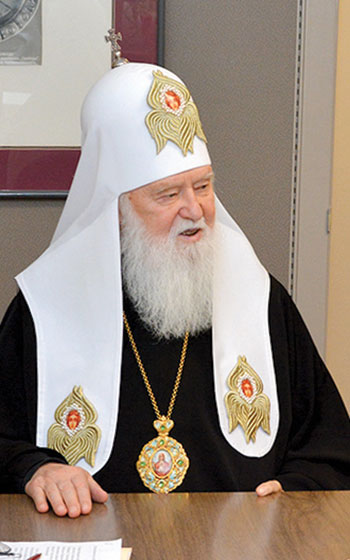 The visit occurred on November 7, during the primate’s most recent pastoral visit to the United States, where he has some 20 parishes. At the UNA, Patriarch Filaret addressed employees, blessed the staff and the premises of the Home Office, and gave an exclusive interview to editors of Svoboda and The Ukrainian Weekly.

This year marks 50 years since you became metropolitan of Kyiv. What has changed since that year, 1966, when the Church was still under pressure from the Communist regime, to today? How has the role of the Church changed?

Our task at the time of the Soviet Union was to maintain the people’s faith despite the unfavorable circumstances, the atheism of the government, the limits on freedom of religion. We could serve and preach only in churches, but the Church succeeded in saving the people’s faith in their hearts and souls. This faith among the people became one of the reasons for the fall of the USSR. The godless system did not have faith; in fact, it attempted to create its own religion. And it fell apart due to the power of the people’s faith in God.

Today in independent Ukraine we have the freedom to preach not only in churches, but also on the radio, on television, in the press. …Principles of Christian ethics are taught not only in Sunday schools, but in regular schools. This teaching is part of the curriculum and it is taught with the permission of parents. …

The Ukrainian state needs the support of the Church. Without such support, the state cannot exist. In Ukraine, the Ukrainian Orthodox Church – Kyiv Patriarchate, which has close to 20 million believers, became this foundation. Also, the Ukrainian Greek-Catholic Church holds strong positions in support of Ukraine’s statehood. And that is why the independent state has a strong foundation.

Russia’s war against Ukraine has demonstrated that the Ukrainian Orthodox Church of the Moscow Patriarchate is not on the side of the Ukrainian state. Their peace is a peace under conditions of enslavement. Our peace is a just peace in an independent Ukraine, where a person has complete freedom. And we stand for such a peace. The unity with Russia that is sometimes proposed means loss of statehood. This has been the historical experience of Ukraine.

I have served in the Kyiv cathedral for 50 years. There were difficult times, and now it has seemingly become easier. But we are divided, and our goal is to unite all Orthodox in one Church independent of Moscow. And this process of unification has already begun.

First of all, the faithful themselves are transferring to the Kyiv Patriarchate, for they understand that our Church always stood with the people. This was manifested during the Revolution of Dignity, when our Church stood up against the administration of Viktor Yanukovych. After the executions of the Heavenly Brigade on the Maidan, our Synod adopted a decision to not pray for this criminal regime.

The Kyiv Patriarchate was with the people not only in word, but in deed as well. We were not afraid of the authorities. We did not support a regime that did not serve the people. The truth emerged victorious and Yanukovych fled abroad with his supporters.

And we not only pray, but also provide concrete assistance. Communities are fund-raising and collecting supplies to help the military; they support the families who lost loved ones in the war and those internally displaced. Our military chaplains travel to the frontlines; they are very much needed by the soldiers. Thanks to the Church’s initiatives, this volunteer movement has spread beyond Ukraine, to the United States and the world.

If our Orthodox Churches were not divided, there would be no war. Vladimir Putin would not have dared to attack Ukraine without the support he has from the pro-Moscow Church and other pro-Russian forces in Ukraine.

Why has a portion of Ukraine’s population remained with the Moscow Patriarchate?

Our goal is to return the people’s faith to their own Ukrainian Church. This faith will be buttressed by the renewal of prayer in union with the Ecumenical Patriarchate, with world Orthodoxy. Then we will be joined by bishops and priests of the Moscow Patriarchate [in Ukraine]. This unity is supported by the president of Ukraine, the Verkhovna Rada, the government, the intelligentsia and the faithful. Thousands of letters were sent to appeal to Ecumenical Patriarch Bartholomew to recognize the autocephaly of the Kyiv Patriarchate.

Patriarch Bartholomew has all the basis and the right to make this decision. I remind you of 1924, when the Orthodox Church in Poland was given autocephaly thanks to an appeal by the government. And that Church was much smaller than ours. There is no reason for him not to recognize the Ukrainian Church. 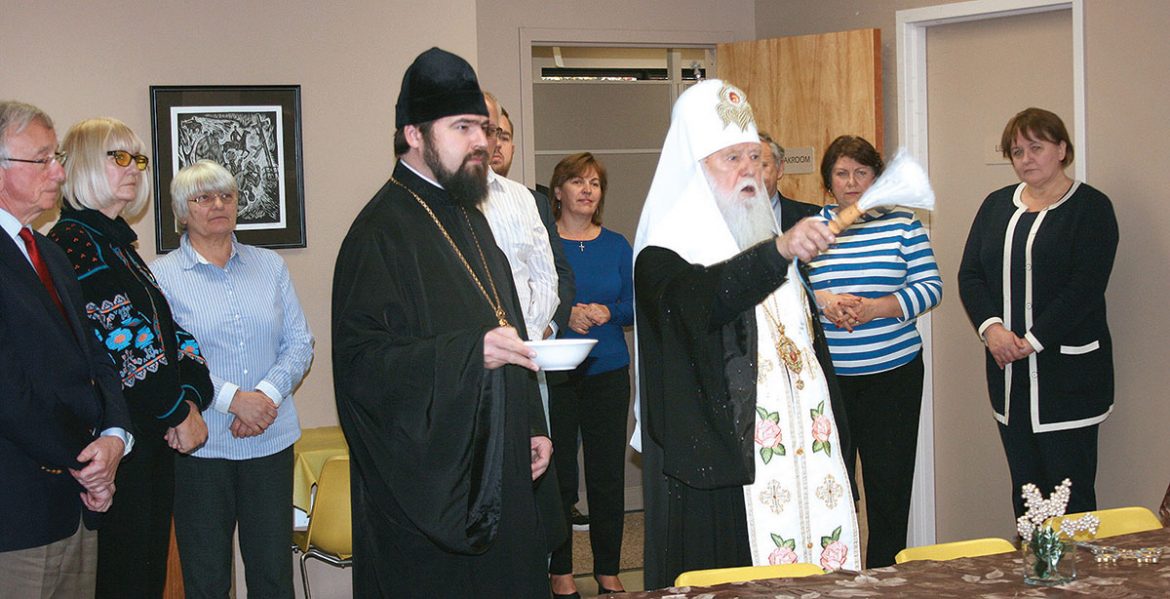 How are your relations with the current leader of the Ukrainian Orthodox Church – Moscow Patriarchate, Metropolitan Onufriy?

I know many bishops who sympathize with our autocephalous Church, and there are clergy also. We expect that they will go over to the Kyiv Patriarchate. That is why I tell my clergy and bishops that they should not do battle with the clergy of the Moscow Patriarchate – because they are our brothers and the time will come that we will serve together. It is easier to unite with friends than with former enemies.

In cities where both Patriarhchates have their churches, this eventual unification will be painless; but in villages and towns where there is only the Moscow Patriarchate, that will be more difficult. There, the struggle for assets, for churches, is continuing. But right now in the Verkhovna Rada there is a draft law that will help to settle such complex questions. Unfortunately, however, currently there is no mechanism that permits transfer [of churches] to another, that is, to the Kyiv Patriarchate.

Metropolitan Onufriy and I meet formally, but Moscow does not allow communication with us. Nor does it allow its priests to do so.

As far as the Ukrainian Autocephalous Orthodox Church is concerned, although we have the same goal, this smaller Church is still under the control of Moscow. When we were supposed to have a sobor of unification on September 17, 2015, the UAOC was not allowed to participate.

Moscow’s mission is to prevent unification.

Did the Russian Orthodox Church change in these new circumstances?

Today it is clear who serves the Ukrainian nation and who does not.

So, is it possible to create one Ukrainian Orthodox Church in Ukraine? How long will it take?

And how are your relations with the Ukrainian Orthodox Church of the U.S.A.?

Lately, our relations have improved markedly. Metropolitan Antony and Bishop Daniel, who has been nominated for archbishop, are interceding with Patriarch Bartholomew regarding recognition of the autocephaly of the Kyiv Patriarchate. The Church greatly helps Ukraine, and for that reason we meet often in Kyiv and discuss our further plans.

…After our visit here, I am traveling to the Consistory of the Ukrainian Orthodox Church of the U.S.A. in Bound Brook [N.J.] and this, too, is proof of our brotherly relations.