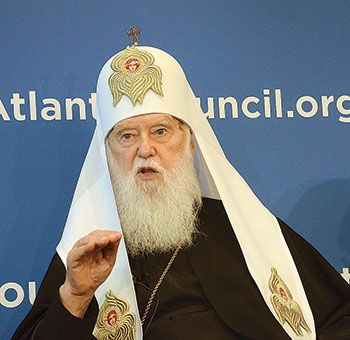 Patriarch Filaret, speaking at the Atlantic Council, discusses the positive effects the unification of the Kyiv and Moscow patriarchates of the Ukrainian Orthodox Church would have on Ukraine and in preventing Russian President Vladimir Putin from establishing a new Russian empire.

This unification, he assured a large gathering at the Atlantic Council on September 19, will not only resolve this unnecessary continuing split within the Church, but may also play a major role in stopping Russian President Vladimir Putin’s continuing efforts to return Ukraine to the realm of the “Russian empire.”

Patriarch Filaret noted that the re-establishment of that Russian Empire would not be possible without Ukraine, because the other former East European member countries are now members of NATO.
“And, therefore, to prevent the start of this event, we need to stop Putin,” he said. “And to do so, Ukraine has to be a strong nation, with a strong army and a strong spiritual base. Because without this base – which is the Church – the strong nation is not possible.”

That is what his Church is doing right now, he pointed out. It is building this spiritual base of freedom, human rights and democracy. But the Ukrainian Orthodox Church today is divided into two major parts: one – the Kyiv Patriarchate – defends the interests of the Ukrainian government and country, and the other – the Moscow Patriarchate – defends the interests of Russia. There is also a third Church – the Ukrainian Autocephalous Orthodox Church – that supports joining with the UOC-KP.

The Russians see the UOC-KP as uncanonical. But when the Ukrainian Church receives a Tomos of Autocephaly from the Ecumenical Patriarchate, the UOC-KP and the UOC-MP could be united. As a result, Mr. Putin would not have any of the social support from the churches and society in Ukraine that he has today, according to Patriarch Filaret.

“The process will be based on freedom, without any force,” he said. “The bishops, parishes and clergy will freely choose whether it will be a Russian or Ukrainian church,” he said.

Patriarch Filaret estimated that two-thirds of the Moscow Patriarchate churches would choose to switch to the unified Ukrainian Orthodox Church. The other one-third will remain in Ukraine as is, with equal rights as the Ukrainian Churches.

As for the history of Moscow’s and Kyiv’s control of the Orthodox Church in that region of the world, Patriarch Filaret pointed out that in 1948 Moscow celebrated the 500th anniversary of the autocephalous Russian Orthodox Church, while the Ukrainian Church has a history that transcends 1,000 years. “So who is the mother, and who is the daughter?”

Asked about the chances of resolving Moscow’s annexation of Crimea and the current military crisis in the Donbas region, Patriarch Filaret said he is optimistic: “We anticipate that Russia will be forced to leave Donbas. Then it will leave Crimea, because Ukraine will not give away Crimea.”

“And this will be the result of the weakening of Russia,” he said, adding, “We are not against Russia and the Russian people. We are against the aggressor.”

“When Russia stops being an aggressor, we will be co-existing peacefully,” the patriarch noted.

He thanked the United States for its support of Ukraine, and said he hoped that it will help Ukraine finish its religious war, hopefully, this year.

Patriarch Filaret began his religious career in 1950, when he was ordained in the Russian Orthodox Church (ROC). After graduating from the Moscow Theological Academy two years later, he taught at seminaries and held various posts within the ROC in Ukraine, Egypt, Austria and Russia. He became the Moscow Patriarchate’s archbishop of Kyiv and Halych in 1966, and two years later became the metropolitan of Kyiv and Galicia, the first Ukrainian in that position in 150 years.

Being a church leader in the Soviet Union had its special conflicting problems, Patriarch Filaret noted in response to a question.
“In the Soviet times, the bishop was appointed only with the approval of the KGB.”

“If the KGB did not approve, the candidate would not become a bishop. Therefore, all the bishops during the Soviet times were forced to have contacts with the KGB, and the bishop did not have the right to independently appoint a priest to a parish,” he explained. “Any nomination for the priesthood by a bishop would have to be coordinated and approved by the special KGB unit in charge of religious issues in Ukraine.”

“Our Church survived those Soviet times. And the Soviet Union fell apart as an atheist state, thanks to the Church,” Patriarch Filaret underscored.

The discussion with Patriarch Filaret at the Atlantic Council was moderated by the director of its Eurasia Center, John Herbst, who served as the U.S. ambassador to Ukraine from 2003 to 2006.

Upon coming to Washington on September 18, Patriarch Filaret paid a commemorative visit to the capital’s Holodomor Memorial, as he did during his previous visits here in recent years.

He was also welcomed and honored with a reception at the Embassy of Ukraine.

His U.S. schedule also included visits to Chicago and Cleveland.