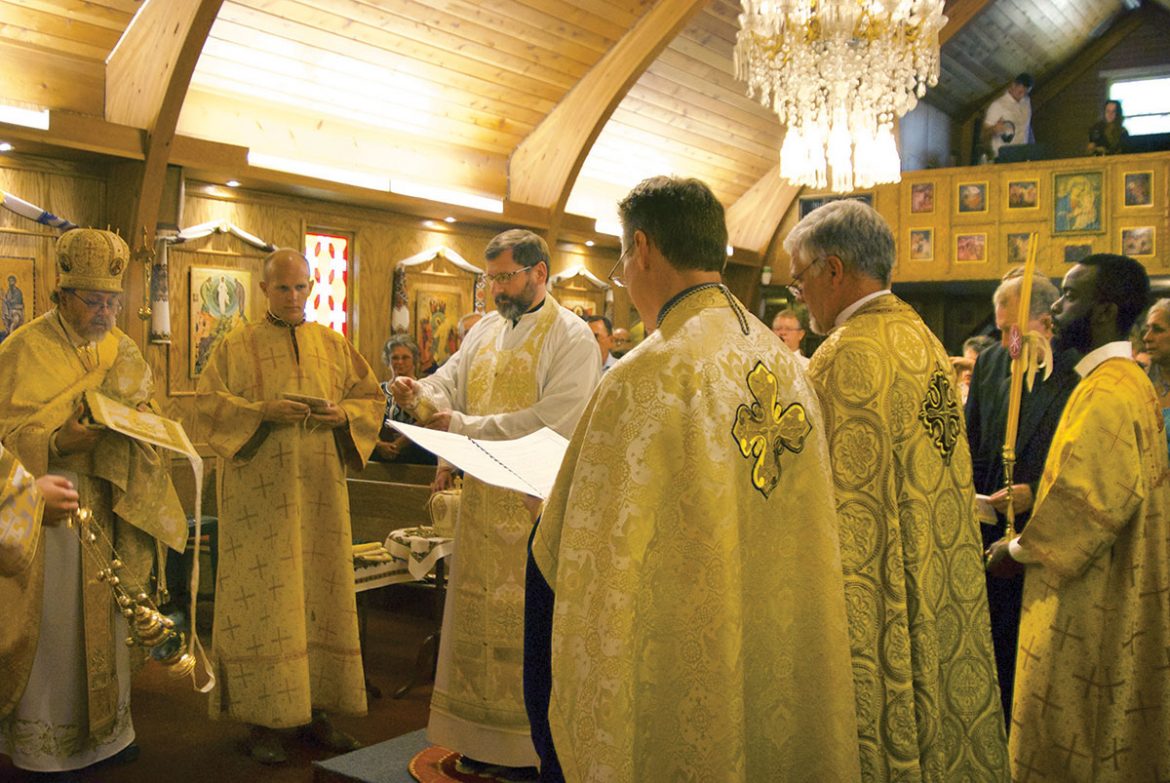 Patriarch Sviatoslav vests in the midst of the congregation. 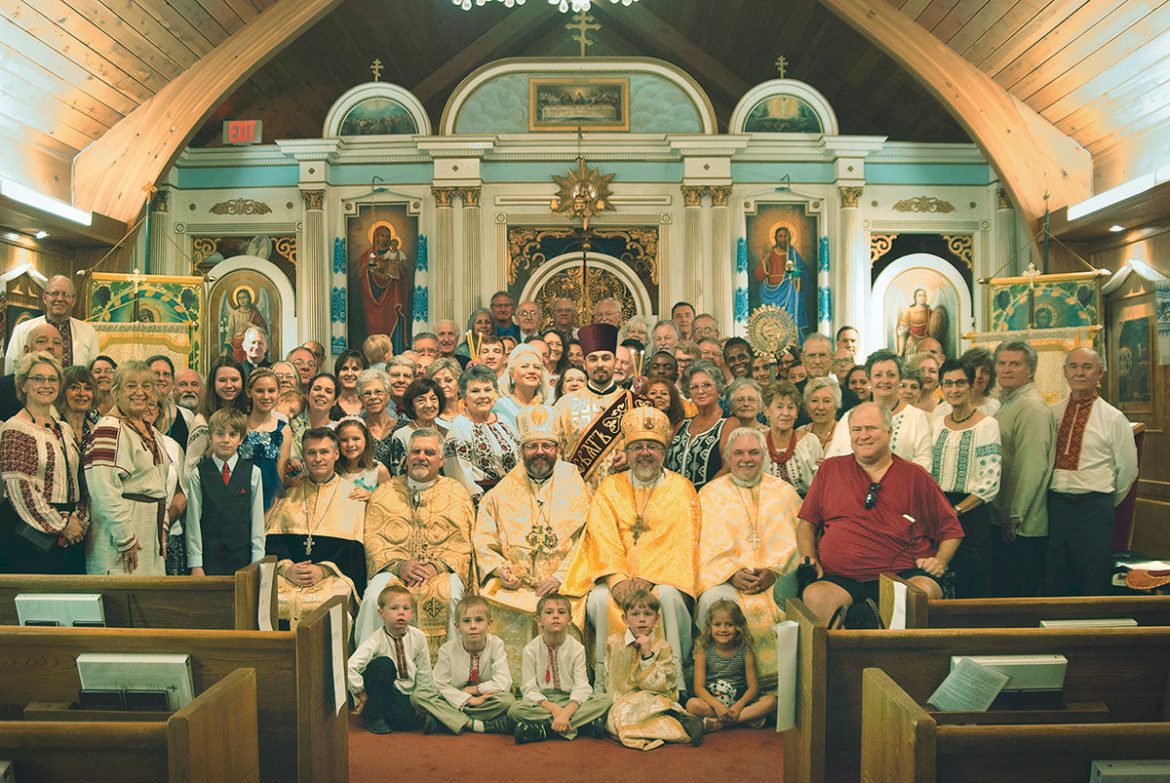 Parishioners and visitors crowd around Patriarch Sviatoslav to fix a moment in history at little St. Michael Ukrainian Greco-Catholic Church in Tucson, Ariz.

TUCSON, Ariz. – A day after installing Bishop Benedict Aleksiychuk as the new bishop of Chicago’s Ukrainian Catholic Eparchy of St. Nicholas, Patriarch Sviatoslav was off to visit one of the farthest parishes, located in Tucson, Ariz., of this vast eparchy.

Upon disembarking from a four-hour, nearly 2,000-mile flight to Tucson, the patriarch was moved by the dedication of a group of about a dozen stalwart parishioners singing “Mnohaya lita,” who waited in their Ukrainian embroidered clothing, with a large “Welcome, Patriarch” banner, despite the fact that the flight was two hours late, making it midnight at the time of arrival.

The next day, July 1, Patriarch Sviatoslav was greeted at the door of St. Michael Ukrainian Greco-Catholic Church with bread, salt and flowers by Pastoral Council Chair David Maciborski and Joanna Cole, president of the Sisterhood of Ss. Mary and Martha, as well as children of the parish.

After introductory prayers before the iconostasis, the patriarch was vested in the center of the church. This was a powerful moment that spoke to those present of the fact that the hierarch draws his strength from his people, just as they rely upon him, in a relationship of mutuality. Concelebrating with the primate were Father Andriy Chirovsky, pastor of St. Michael’s, Father Hugo Soutus, pastor of Dormition of the Mother of God Parish in Phoenix (the nearest parish  –– 125 miles away); Father Hanibal Soutus, brother of Father Hugo and an eminent canon lawyer; as well as the Rev. Dr. Gregory Zubacz from Fresno Pacific University in California, whose wife Melita Mudri-Zubacz and three daughters helped to sing the responses of the hierarchical liturgy.

Because Bishop Gerald Kicanas of the Roman Catholic Diocese of Tucson was spearheading a Catholic Relief services trip to Egypt, the diocese was represented by Msgr. Jeremiah McCarthy, vicar general, and Kathy Rhinehart, chancellor, with her husband, Richard. The Knights of Columbus escorted Patriarch Sviatoslav as a color guard.

Visitors from other churches in Tucson, from the Ukrainian community in Phoenix/Scottsdale, from San Diego and Fresno, California, came for the chance to meet Patriarch Sviatoslav. The church was full to the brim, and the congregational singing was full-bodied and joyful. Many remarked on the joyfulness of the occasion.

After the conclusion of the liturgy, people gathered at the front of the church for a historic photo.

Father Chirovsky introduced Patriarch Sviatoslav as a young priest with a pure heart who was his student during the summer program of the Metropolitan Andrey Sheptytsky Institute of Eastern Christian Studies in 1997 and whom he now recognizes as his own teacher.

Patriarch Sviatoslav made reference to this in his homily, claiming that he did not pass Father Chirovsky’s exam, although the pastor said he remembers things a little differently. The patriarch spoke about the importance of each of our names pronounced at Holy Communion, since these are the names of those inscribed in the book of Life.

He also referred to the Tucson community as gifted by God, necessitating that it keep sharing this gift, and held it up, little as it is, as an example of precisely what the Synod of Bishops meant when speaking of “The Vibrant Parish: A Place of Encounter with the Living Christ.” He emphasized that his own presence in Tucson was partly meant to send the signal that even the remotest parishes of the now global Ukrainian Greco-Catholic Church are not forgotten.

Afterwards, an informal, Southwest-style reception was held at the rectory, with a delicious barbecue and a relaxed, familial atmosphere in which parishioners and visitors could approach the patriarch and have the chance to converse with him and perhaps get a memorable snapshot taken.

Patriarch Sviatoslav vests in the midst of the congregation.

The following day, many from Tucson made their way to Phoenix for another hierarchical liturgy celebrated by Patriarch Sviatoslav, this one in observance of the 60th anniversary of the city’s Dormition of the Mother of God Parish. On Monday, July 3, Patriarch Sviatoslav travelled back to Kyiv.