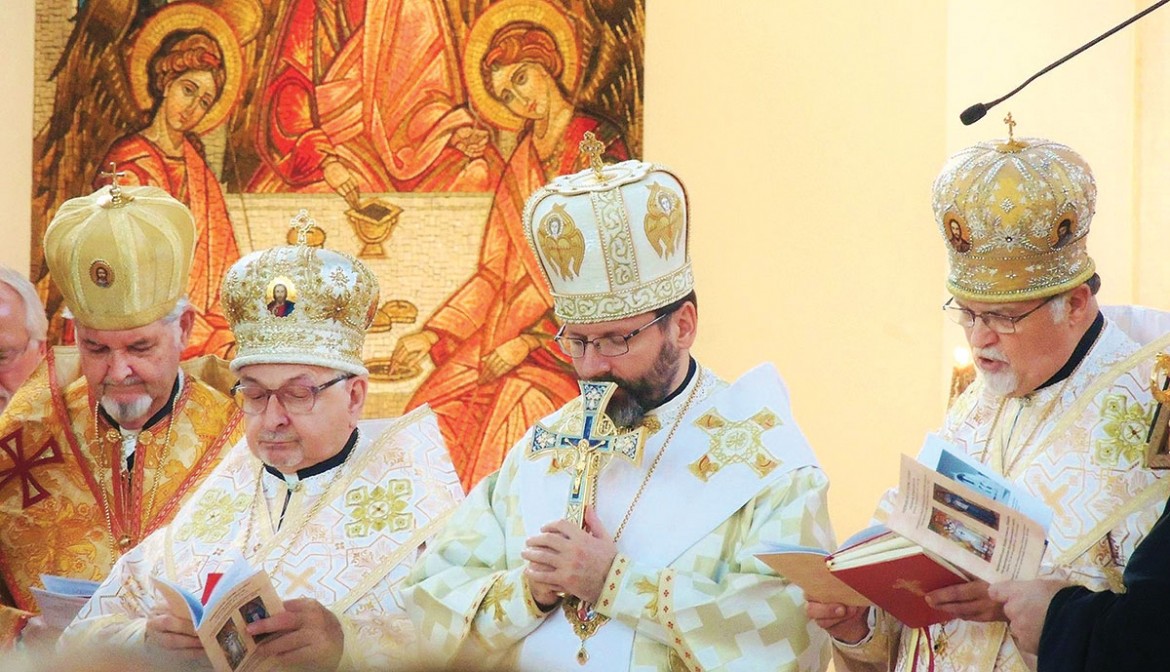 During his homily, Patriarch Sviatoslav reminded the faithful that God Himself becomes not only our neighbor, but He is with us, within us. Quoting St. Augustine, he said of God, “All the while You were more inside me than my most inmost part; You were higher than my highest powers… God is closer to us than we are to ourselves.” Continuing, he said love is the divine motion of us to God and God to us, the God we must love with all our heart, soul, mind and strength.

In honoring consecrated life, Patriarch Sviatoslav cited the life of the Venerable Servant of God Andrew Sheptytsky, who was declared heroic by Pope Francis on July 16 of this year. He called him the real image of the Good Shepherd, representing divine love in service and love for his people. Metropolitan Sheptytsky was the “unique Catholic hierarch in Europe who raised his voice, who defended and saved many Jews from the Holocaust at the time of World War II… Today, we venerate him as the one who led the renewal of monastic life in our Church.”

To the assembled religious men and religious women in consecrated life who renewed their vows during the divine liturgy, the patriarch said, “On behalf of the entire Ukrainian Catholic Church, I come to express our gratitude to you, brothers and sisters in Christ, who gave all your heart, and your soul, all your strength and all your mind to service and love for God. Thank you for your service to the Church, especially here in the United States. …And I call upon everyone here present to please learn how to love God and neighbor from our sisters here present.”

Newly installed mosaics of the Venerable Andrey and Blessed Sister Josaphata, designed by iconographer Chrystyna Dochwat, were blessed by Patriarch Sviatoslav at the end of the liturgy.

After Metropolitan Soroka thanked Patriarch Sviatoslav on behalf of all the clergy, religious and faithful for his pastoral visit and inspirational message, the patriarch presented a special medallion commemorating the 150th anniversary of the birth of Sheptytsky to Ms. Dochwat for her life’s work in designing liturgical appointments and church iconography that are found not only in the Immaculate Conception Cathedral in Philadelphia but in churches throughout the world.

After the recessional, the entire congregation carrying lit candles gathered outside on the cathedral grounds where Patriarch Sviatoslav blessed a new bell tower which houses the “Stefan” bell from the original cathedral which was cast in 1919 in Baltimore. Then the candlelight prayer vigil for Ukraine, with the entire congregation reciting Metropolitan Sheptytsky’s prayer for Ukraine concluded the services.

Over 1,200 faithful from parishes in eastern Pennsylvania, New Jersey, Delaware, the District of Columbia and Virginia attended the liturgy, which was broadcast live over the EWTN television network.

Responses to the liturgy were sung by the combined choir of parishioners of the Ukrainian Catholic Archeparchy of Philadelphia under the direction of the Rev. Paul Wolensky. The Fourth Degree Color Corps of the Knights of Columbus was provided by Archbishop Wood Assembly of Warminster, Pa.

A reception followed in the cathedral social hall, where the clergy, religious and faithful had an opportunity to personally greet Patriarch Sviatoslav.

The patriarch had begun this most recent visit to the United States by participating in the dedication and blessing on Saturday, November 7, of the Holodomor Memorial in Washington. The next day, he celebrated a special liturgy at Ukrainian National Shrine of the Holy Family in memory of the victims of the Holodomor.

While in Washington, he and other religious leaders from Ukraine met at the White House with representatives of President Barack Obama, asking for desperately needed humanitarian aid and support for the victims of the war in Ukraine and held a news conference at the National Press Club.

He also had an opportunity to visit with students and teachers in several of the Philadelphia Archeparchy’s parish schools.

In New Jersey, he visited with students and teachers at Assumption School In Perth Amboy and St. Nicholas School in Passaic. He also had an opportunity to visit the newly constructed churches of St. Stephen in Toms River and St. John the Baptist in Whippany.