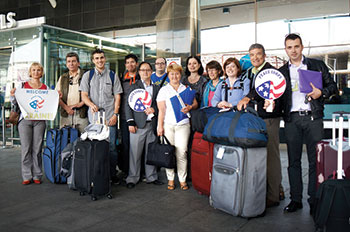 KYIV – American Peace Corps Volunteers are once again working side-by-side with Ukrainians. Seven volunteers returned to Ukraine on May 20 following a program suspension of more than one year due to the conflict in the east.

Indeed, many American Peace Corps Volunteers were so committed to their Ukrainian counterparts that they returned unofficially earlier this year to be part of the “new” Ukraine’s emphasis on strengthening English language skills, youth empowerment and civil society development. This group is the first of what is expected to be a steady stream of new volunteers arriving in the coming months.

Enthusiastic government and NGO partners lobbied for the resumption of the program at this unique time in Ukraine’s history when American know-how is especially welcomed.

Returning volunteer Paul Brunson, a native of Colorado and retired social worker, described his experience by saying “Ukrainians want to make a better country – and I want to help in that process, even in small ways. It’s like adding a drop of water to an empty glass. You don’t see a difference immediately. But eventually, the glass is full.”

More than 2,500 Americans have volunteered in Ukraine since 1992, when the program opened. Peace Corps Volunteers serve for two years in their communities and learn Ukrainian and Russian as part of their training. Skills transfer takes place at the grassroots level in rural and urban communities in partnership with the Ministry of Education and Science, Ministry of Youth and Sports, and Ministry of Economic Development and Trade.

The dream of President John F. Kennedy, Peace Corps remains a valuable component of ‘people-to-people’ bridge building between the United States and Ukraine.

Katie Ridinger of Kent, Ohio has been patiently waiting to return to the Ternopil orphanage where she was assigned in 2014. So intent on continuing with her work, she said “I dreamed about it and even spoke in Ukrainian in my dream!”

Ambassador Geoffrey Pyatt greeted the volunteers. He commented: “Ukrainians have been waiting a long time for this day. We celebrate the resumption of this important American program. Our American volunteers inspire Ukrainians and, in turn, show the people of Ukraine that we are supporting them not only at the national level but also in schools, youth centers and community organizations.”