WILMINGTON, Del. – Peter Serba, a loyal activist of the Ukrainian National Association and a branch secretary since 1954, passed away peacefully on the morning of September 12 at his home in Wilmington, Del. He was 96. 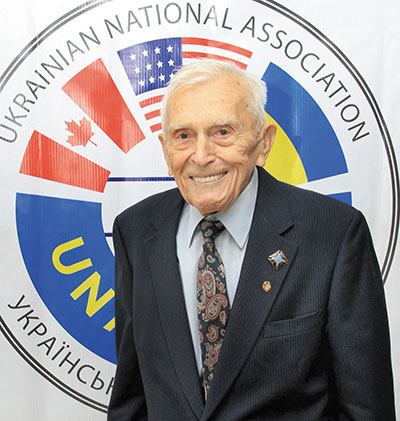 He was born on June 10, 1924, in Nakvasha/Mykyty in the Brody region of Ukraine. The youngest child of Josaphat and Maria Serba, he had one brother and two sisters.

In the midst of World War II, in 1942 and 1943, Mr. Serba completed specialized training to lead young forces against the enemies of Ukraine. A select few people were chosen from the Brody region for such responsibility. When the Russian front advanced, his forces were attached to what became the Ukrainian Insurgent Army (UPA), which fought the Russian Communist forces in that region of Ukraine. To avoid capture, Mr. Serba and another UPA member escaped via a nearly frozen river; Mr. Serba almost died during that episode, but survived after a lengthy recovery.

In 1944, Mr. Serba ended up in Slovakia in an effort to reconnect with the UPA, in whose ranks he continued to fight aggression on the part of both the Russian and the German forces during the second world war.

As the war ended and most young people were trying to recover, Mr. Serba wrote a letter home to his mother in Ukraine. She urged him to not come home for fear the Russians would either kill him, jail him or send him to a concentration camp in Siberia. Such was the fate that awaited all members of the UPA.

At the age of 22, Mr. Serba focused on the West and reached out to an uncle, also named Peter Serba, who had immigrated to the United States back in 1913. This was a man Mr. Serba knew only by name; the two had never met since the younger Peter Serba was born in 1924. His uncle wrote back, saying he would sponsor the younger Peter Serba’s immigration to America, but he needed to get to Germany.

It was not a simple matter for members of the UPA to immigrate to America. Once Mr. Serba made it to Regensburg, Germany, he feared repatriation to the Soviet Union. Despite many difficulties, in March 1949 Mr. Serba immigrated to the United States, settling in Wilmington, Del. He was most proud to become a U.S. citizen in 1951.

Mr. Serba gravitated toward St. Nicholas Ukrainian Catholic Church in Wilmington. In 1954, he married Irene née Malanchuk, and they had one son, Eugene, born in 1955. Mrs. Serba passed away in 2004.

Mr. Serba was an active member of the Ukrainian National Association and served as secretary of UNA Branch 173 since 1954. He was a delegate to every quadrennial UNA convention since 1958 and proudly signed up over 400 UNA members. He enrolled four generations of his family into the UNA; all are members of Branch 173.

He was honored for his more than 64 years of service to the UNA in 2018, at the organization’s most recent convention, where he was also the oldest delegate. At that convention his son Eugene Serba, previously a UNA auditor and prior to that a UNA advisor, was elected as the UNA’s second vice-president.

During the 2018 convention, speaking with Matthew Dubas of The Ukrainian Weekly, Peter Serba said: “I look forward to the reforms the UNA will enact in order to attract young members and new blood into the organization. … I hope to be here and continue to work with the UNA for as long as I am able.”

Mr. Serba worked as a professional tailor into his retirement years and was active in a number of other Ukrainian organizations, including the United Ukrainian American Relief Committee (UUARC). He especially enjoyed working around the house or spending summers in North Wildwood, N.J., on the beach.

Mr. Serba spoke proudly of his service in the Ukrainian Insurgent Army in defense of his homeland, and he would often point out that he was amazed he had been able to survive as long as he had, given his serious wounds during World War II.

Mr. Serba was especially proud when his son, Eugene, received his B.S. from Wake Forest University and his M.B.A. from Drexel University. He was equally proud of his grandchildren: Dr. Diana Zetterstrom (with husband Paul from Cranford, N.J.), who graduated from Rutgers University and Temple University; and Gregory Serba (with wife Julie from Hillsborough, N.J.), a graduate of Virginia Tech and the University of North Carolina Chapel Hill.

Mr. Serba first returned to Ukraine 50 years after he had left the country, in 1992, and then again in 2004 for an UPA gathering in Kyiv and in 2007. He was extremely proud of his Ukrainian heritage, but just as proud to be an American. All who knew him described him as a true gentleman.