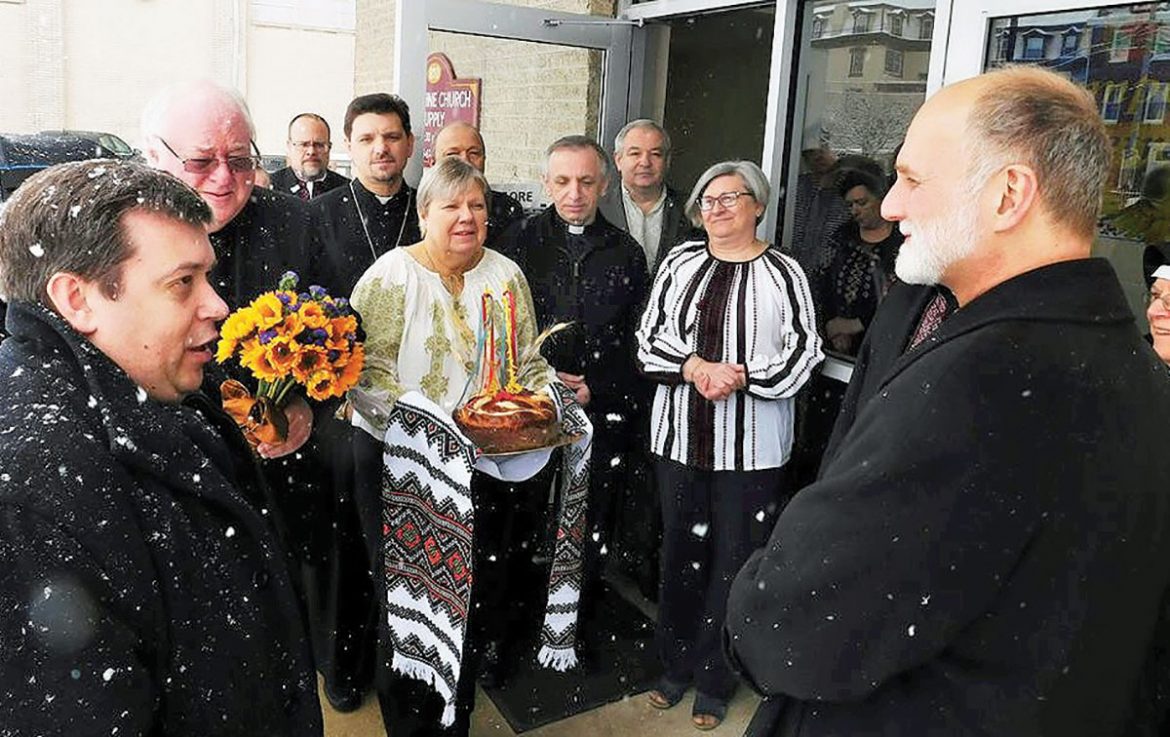 Metropolitan-Archbishop-elect Borys Gudziak is welcomed to Philadelphia by the Chancery staff of the Ukrainian Catholic Archeparchy.

PHILADELPHIA – Friday morning, March 1, while a graceful cascade of white snowflakes gently fell to the ground, the Chancery staff of the Ukrainian Catholic Archeparchy welcomed the Metropolitan-Archbishop-elect Borys Gudziak to the archieparchial pastoral center.

Standing in front of a banner reading, “Welcome, Metropolitan Borys” in both English and Ukrainian, featuring the Ukrainian colors of blue and gold, Bishop Andriy Rabiy offered a warm welcome to Archbishop Borys, as he was presented with the traditional greeting of bread and salt and a bouquet of sunflowers.

After the welcome, Archbishop Borys met with the staff in the Chancery conference room for an informal get-together. During this time, he briefly shared his goals for the archeparchy and also asked the staff members for their prayers and to express what their expectations were of him: “What do you need of your new archbishop? What type of archbishop do you want?”

Some of his thoughts included how he wanted to lead the archeparchy as a spiritual brother, father and shepherd, who would inspire the presbyterate, the religious and the laity, the entire archeparchy, to grow in their relationship to Christ.

He emphasized: “I want to be a good listener and I ask you to be my teachers.”

Archbishop Borys reflected on two qualities his mother sought to impress upon him and instill in him – kindness and gentleness – character traits that he hopes can be shared in his relationships with the clergy, religious and laity.