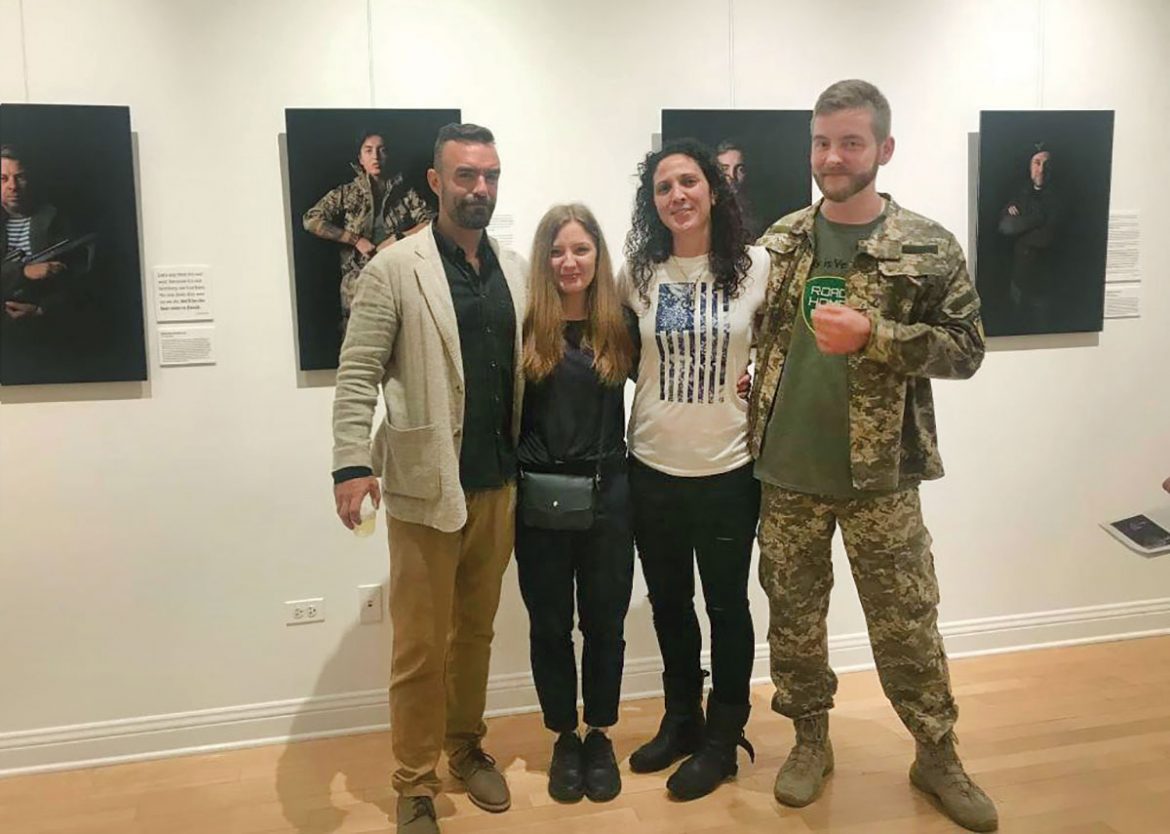 At the exhibit (from left) are: Dylan Tete, Alina Viatina, Jenn Blatty and Dmytro Lavrenchuk.

CHICAGO – The Ukrainian National Museum in Chicago currently has the honor of hosting an extraordinary exhibit of photographs from Ukraine’s Donbas. The exhibit, “Frontline, Peace Life: Ukraine’s Revolutionaries of the Forgotten War” opened on May 31 and will run through June 23.

The exhibit documents an ongoing project by U.S. Army combat veteran (Iraq and Afghanistan) and West Point graduate Jenn Blatty. She has been photographing and conducting oral history recordings of volunteer soldiers both on the front and after their return home to what the soldiers have termed the “peace life.” Ms. Blatty, along with her colleague and fellow U.S. veteran Dylan Tete plan to bring their exhibit to other Ukrainian communities in the U.S.

Though she has no ties to Ukraine and knew little about the country when she first became aware of Ukraine’s war, Ms. Blatty traveled there in 2018. As only a fellow soldier can, she quickly found a “commonality that transcends the boundaries of nation and conflict” with the many soldiers and veterans she immediately bonded with.

Ms Blatty noted: “My work in Ukraine is about building connections between U.S. and Ukrainian veterans. My hope is when those who served in Iraq and Afghanistan look at these portraits, they also see a bit of themselves and think, ‘there is a global community of warriors who have fought and continue fighting for life and liberty, and I belong to that community too.’”

It was thus very moving to meet two Ukrainian veterans, Dmytro Lavrenchuk and Alina Viatina, at the opening. They accompanied Ms. Blatty and Mr. Tete, and shared their stories with exhibit attendees, including a group of Ukrainian American veterans of the U.S. military.

This exhibit features numerous haunting, beautifully composed portraits of soldiers Ms. Blatty has come to know and whose stories she has documented. It reminds us that the war continues, that soldiers and civilians are still dying every day and that Ukraine still needs our strong, unwavering support. Projects such as this are a critical part of this effort as they focus the attention of our Ukrainian communities while also informing the wider American audience.

For more information on Ms. Blatty’s project and to donate, please visit www.jtblatty.com.

Alina Viatina and Dmytro Lavrenchuk in front of their respective portraits.