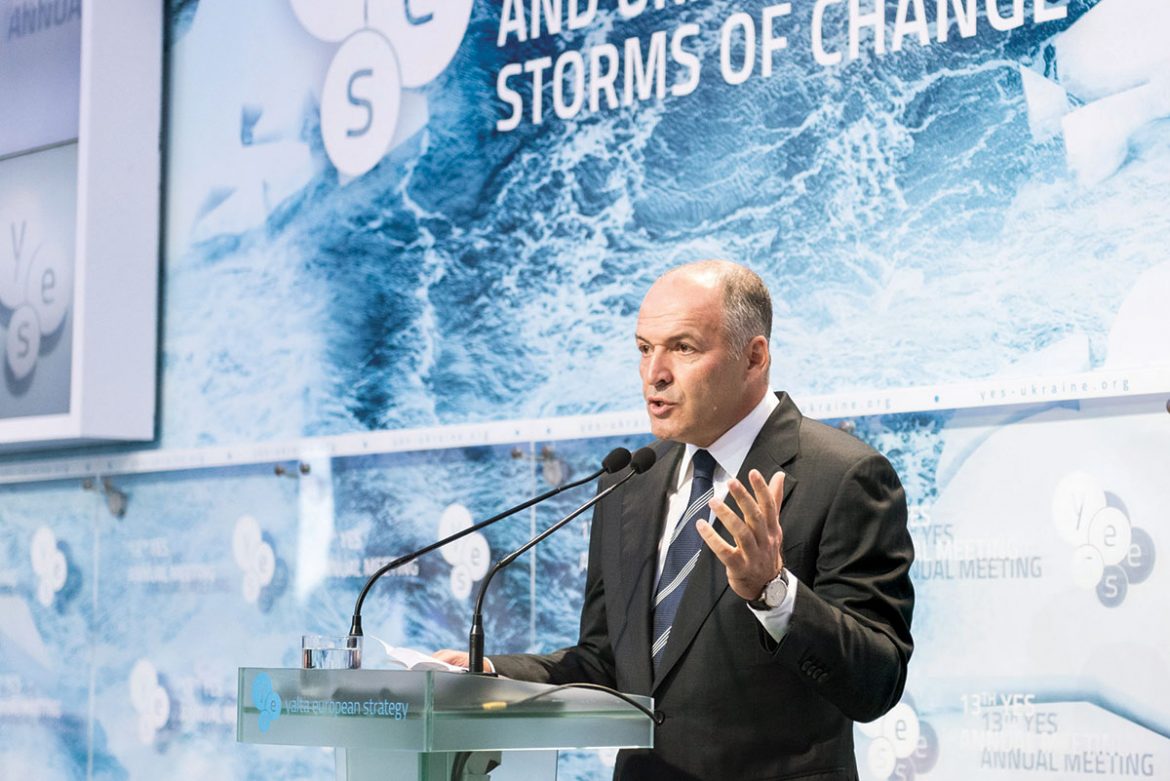 KYIV – Victor Pinchuk, the billionaire tycoon known for staging Ukraine’s premiere gathering of leaders and thinkers on Ukraine’s European future, drew criticism for suggesting that his country shelve integration with the continent and temporarily sacrifice Crimea in exchange for peace with Russia. He did so in an opinion piece published in the Wall Street Journal on December 29.

On the commentary titled “Ukraine must make painful compromises for peace with Russia,” Mr. Pinchuk, 56, said that “Ukraine should give up the idea of European Union membership,” including NATO, and that “Crimea is Ukraine, but this position should not be an obstacle on the way of returning Donbas.”

He furthermore advocated for holding local elections in the Russia-occupied Donbas even though there won’t be “conditions for fair elections until Ukraine has full control over its territory.”

For years an advocate for closer ties with the 28-nation European Union, Mr. Pinchuk’s article came exactly three weeks before he holds the Davos Ukrainian Breakfast at the World Economic Forum in Switzerland on January 19. CNN journalist Fareed Zakaria is scheduled to moderate a discussion on Ukraine’s future in a “changing world” between former British Prime Minister David Cameron and Ivanna Klympush-Tsintsadze, Ukraine’s vice prime minister for European and Euro-Atlantic integration.

“The president will have his own program in Davos, but after the [Pinchuk] article, he will not go to Pinchuk,” the source told lb.ua.

However, Mr. Pinchuk’s tone of appeasement, according to detractors, elicited criticism from the president’s office, among lawmakers and foreign think tanks.

Regarding the Donbas and Crimea, two territories over which Ukraine has sovereignty, Mr. Yelisieiev said they shouldn’t be swapped.

“These territories cannot be part of a trade-off for peace. They belong to Ukraine, and this is confirmed internationally – including by the U.N. General Assembly Resolution on Crimea last month [December] and by the Office of the Prosecutor of the International Criminal Court in November. Ukraine will never abandon the Ukrainians who were trapped behind the Iron Curtain of Russia’s military invasion in Crimea and Donbas,” he said.

Regarding the idea of holding local elections in the Donbas while it is still occupied, Hanna Hopko, the head of the Verkhovna Rada’s Foreign Affairs Committee, said that, even if a compromise with Russia was on the table, it should have been backed by rebuilding trust.

“Russian troops leaving the Donbas and giving Ukraine control over its borders back would be a first step. Any elections on the occupied territories are not possible until these conditions are fulfilled,” Ms. Hopko noted.

“In substance,” Mr. Pinchuk’s proposals “suffer from the very flaw that dogs all such ideas: they are unworkable,” Mr. Sherr said. “If temporary arrangements are instituted to end a confrontation, how can they be terminated without relaunching it? Once agreed, such arrangements create a new reality.”

The expert explained: “They sap existing relationships (Ukraine-EU, Ukraine-NATO) of their vitality, substance and much of their purpose. They also create a new dynamic which Russia can be expected to use in order to secure Ukraine’s subordination, first de facto and then de jure. There is no reason to think that any unilateral concession offered will deflect Russia from these ends, which it pursued doggedly even when Ukraine was a ‘non-bloc’ (i.e. non-aligned) state.”

Regarding elections in the Donbas, Mr. Sherr said that, “like agreements, elections confer legitimacy, but they should never do so under occupation by brigands or foreign armies.”

Mr. Pinchuk amassed most of his fortune during the presidency of his father-in-law, Leonid Kuchma, in 1994-2005. He controls East One Group, an investment advisory group that manages his company Interpipe, a producer of steel pipes and rail wheels, as well as Credit Dnipro Bank, the country’s 21st largest bank with $300 million in assets. An energy-efficient electric steel mill commissioned in 2012 also belongs to Mr. Pinchuk.

Because of the nature of his steel-producing business, Mr. Pinchuk has longstanding ties with Russia, but he has virtually stopped exporting to Russia because of restrictive measures the country has imposed and low demand.

While Interpipe once delivered 350,000 tons of steel pipes monthly to Russia, according to company economy and finance director Denis Morozov, it now sends 30,000 to 35,000 tons per month.

Interpipe is currently in default of its Eurobonds that mature in 2017, and saw its share of pipe exports to Russia plunge to 10 percent in 2015 from 27 percent the previous year. Over all in 2015, pipe and train wheel production at the company decreased by 29 percent to 600,000 tons.

Mr. Pinchuk, whose net worth is $1.49 billion according to Forbes, is also a generous philanthropist who has held the yearly Yalta European Strategy discussion that brings in world leaders and opinion-makers to Ukraine to discuss the nation’s place in Europe. He also runs a foundation that helps baby clinics and was the first Ukrainian to pledge half or more his fortune to philanthropic causes through an initiative founded in 2010 by Bill Gates and Warren Buffett.

He was the single largest outside donor to U.S. President-elect Donald Trump’s private charity in 2015. His $150,000 donation accounted for 20 percent of the foundation’s donations that year, according to IRS filings.

Mr. Trump that year made a short video for the mogul’s YES conference held in Kyiv during which the American presidential candidate then said Ukraine wasn’t getting enough attention on the world stage.

The Clinton Foundation also benefited from Mr. Pinchuk’s largesse, receiving between $10 million and $25 million from him through the years, according to The New York Times.