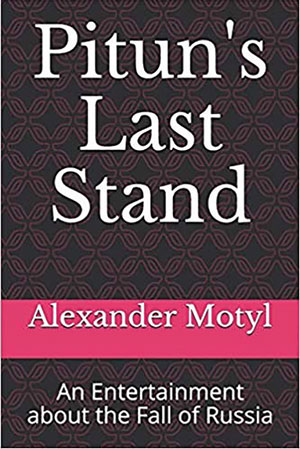 “Pitun’s Last Stand: An Entertainment about the Fall of Russia,” by Alexander Motyl.

In times of domestic troubles, imperial Russia and its successor state have been prone to provoke “little victorious wars,” which often ended with disastrous consequences both for the leader and the state. It is this type of misadventure that provides the opening act for Alexander Motyl’s 11th quick-paced, engrossing and highly entertaining novel, “Pitun’s Last Stand.”

In this instance, the target of invasion chosen by Russia’s swashbuckling, macho President Vladimir Pitun is the country’s diminutive, western neighbor Estonia. But as has been the case in the past, instead of the anticipated quick victory, the invasion triggers a series of uprisings throughout the multinational Federal Republic as well as retaliatory action by Russia’s immediate neighbors. Within a few pages of the first chapter, the sprawling federation is falling apart while chaos rages in Moscow. To those who see the destruction of revered monuments, indiscriminate looting and wanton carnage in the capital as the end of Russia, suicide or flight abroad seem to be the only options. For, as one of the few Russian patriots portrayed in the story gloomily observes, “Who believes in Pitun and the Russia he created? Only idiots and criminals. Who will die for such a monstrosity?”

Sensing that his ill-chosen adventure may bring the end to his rule, the distraught Pitun reaches out for what appears to be the last straw: support from well-to-do patriotic Russians residing abroad. A hastily prepared rescue mission with this objective takes the Russian dictator and a number of his cronies to Nice, a favorite vacationing spot of wealthy Russians since the time of the tsars. Thus, the dark scenes of destruction and carnage, depicted with graphic, masterly strokes in the first chapter, give way to a tranquil atmosphere of a sunny Mediterranean port on the French Riviera. In fact, most of the action that follows takes place either in the salubrious atmosphere of Nice or on a luxurious, Orient-like express carrying Pitun and his coterie of Russian and foreign supporters back home to St. Petersburg.

What makes the story especially appealing is that, the book’s title notwithstanding, the main character of the novel is not the vapid, fish-eyed figure of Vladimir Pitun, but a bright, Yale-educated American journalist, Steven Smith, dispatched by his New York-based newspaper to cover Russia’s invasion of northern Estonia. Learning upon his arrival that Pitun’s grand plan miserably misfired, Steve promptly hastens to Moscow to become the chronicler of what his pessimistic Russian acquaintances view as the end of the motherland.

Steve’s grueling adventure in revolutionary Russia calls for a well-deserved respite and what could have been more appealing to a well-traveled foreign correspondent than the peaceful atmosphere of the Riviera! His companion during this detour from official duties is a savvy British fellow journalist by the name of Pipa Tumbleth­waite, who could not resist the opportunity to relax in scenic Nice in the company of an intelligent American colleague.

Being true to their profession even during times of play and pleasure, it does not take long for the journalistic duo to spot at the roulette table in a plush hotel a heavily disguised but, to Pippa’s alert eye, readily recognizable figure of Vladimir Pitun. After ascertaining that it was indeed the Russian dictator, Steve forgets about his fatigue caused by the harrowing Moscow experience, and proceeds to engineer an interview with the Russian leader, an endeavor with Pippa’s assistance that proves inordinately successful.

The encounter with two well-known, Western journalists – in the course of which Steve suggests that Pitun follow Lenin’s example by taking a train on his return trip to Russia – sounded so pleasing to the narcissistic Russian leader, that both Steve and Pippa are invited to cover his triumphant return to St. Petersburg, an offer which no journalist with ambition could resist.

With French assistance, the preparations for the triumphant return journey are executed at top speed so that within a day or two, a group of passengers, mainly loyal Russians and wealthy foreigners, are boarding a deluxe express. Once the train begins moving, Pitun and his entourage recede into the background, and the focus of the story once again centers on the journalistic duo and a colorful American couple, an oil tycoon from Texas by the name of Bobby Lee and his good-natured, loquacious wife Ladybird, whom Steve and Pippa befriend during the trip. The couple’s presence adds a light, but at times intriguing, touch to the intricate plot of this fast-moving story. What role will this quartet of English speakers play in the events that lead to Pitun’s last stand will be revealed at the end of the story.

Alexander Motyl is not only a prolific fiction writer, but a well-known scholar – according to Academic Influence he is ranked sixth among the “Top Ten Most Influential Political Scientists Today.” The scenes he paints and the diverse characters he portrays in the story appear credible and real because the author has a solid background in Soviet studies acquired in the course of many years in an ivy-league academic setting.

Of course, Mr. Motyl is not the first specialist in his field who has given some thought to the idea of Russia’s demise. Sixty-five years ago, in a guest lecture at Columbia University, one of the top specialists in Russian history, Richard Pipes, predicted that when the Soviet Union collapses, it would disintegrate at its national seams. This is exactly what happened 25 years later! In Mr. Motyl’s vision, once again, the non-Russians play the central role in the destruction of what has remained of the once mighty and proud imperial power.

Is a similar event likely to happen in today’s Russia? Most specialists in our time would be reluctant to estimate to what degree years of corruption and misrule have eroded the sense of national pride and dignity among patriotic Russians. One could wonder, however, whether individuals who are somewhat less pessimistic among them than the characters we meet in the novel might not be willing to rally around a discredited but experienced and clever leader like Pitun, or to answer a call of a man on a white horse like the novel’s enigmatic General Fedotov, who claims to have the atomic weapons under his control. The scenario at the end of the Russian civil war exactly a century ago, when patriotic White Russian officers were joining the Bolsheviks “because they were reuniting imperial Russia,” might once again repeat itself.

Throughout the narrative whether in Lithuania, Russia or on the French Riviera, the novel provides adventure and light entertainment for the general reader as well as food for thought for the well informed. It will be enjoyable to both.
“Pitun’s Last Stand” is available on Amazon in both electronic and paperback formats.

Anna Procyk is an author and professor emerita in the Department of History, Philosophy and Political Science at Kingsborough Community College of the City University of New York.