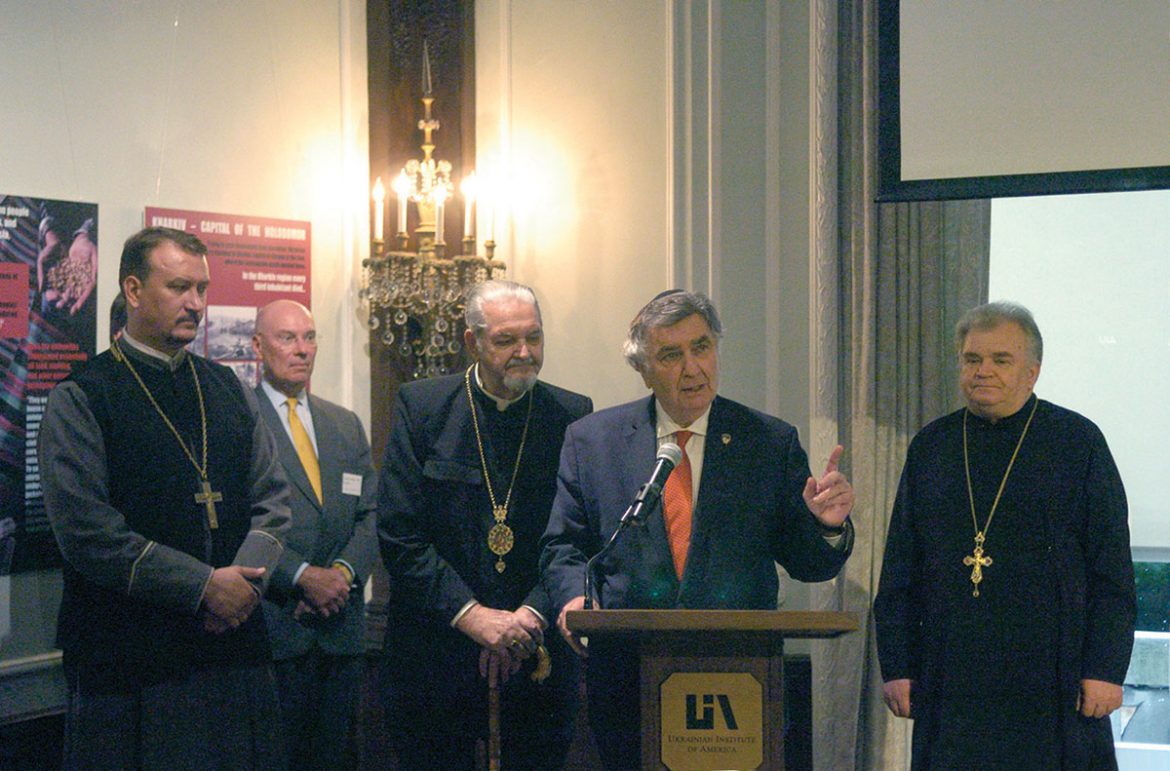 Prayers are offered at the unveiling of a plaque honoring Dr. Raphael Lemkin. At the podium is Rabbi Joseph Potasnik; with him (from left) are the Rev. Vitaliy Pavlykivskiy, Dr. Daniel Swistel, president of the Ukrainian Institute of America, Bishop Emeritus Basil Losten and the Rev. Volodymyr Muzychka.

NEW YORK – Back on September 20, 1953, at the Manhattan Center on West 34th Street, an overflow crowd of 3,000 cheered an impassioned speech by Dr. Raphael Lemkin that detailed the Holodomor of 1932-1933. He called it a calculated Soviet attempt to destroy Ukrainian identity and the entire Ukrainian nation, adding this was not simply a horrendous mass murder, but a genocide – part of the Soviets’ larger plan to get rid of the “Ukrainian problem.” A report on his speech made the front page in The Ukrainian Weekly. (The Weekly’s editorial from September 16 of this year analyzed the significance and resonance of this event.)

Exactly 65 years later, on September 20, the Ukrainian Institute of America in New York (UIA) hosted a ceremonial unveiling of a bronze plaque commemorating Dr. Lemkin, a lawyer and internationally renowned jurist who devoted his life to the study of crimes violating international law. He collected troves of relevant documents and coined the term “genocide,” becoming an expert in crimes against humanity and an influential advisor at the Nuremberg Trials and later at the United Nations, where the Convention on Prevention and Punishment of the Crime of Genocide was adopted in 1948. 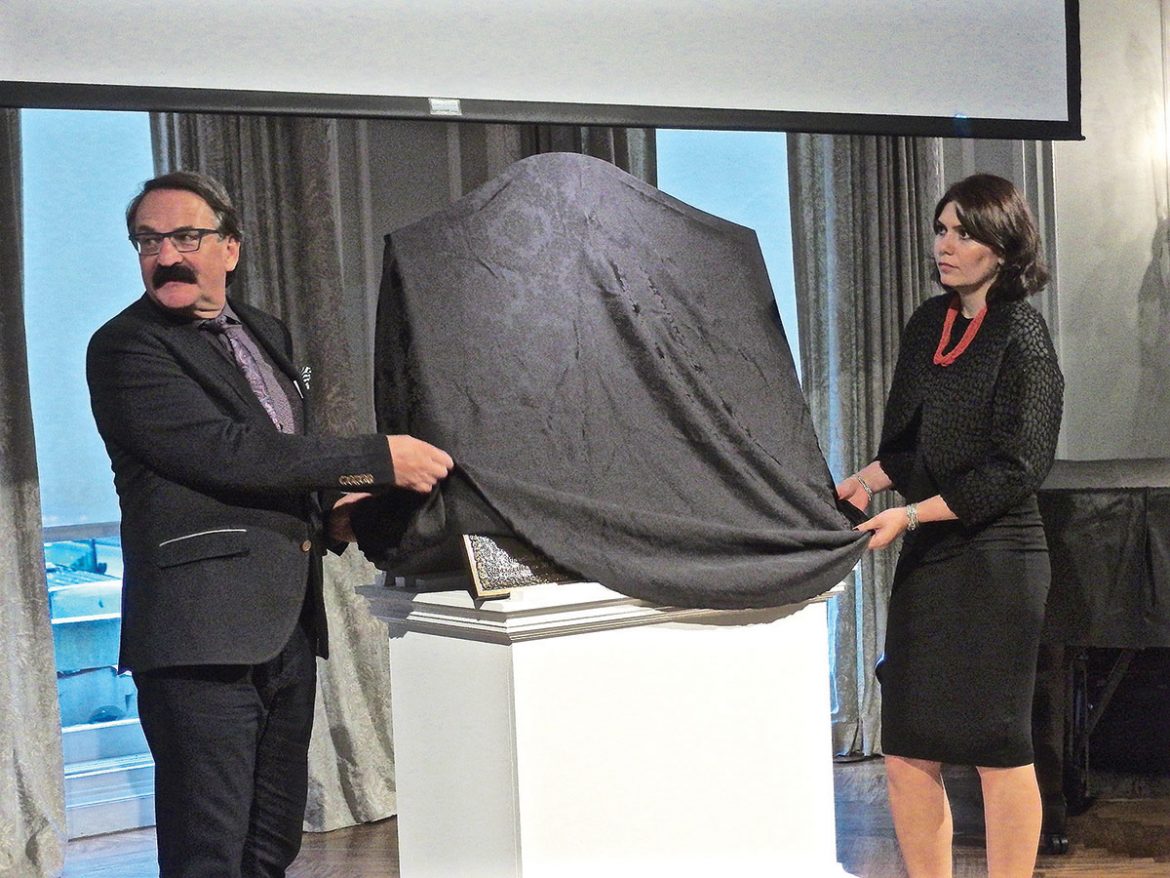 To commemorate this important man, the Ukrainian Canadian Civil Liberties Foundation in collaboration with the UIA had launched a campaign to commission the bronze likeness of Dr. Lemkin (sculpted by Oleh Lesiuk) on a quadrilingual – English, Ukrainian, Hebrew and Yiddish – plaque, to be permanently displayed at the UIA.

The inscription under his image reads: “Dr. Raphael Lemkin and the Holodomor. This plaque honours Dr. Raphael Lemkin (1900-1959) ‘The father of the Genocide Convention.’ In a 1935 speech delivered in New York City, Dr. Lemkin described the Great Famine of 1932-1933 in Soviet Ukraine (the Holodomor) as ‘a classic example of a Soviet genocide.’ This memorial also hallows the many millions of Ukrainians who were murdered by starvation during the Holodomor, one of the greatest genocides to befoul 20th century European history.”

Dedication prayers were voiced by Bishop Emeritus Basil Losten of the Ukrainian Catholic Eparchy of Stamford, Conn.; Rabbi Joseph Potasnik, executive vice-president of the New York Board of Rabbis; the Rev. Volodymyr Muzychka, pastor of the Ukrainian Orthodox Cathedral of St. Volodymyr in New York; and the Rev. Vitaliy Pavlykivskiy, pastor of All Saints Ukrainian Orthodox Church in New York.

UIA President Daniel Swistel, M.D., welcomed the large audience in attendance for the unveiling, mentioning how as a little boy he had heard his mother recalling the Holodomor. 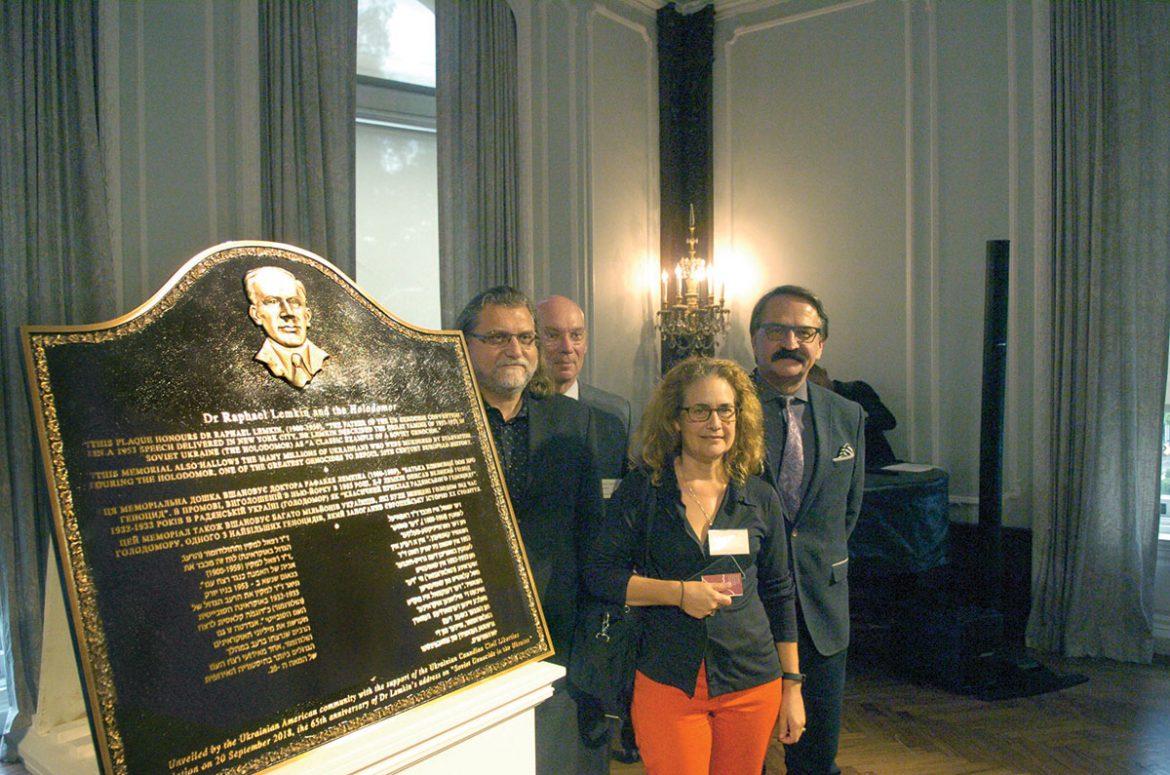 The first speaker was Lubomyr Luciuk, professor at the Royal Military College in Kingston, Ontario. According to Dr. Luciuk, this commemorative ceremony was significant because, forgotten for many years, the Holodomor still is not recognized as genocide by most countries. In his opinion, this silence stems from “Western complicity in covering up the Holodomor.” Dr. Luciuk related how the British Embassy had recorded a conversation in 1933 with Moscow correspondent Walter Duranty of The New York Times in which Duranty admitted to 10 million Ukrainian victims.

Dr. Luciuk also described the problems encountered in unearthing Dr. Lemkin’s 1953 speech from the archives of the New York Public Library. Yet more problems surfaced in the transfer of the commemorative bronze plaque from the casting foundry in Pittsburgh – it was finally delivered just one day before the unveiling.

In a conversation with this author, Dr. Luciuk revealed that the principal financial support for the plaque came from Mr. Ihnatowycz, the noted Ukrainian Canadian philanthropist who also financed last year’s film “Bitter Harvest.” Many individual Ukrainians and Jews also contributed to this project.

The following speaker, Ukraine’s consul general in New York, Oleksii Holubov, added that “without understanding the nature of the Holodomor, we cannot understand the nature of relations between Russia and Ukraine.” Mr. Holubov also read a statement from Ukraine’s Ambassador to the U.S. Valeriy Chaly.

The audience next saw a video of Samantha Power, former U.S. ambassador to the United Nations. Ms. Power recounted her years of studying Lemkin’s ideas, especially his warnings about complete destruction of cultures, adding that “Dr. Lemkin dedicated his strength to helping others, and so few people came to his funeral [1959] that this memorial was necessary and long overdue.” Ambassador Power concluded by saying that she looks forward to visiting the UIA.

A singular part of the program was New York playwright Catherine Filloux reading excerpts from her 2005 play “Lemkin’s House.” These were absorbing meditations on Lemkin conversing in the after-life with his mother. 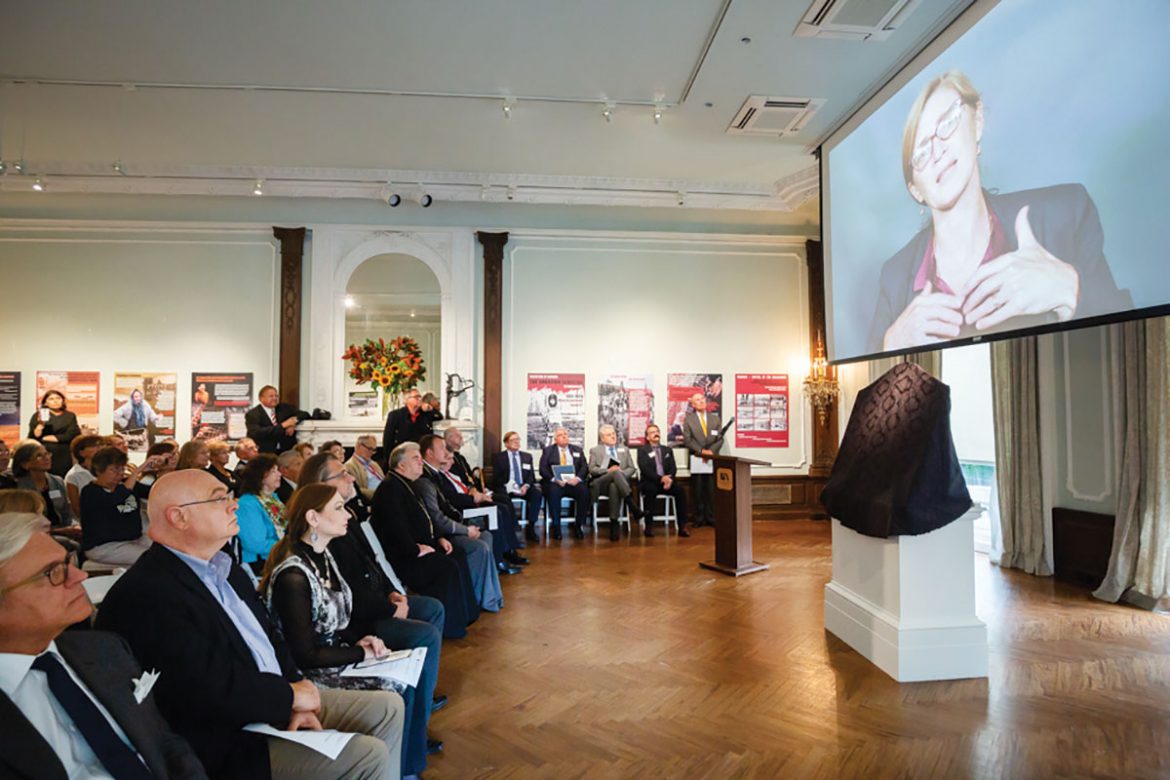 The final speaker was former U.S. Ambassador-at Large for War Crimes Issues David Scheffer. Dr. Scheffer declared that the Holodomor was a “direct assault on the Ukrainian people.” He spoke about related genocides in the Sudan and Cambodia, and said that the Holodomor is currently in “preliminary consideration” for genocide at the International Criminal Court in the Hague, Netherlands.

Dr. Luciuk added that the Ukrainian Institute of America had placed flowers that same day at the grave of Dr. Lemkin in Queens to “thank a righteous man!”

Dr. Lemkin was born in 1900 in what is now Belarus. Homeschooled, he was fascinated by mass atrocities and often questioned his highly intelligent mother about the Sack of Cartage, Mongol Invasions and the persecution of the Huguenots. This became the central concern of his life. During World War I, his family was compelled to bury books and valuables, and hide in a nearby forest.

Dr. Lemkin studied linguistics at Lviv University (eventually becoming fluent in nine languages). Moved by the wartime massacres of Assyrians, Greeks and Armenians by the Ottoman Turks, he traveled to Germany to study philosophy. He returned to Lviv in 1923 and earned his law degree. Later, he served as prosecutor throughout Poland and Ukraine, and also lectured at numerous universities.

Dr. Lemkin’s broader study of accountability for genocide led to his convincing analysis of the Ukrainian Great Famine and the Soviets’ associated destruction of the intelligentsia and clergy, all cultural and political leaders and forced population transfers. This culminated in his historic declaration that the Holodomor was nothing less than a “classic example of Soviet genocide.”