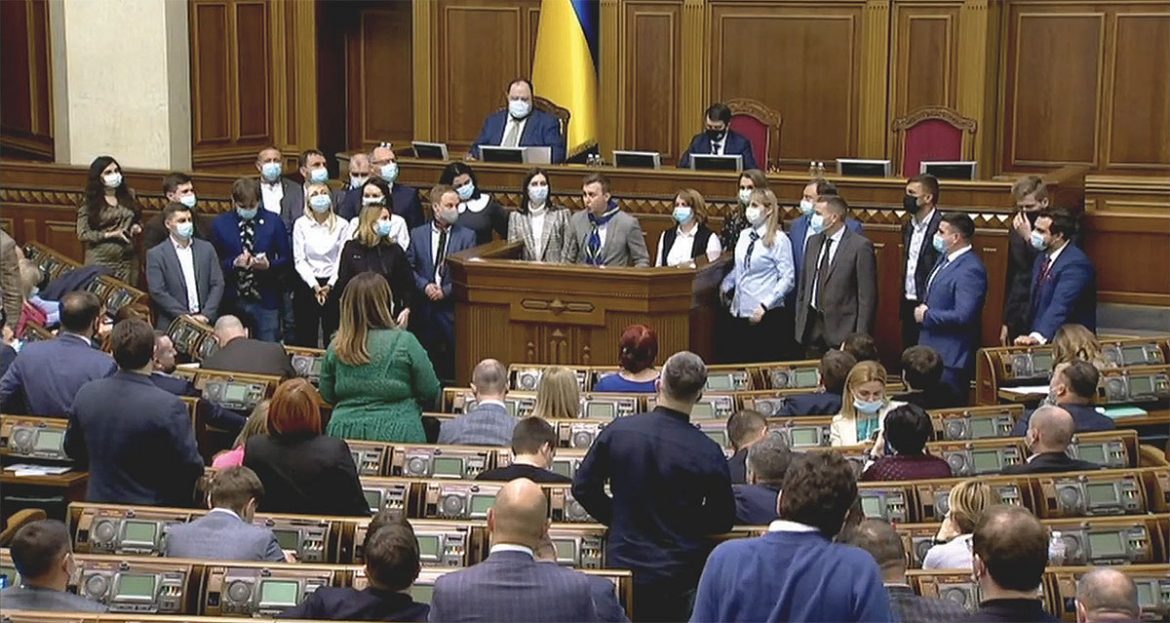 Members of the inter-factional parliamentary caucus Plast congratulate the organization on its 109th anniversary.

KYIV – For the second year in a row, the Plast Ukrainian Scouting Organizat­ion marked the anniversary of its founding on April 12 online due to pandemic restrictions. While many of the commemorations took place virtually, members of the Ukrainian parliament from the inter-factional caucus “Plast” gathered in the Verkhovna Rada to congratulate the organization on its 109th anniversary during a plenary session the following day.

“Today, together with the people’s deputies, we want to greet you with the scouting call S.K.O.B. – strong, beautiful, careful, fast,” said Roman Lozynskyi, a member of parliament from the Holos faction who heads the inter-factional caucus established to support the Plast organization in Ukraine.

“Yesterday marked the 109th anniversary of the first Plast oath. For more than 100 years, Liubomyr Huzar, Bohdan Hawr­ylyshyn, Stepan Bandera, Kvitka Tsisyk, Roman Shukhevych, and many other prominent figures of our country became alumni of Plast. They showed with their lives how loyal they are to our country,” Mr. Lozynskyi said during a speech in parliament.

Mr. Lozynskyi stressed that Plast’s guiding principles can help Ukraine further develop as a democratic country and they are instrumental in helping the country secure its future as an independent, sovereign nation.

“Bohdan Hawrylyshyn has repeatedly said that ‘if Ukraine had half a million Plast members, it would not need to worry about its future because fidelity to God and Ukraine, helping others, and self-improvement are fundamental values that Plast has invariably nurtured in Ukrainian youth since the beginning of the 20th century,’” Mr. Lozynskyi said, referring to the prominent economist who was a fellow and member of the board of the World Academy of Art and Science.

“If Ukraine had taken the example of other progressive states and supported Ukrainian scouting since independence, we would hardly have the occupied territories of Donbas and Crimea today,” Mr. Lozynskyi said.

Surrounded by dozens of other deputies who support Plast in the Verkhovna Rada, Mr. Lozynskyi said that, while it has taken some time to gain traction in Ukraine, Plast has continued to grow. It has also recently received more support from the government in the country.

“Better late than never. And today, we, Plast members and friends of Plast in the Verkhovna Rada, want to thank this convocation of the parliament for the law adopted in December 2019 on the support of the Plast movement in Ukraine,” Mr. Lozynskyi said.

“Today, the Plast movement is 10,000 Plast members and more than 2,000 adult volunteers who dedicate their free time and desire to work with Ukrainian youth every day. And we call on the entire parliament and the government to continue to support the largest youth movement in Ukraine, Plast.”

In a sign of that growth and support, on April 13 two additional members of parliament, Olha Stefanyshyna and Oleksandra Ustinova, filled out applications to join Plast. Proud of the step they had taken, each posted their completed application on Facebook.

Later that day, Plast members had a chance to join a virtual tour of parliament, continuing a tradition of official events in the Verkhovna Rada that annually honor Plast. The pandemic restrictions stopped the practice from proceeding offline, but members of parliament made it possible via video conference. All participants joined the tour wearing their Plast uniforms.

As a result of the ongoing pandemic, celebrations of Plast’s 109th anniversary were also held virtually. More than 10,000 people from seven countries joined a seven-hour broadcast via the Internet. The two largest branches of Plast in Ukraine – Kyiv and Lviv – organized the program, while some 20 volunteers cooperated to run the event.

Plast members were greeted by a member of the organization’s leadership, Roman Oryshchenko, who is currently defending Ukraine and is stationed along the contact line in the east of the country. Mr. Oryshchenko conveyed his message via a live video stream from the Donetsk region.

Anna Bondarenko, the event’s coordinator who is a member of the organization’s Kyiv branch, noted the difficulty of planning this year’s celebration.

“We started with a plan for the festivities that would observe the quarantine restrictions, then we had to go online, and a week before we united with other branches,” Ms. Bondarenko said. “What we had, in the end, is a result of successful horizontal connections and the ability of Plast to adapt to the lockdown mode during this time.”

Vladyslav Malkov, who helped managed and organize this year’s celebration, also noted the difficulty of organizing the event amid the ongoing and currently spiking pandemic in Ukraine.

“The organization of the event began in the time of the introduction of new quarantine restrictions in Kyiv,” Mr. Malkov said. “Until recently, many branches of Plast had hoped to be able to conduct the celebration in person. On April 3, when it was clear that the reality was different and that the situation with the spread of COVID-19 in the capital and western regions of Ukraine will not improve until mid-April, two teams independently began to plan the Plast anniversary. Soon they decided to combine their events to celebrate Plast Oath Day all together,” Mr. Malkov said, referring to the anniversary of the first Plast Oath taken on April 12, 1912.

Organizers of this year’s festivities designed the program to appeal to all ages. It included interactive training, workshops, stories and competitions for prizes in online games. At the end of the evening there was an improvised bonfire, as well as a music concert with famous Plast members and musicians including National Deputy Yaroslav Yurchyshyn, Natalia Kiyak and Andriy Luzan.

The program also entertained Plast members with various contests and calls to television studios, where everyone could share their impressions of the celebration.

“I think the perception of online events has changed,” said Mr. Malkov, who is also a member of Plast. “What was strange, wild and new for the first time has now actually become common and familiar. And this year, it was not enough just to do something, but we had to compete for our youth’s attention and innovate. Therefore, I can say that this year there were fewer lectures and workshops, and more communication with each other.

Everyone could get live on air in front of thousands of people and send greetings to friends whom they have not seen for a long time.”

Additionally, on their 35th anniversary, the popular Ukrainian rock band Vopli Vidopliasova and the son of the band’s lead singer, Ustym Skrypka, released a song together. That song, titled “We are growing,” was presented as a music video on April 12. In fact, all of Oleh Skrypka’s children are members of Plast.

“At the heart of this rock anthem is a classic ancient text, which is about 100 years old. The text is by the outstanding Ukrainian author Bohdan Nyzhankivskyy,” said Oleh Skrypka, who created the music, which was then played and recorded by Vopli Vidopliasova, and sung by Mr. Skrypka’s son, Ustym. Mr. Skrypka’s wife, Natalia, had the idea to develop and implement the music video.

In a statement that accompanied the release of the music video, the members of Vopli Vidopliasova noted that the new song, “We are growing,” is “a life-affirming rock anthem of Plast, a national organization of Ukrainian scouts, which has been engaged in cultural and patriotic education of children for over 100 years. In our time, when media propaganda is destructive, and the information environment distorts children’s perceptions of the world around them, organizations such as Plast … are of particular importance. Here we can observe Plast members’ activities and the success of future generations – a scarce phenomenon in Ukrainian show business.”