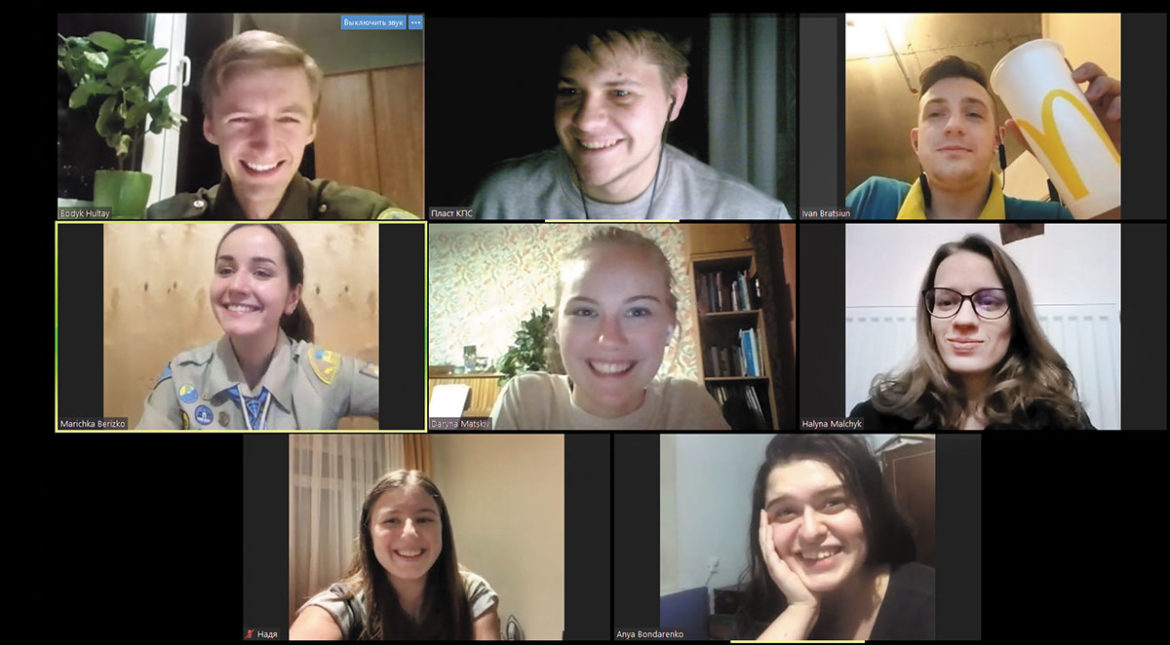 A screenshot of the post-event meeting of organizers of the Plast Oath Day celebration held via the Internet on April 11.

KYIV – Every year on April 12, Plast, the largest and oldest Ukrainian youth organization, celebrates the anniversary of the first Plast Oath, which is considered the date Ukrainian scouting was formally established. Under the current conditions of the coronavirus quarantine, members of Plast – National Scouting Organization of Ukraine did not cancel the celebration, but instead opted to go online. On the day before the historic date, April 11, Ukrainian scouts simultaneously across the country marked the 108th anniversary online. More than 9,000 people joined the 11-hour broadcast via the Internet. The four largest branches of Plast in Ukraine – Kyiv, Kharkiv, Ivano-Frankivsk and Lviv – all played a part in the program.

“The plan was that I would lead the organizers’ team for Plast Oath Day in Kyiv,” said Bohdan Hultai, coordinator of the online national celebration. “However, by the time event planning began it was March and it was clear that there was no possibility to carry it out as a result of the coronavirus epidemic. Preparations were frozen. Ivan Bratsyun, the head of Kyiv’s Plast branch, suggested organizing the event in an online format. We decided to demonstrate… that despite the quarantine, we are still together,” Mr. Hultai added.

Organizers say the event aimed to show the unity of Plast members and their readiness to overcome obstacles. “We thought globally,” so that branches from different corners of Ukraine – from Lviv to Kharkiv, could be involved. “We thought it was better to do one large-scale event than a few smaller ones, and we sent out a call. We were joined by Anya Bondarenko, Nadia Tsyutsyak and Halyna Malchyk – coordinators from Kharkiv, Ivano-Frankivsk and Lviv, respectively,” Mr. Hultai said of the start of this unprecedented project.

“We immediately created a joint chat, discussed the idea and started organizing it. It was planned that each of the four Plast branches involved would have its own part of the program – we wanted to combine fun and useful stuff. …We had to think through how the broadcast could be performed, connecting different instructors and speakers. Vladyslav Malkov courageously took on this part, and he practically did not leave his monitor for 10 and a half hours of the live broadcast,” noted Mr. Hultai, adding that this was no small challenge, as the team was using this format for the first time. Teamwork, he said, played a key role.

On the day of the event, when thousands of eyes were glued to the action taking place on the participants’ screens, the organizing team needed to respond quickly and coherently to all challenges. “It was fun and tense during the broadcast itself: while it was happening, we added smaller elements online – because we wanted to show everything. …We were constantly in touch, the leaders controlled their parts of the program. …We organized all of this, never having met in person, working strictly from home,” the coordinator of the online anniversary celebration summed up.

The anniversary program combined various activities of Plast scouts. The event began with an official opening and ended in the evening with an improvised campfire. The program also included workshops on making pysanky, lectures on parachuting, quizzes, online quests, greetings from various venues and speakers, and singing by the campfire.

For several years now, large celebrations of the anniversary of Plast’s founding have been held in eastern Ukraine, which is one of the priority areas of the organization’s development. “Plast in Kharkiv is as active as possible in the current circumstances. We conduct projects online, hold meetings, gatherings. We are trying to take advantage of the situation, to accumulate strength for action in the new branch’s year,” explained Ms. Bondarenko, who heads the Plast branch in Kharkiv. “The plans for the coming months include the accumulation of manpower. We are improving our internal processes, preparing for the next year and, at the same time, we are not abandoning our hopes for summer camp,” she said.

Plast’s Kharkiv branch began its rapid development after the Revolution of Dignity. It became a success story, proving that it is possible to create a community of several hundred people from scratch and to develop it into one of Plast’s largest branches. “The dream about Plast in the east of Ukraine has become a reality, and now it is our great responsibility: to persist in difficult social conditions and relations with the authorities, to be useful to smaller but no less important units of the organization,” Ms. Bondarenko commented. “Developing Ukrainian scouting in the east and the south is what makes Plast truly all-Ukrainian. It is reviving the national idea and Ukrainian history in these areas of Ukraine; currently it provides one of the few Ukrainian environments for children and volunteers. Of course, we need support to increase staffing and development, to prepare them properly, to maintain quality and quantity. And we are grateful to all Plast members, parents, friendly community organizations and Plast’s friends who helped and assisted us in activities and projects. There is more is to come,” the head of the Kharkiv branch promised.

This year’s online celebration of Plast Oath Day is far from the beginning of Plast’s activity via the Internet. Indeed, this event continues a long-term project that significantly complements and replaces elements of the Plast program at this time of quarantine. “Plastuy Online” (Do Plast Scouting Online) is an initiative of the Plast Central Office in response to the new challenge posed by the coronavirus pandemic and all its consequences. 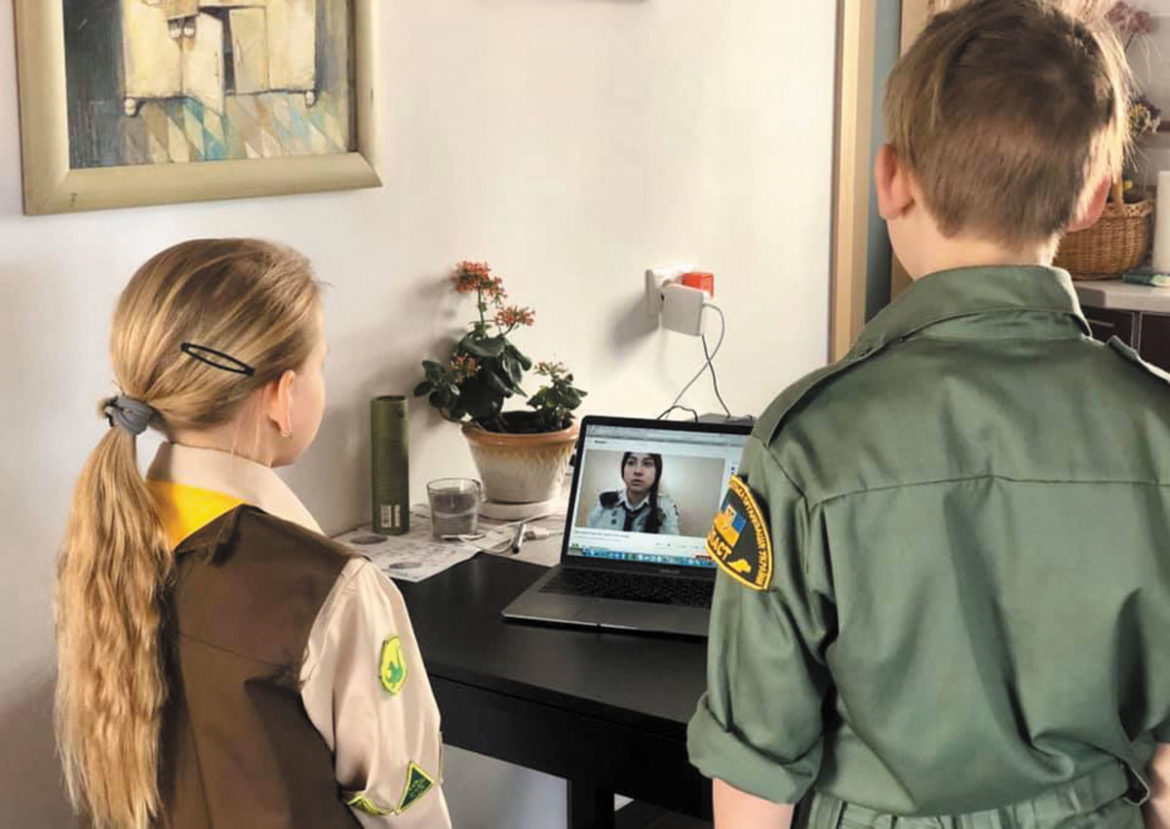 Plast scouts, at home, participate in the online celebration of the scouting organization’s 108th anniversary.

The project manager, Mr. Malkov, spoke about how the idea came to life: “Stanislav Andriychuk, the head of Plast in Ukraine, called me and said that we needed to create a platform for online Plast activities. There are many initiatives from our Plast scouts, but we need to bring them together. Within a few days, the first videos were released. The most popular videos we’ve done have been about life in nature because Plast members are always drawn to nature and especially when quarantined.”

Since he already had the experience of implementing technical solutions for Plast’s online activities, Mr. Malkov also took charge of the technical aspects of the online Plast Oath Day. “It was a rather spontaneous idea, and the active work began a week before the event. A a lot of material came after the start of the broadcast, so we had to broadcast and simultaneously process each succeeding piece of the program. In addition, I needed to ban provocateurs from the eastern neighbor country, who sometimes came to comment on the broadcast,” Mr. Malkov related.

He also spoke about some curiosities. For example, at an online rehearsal on the eve of the broadcast, the team conducted a symbolic transmission of a Plast neckerchief. When the person on the video removed her neckerchief and “transferred” it to the next frame, the broadcast abruptly stopped. It turned out that Facebook algorithms concluded the girl had started undressing, so it stopped broadcasting in accordance with its rules of use. Thus, the team decided not to “transfer” neckerchiefs for the anniversary broadcast the next day.

Although the festive event lasted for 11 hours, organizers gathered for a private video call afterwards and continued their communication. Someone jokingly came up with the idea of ​​repeating this format for an online Spring Festival (Sviato Vesny) – the opening of the camp season.

The head of Plast in Ukraine, Stanislav Andriychuk, recorded a video address for this holiday of all Plast scouts. “At the age of 13, I joined Plast. It was here that I learned to work as a team member and to be a leader, I learned how to take responsibility,” he said. “The uniqueness of Plast is its environment. Here a child has the opportunity for self-development and self-education. I want my daughter Yaroslava and many other children to grow up in Plast’s environment. For every Ukrainian child to have this opportunity, support Plast for our 108th anniversary.”

Since its inception in 1911, when the first Plast groups were organized, and the first Plast Oath in 1912, Plast has educated conscious, responsible citizens of their local, national and global communities and leaders of Ukrainian society. Every year, Plast’s volunteer scoutmasters invest more than 668,000 hours in the upbringing of children and hold more than 200 scout camps – and that’s only in Ukraine.

With the onset of the coronavirus quarantine, Plast began to face new economic challenges due to a sharp decline in business support and private donations in the wake of the crisis. Today, the organization is calling on all its friends for support in order to nurture its development so that Plast can continue developing Ukraine and Ukrainian communities around the world. (Charitable donations to Plast can be made at https://donate.plast.org.ua.)