Members of the Newark Branch of Plast at their closing ceremony.

WHIPPANY, N.J. – The Newark Branch of Plast Ukrainian Scouting Organization in the U.S.A. concluded its program for the 2020-2021 year with a formal closing ceremony that was held in person at the Ukrainian American Cultural Center of New Jersey on June 4. The closing ceremony was an opportunity for the scouting group to recognize and reward its members for their accomplishments over the past year.

When it became apparent that the limitations posed by the COVID-19 pandemic were going to continue into fall 2020, the Newark Branch, under the direction of branch leaders Orest Pencak and Roman Shyprykevych, the Branch Council and a network of dedicated counselors actively embraced the new video meeting technologies of Zoom and Google Meet to develop a complete program of weekly meetings and events that were held throughout the year and successfully engaged the scout members. 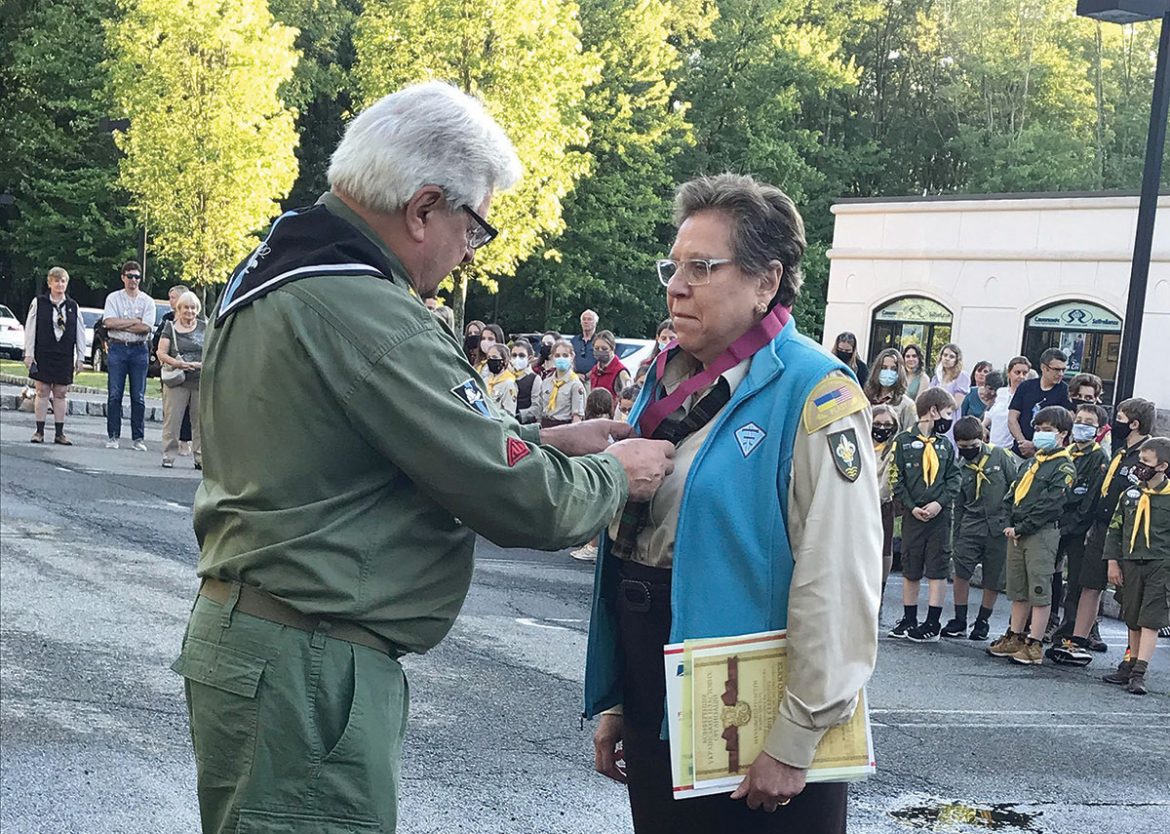 The consistency of the meetings allowed the Branch’s cub and teen scouts to rise to their next ranks in their divisions without interruption. All levels of scouts were able to acquire a wide array of interesting merit badges. Cub scouts learned about storytelling, nature, skiing, acting, mythology, origami, table games and ecology, while the older scouts earned badges for ceramics, sculpture, lover of animals, childcare, filming, astronomy, archery and more.

Two teen scouts, Liliana Tomko and Sophia Kowal, distinguished themselves by achieving the rank of Eagle Scout. They each completed nine projects that encompassed community service, scouting leadership, as well as projects with historical and cultural themes. In one project, Ms. Tomko raised $2,000 for the local first aid squad by collecting five tons of clothing. Ms. Kowal initiated a project where she video recorded a step-by-step tutorial on the art of drawing Ukrainian Easter eggs, which she presented to the Newark Branch and which was posted on the Plast Facebook website.

A very special honor was awarded to senior scout Zoriana Stawnychy who received the Order of St. George in Gold, the highest honor conferred by the Plast international governing board. Ms. Stawnychy received the distinction for her many years of exceptional contributions as Chief Financial Officer (CFO) for Plast in the U.S.A. In that role, Ms. Stawnychy refocused the volunteer organization to align with the principles of corporate and regulatory governance. One of her many achievements was to secure trademark status for the iconic trident symbol of Plast, the “lelijka.”

In addition to the weekly meetings, the Newark Branch conducted several unique branch-wide events. Instead of the traditional Christmas Carol visits to homes, which was precluded by COVID-19 restrictions, a team produced DVDs of scouts singing carols and sent the DVDs to all the members of the branch. The annual “Christmas Candle” ceremony was held online with a large number of scout families participating in the ceremony. 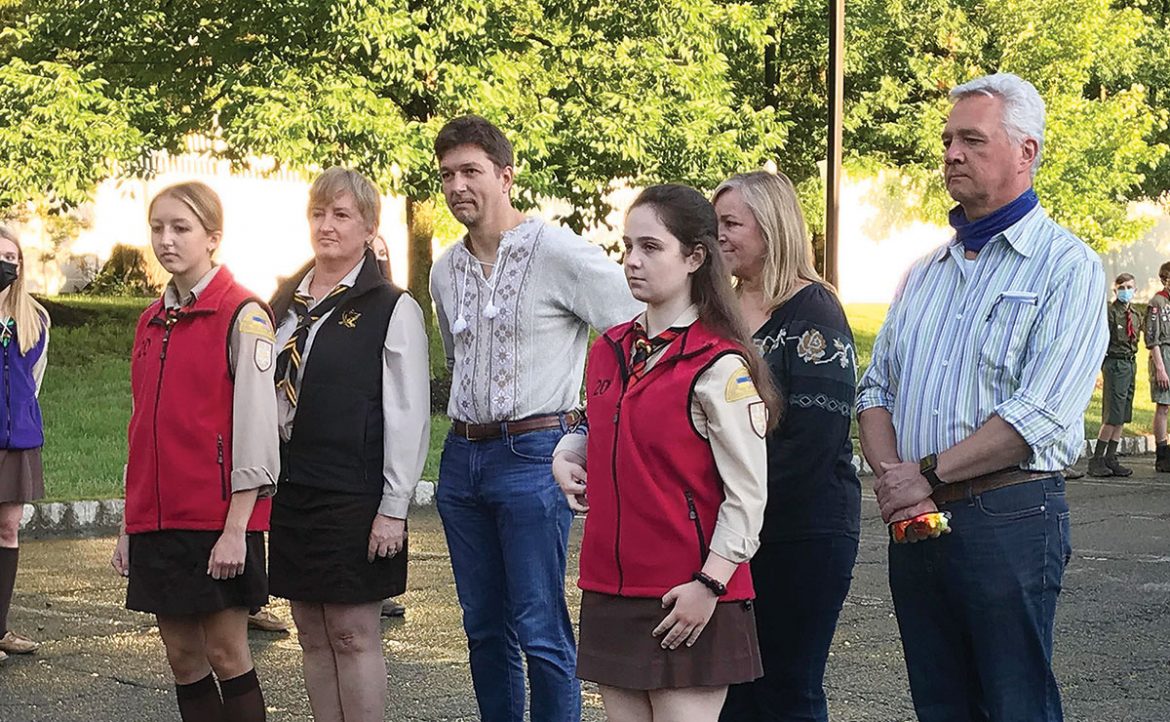 Liliana Tomko (left) and Sophia Kowal (third from the right) about to receive Eagle Scout rank; parents Anya and Brian Tomko and Marta and Boris Kowal stand behind them.

A memorable event was the online Day of Remembrance of the Heavenly Hundred Heroes (Nebesna Sotnya), commemorating the February 2014 massacre of Ukrainian patriots in Kyiv during the Revolution of Dignity. Scout Uliana Leschuk made a presentation to the branch about the historical events of that time.

On April 24, approximately 60 scouts from the Philadelphia and Newark branches joined forces to form six teams that competed in an online “Escape Room” game. The teams searched a room for clues and questions about the Plast oath and the early history of Plast in order to find the key that would let the team escape from the room. The ingenious game was conceived and developed by Sofia Shypry­kevych, a Drexel student and scout leader in the Philadelphia Branch, and the delightful event was organized by scout leaders Taissa Hamulak and Ms. Shyprykevych.

The COVID-19 pandemic imposed many restrictions on Plast activities that would normally have taken place during the year, but the ingenuity and enthusiasm of the leaders, counselors and member scouts of the Newark Branch prevailed with creative responses that resulted in a most memorable year. More information about the Newark Branch can be found at www.plastnewark.org and the Facebook page https://www.facebook.com/plastnewark.