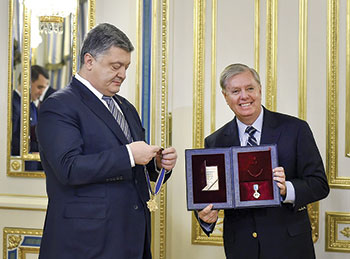 President Petro Poroshenko awards the Order of Freedom the Order of Prince Yaroslav to the Wise to Sen. Lindsey Graham.

The president awarded Sen. McCain the Order of Freedom and presented the Order of Prince Yaroslav the Wise to Sen. Graham for their significant personal contributions to the enhancement of relations between Ukraine and the United States.

Mr. Poroshenko emphasized the importance of traditional bipartisan support for Ukraine in the U.S. Congress and noted that the delegation included representatives of both parties. This confirms that such support will further remain in the struggle against Russia’s aggression, for the preservation of the sovereignty, territorial integrity and independence of Ukraine, he commented. 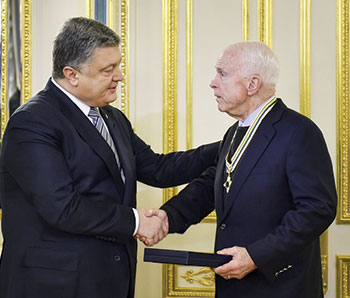 “It is crucially important that our people, Parliament, government stand side-by-side with the American people in this struggle. We feel this reliable support and assistance. This is extremely important in such difficult days for my country,” President Poroshenko said.

The president and the senators noted the importance of continuing efforts to ensure the fulfillment of Russia’s commitments under the Minsk agreements and to maintain the policy of international sanctions against Russia until full restoration of the sovereignty and territorial integrity of Ukraine, including Crimea.

The president offered the senators a chance to visit the Donbas and obtain objective information about the subversive actions of the Russia and its militants that continue provocations and violate the ceasefire regime.

Mr. Poroshenko noted the importance of the U.S. Congress adopting the Stability and Democracy in Ukraine Act (STAND), which he said would be an important decision in the interest of solidarity and unity with Ukraine.

He also stated that Ukraine is fighting not only for its own independence. “We are fighting for freedom, values, democracy, and we defend them in the center of Europe in the 21st century,” he stressed.

The president informed the U.S. senators about the course of reforms in Ukraine and emphasized the important U.S. role in that process.

In turn, Sen. McCain confirmed his determination to assist Ukraine in its struggle against the aggression of Russia.

View all Must reads/In the Press Stories →