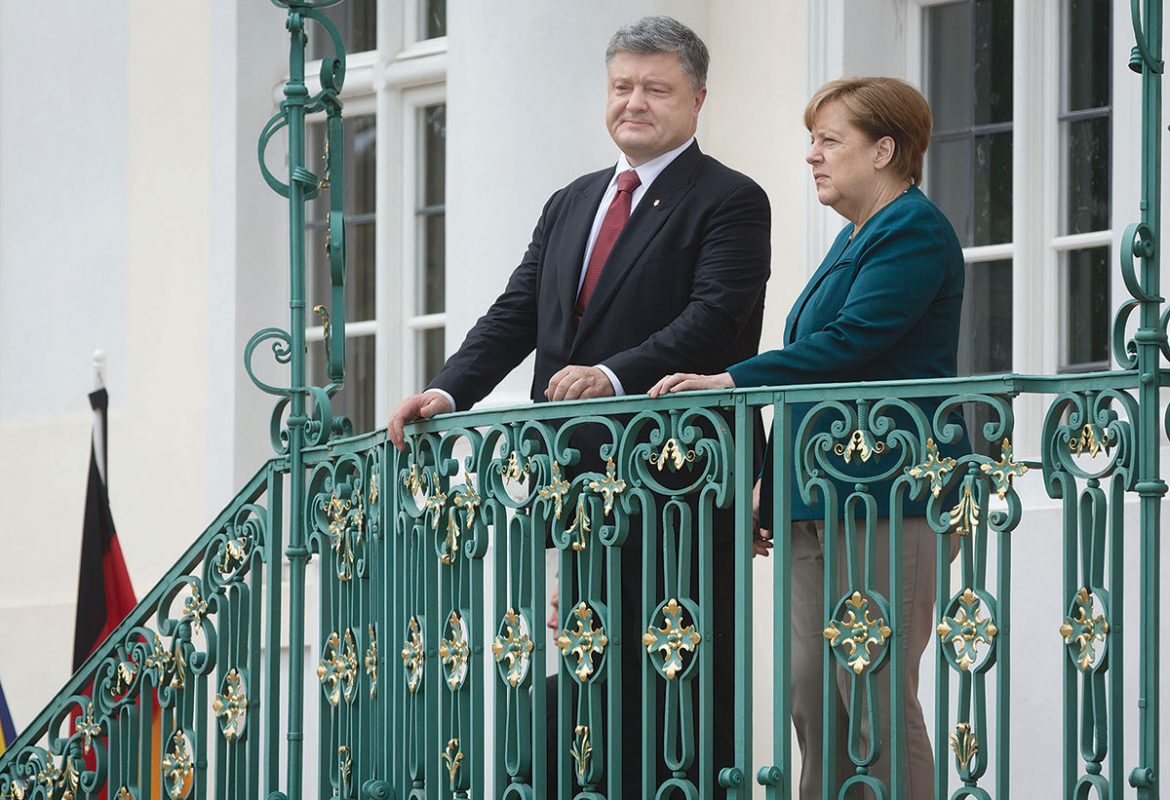 President Petro Poroshenko and German Chancellor Angela Merkel during their meeting in the village of Meseberg, north of Berlin, on May 20.

KYIV – President Petro Poroshenko urged the leaders of the G-7 group of industrialized nations to maintain sanctions against Russia for illegally taking over Crimea and for waging war in the Donbas.

Due to Russia’s persistent warmongering, there are “no grounds for the EU to cancel or ease economic and sectoral sanctions against the Russian Federation,” Mr. Poroshenko said during a telephone conversation with European Council President Donald Tusk ahead of the G-7 summit taking place on May 26-27 in Sicily, Italy.

The West should “strengthen” restrictive measures toward Russia, said Mark Galeotti, a senior researcher at the Institute of International Relations in Prague. In an opinion column for the European Council on Foreign Relations, the analyst of Russian politics said there is “much more we can do to show that aggression has consequences, even without risking further economic cost to ourselves.”

For example, Mr. Galeotti said personal sanctions could be expanded on “key figures within the Russian regime behind the aggression in Ukraine and Syria, and subversion in the West.”

Peace talks must be “re-started” German Chancellor Angela Merkel told her Ukrainian counterpart near Berlin on May 20, referring to the 2014 and 2015 Minsk accords that she helped broker together with ex-French President Francois Hollande.

Following Emmanuel Macron’s presidential election in France earlier this month, the German leader said she wants to bring him together with Russian President Vladimir Putin and Mr. Poroshenko to discuss the continuing violence in eastern Ukraine that has claimed more than 10,000 lives and displaced millions of people.

Separately, U.S. President Donald Trump reaffirmed “Trans-Atlantic unity in holding Russia accountable for its actions in Crimea and eastern Ukraine,” during a meeting with Italian President Sergio Mattarella on May 24, according to a readout from the White House.

And NATO Secretary General Jens Stoltenberg also said that the sanctions “are extremely important,” speaking ahead of the May 25 meeting of the defense alliance’s heads of state and government.

Mr. Poroshenko added that Kyiv will host the next yearly EU-Ukraine summit on July 13. The summit is the highest political meeting between Ukraine and the EU.

Meanwhile in Ukraine, 23 former tax officials were arrested and taken to Kyiv during a large-scale operation involving more than 2,000 law enforcement officers who conducted 454 raids in 15 regions.

They had served during Viktor Yanukovych’s truncated presidency in 2010-2014 and are accused of helping him embezzle 97 billion hrv, or $4 billion at the current exchange rate.

Chief Military Prosecutor Anatoliy Matios said that this was only the “first wave” of arrests on May 24.

Oleksandr Klymenko, who ran the income and tax ministry under the former president’s rule and is now living abroad at an undisclosed location, called the arrests a “public relations show,” in an e-mailed note to The Ukrainian Weekly. He denied the allegations.

The nationwide operation occurred as Prosecutor General Yurii Lutsenko was giving a report in Parliament on law and order.

On average, three bribery cases are sent to courts on a daily basis, the chief prosecutor told lawmakers. There is now a total of 1,191 such cases.

A current Security Service of Ukraine general was among those who were arrested, as was the former tax collector for Luhansk Oblast, Oleksandr Atnipov, who was found with $3.8 million in cash.

All the suspects were immediately flown in military helicopters to Kyiv, where they were remanded to custody following court trials, Internal Affairs Minister Arsen Avakov told reporters at a briefing at Zhuliany Airport in Kyiv.

Ukrainian will be the predominant language on television and radio, according to a bill that lawmakers passed on May 23.

It requires that nationwide Ukrainian TV and radio stations have Ukrainian-language programming at least 75 percent between 7 a.m. and 10 p.m. Likewise, local and regional outlets must have at least 50 percent Ukrainian content during this time.

“There should be the Ukrainian language on Ukrainian TV… Have I made it clear that I will sign the bill?” the president wrote on his Facebook page. “At some channels it [Ukrainian] is at the level of 15 percent… Gentlemen, have you forgotten the name of your country?”

Lawmakers failed last week to put three health care reform bills on the daily agenda that Ulana Suprun, the American-born acting health minister, has been trying to push through.

Her overall plan is to promote competition among health providers by having money “follow the patient,” as opposed to funding hospitals and clinics based on the number of beds they have. She also wants to introduce a nationwide health insurance system.