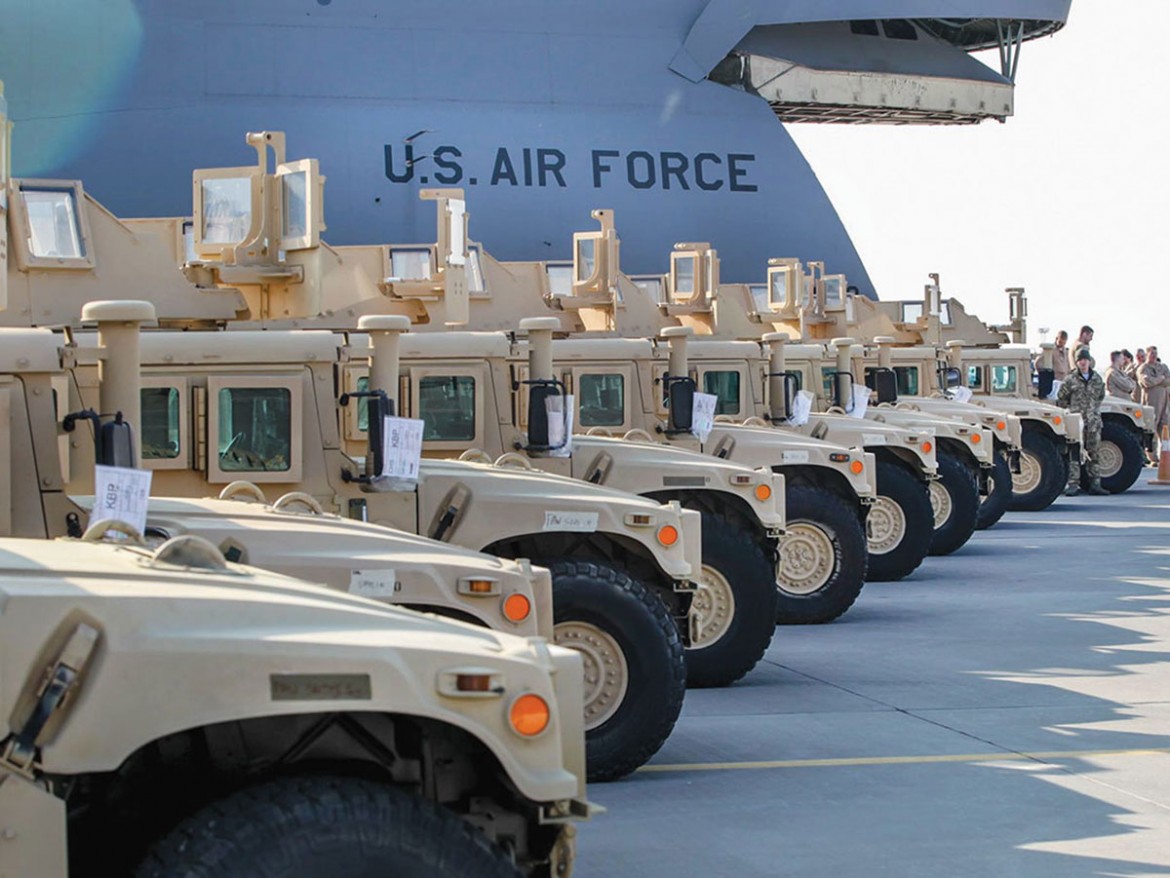 Ten Humvees on the tarmac at Boryspil International Airport, where they arrived on March 25 as part of U.S. assistance to Ukraine.

The 10 Humvees were delivered to Ukraine pursuant to a U.S. decision on sending defensive equipment to Ukraine. The heavily armored vehicles will be equipped with Ukrainian weapons. Eight of them will be conveyed to units of highly mobile airborne troops and two will be sent to the special units of the Security Service of Ukraine.

In the course of the arrival ceremony at Boryspil, President Poroshenko noted that provision of the equipment had demonstrated real support from the United States in the struggle for Ukraine’s territorial integrity and sovereignty.

“Comprehensive dialogue between Kyiv and Washington, as well as the provision of support for Ukraine by the United States are real evidence of the strategic partnership between our countries,” he said.

The president expressed gratitude to the U.S. and everyone involved in sending and receiving the cargo for the prompt work that will help save the lives of Ukrainian soldiers. “On behalf of the people of Ukraine, I would like to express gratitude to the United States for consistent and firm position on the settlement of the conflict in Donbas. For recognizing Russia as a country that carries out aggression against Ukraine. For the initiative and persistence in the matter of sanctions. For the solidarity with us and leadership in the elaboration of a single position of the entire Euro-Atlantic community,” he noted.

Pointing to “constant violations of the ceasefire regime,” Mr. Poroshenko said “military-technical assistance from the U.S.A. and other countries is timely and increasingly necessary.” He added, “I am confident that Ukrainian officers and soldiers will use these vehicles with maximum efficiency.”

Mr. Poroshenko noted that this was not the first equipment sent from the U.S., as Ukraine’s soldiers are already using modern means of digital secure communications, counter-battery radars, night vision devices, robotic demining systems and medical equipment provided by the U.S.

The Humvee or HMMWV is a High-Mobility Multipurpose Wheeled Vehicle. The civilian adaptation of the vehicle is known as the Hummer.

Source: Press Office of the President of Ukraine.