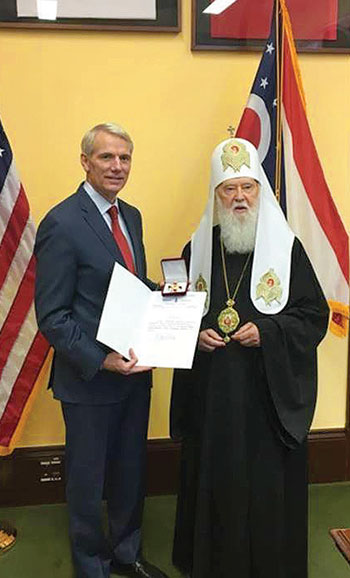 WASHINGTON – U.S. Senator Rob Portman (R-Ohio), co-founder and co-chair of the Senate Ukraine Caucus and a member of the Senate Foreign Relations Committee, received the Order of St. Volodymyr medal from Patriarch Filaret of the Ukrainian Orthodox Church – Kyiv Patriarchate. The award was given to Sen. Portman in recognition of his leadership and continuous support of Ukraine.

“I’m deeply honored to receive this award from Ukrainian Patriarch Filaret on behalf of the Ukrainian Orthodox Church. America stands with the Ukrainian people in their struggle to secure a democratic, prosperous and independent future for Ukraine in the face of Russian aggression,” said Sen. Portman. “As co-founder and co-chair of the Senate Ukraine Caucus and author of several provisions authorizing expanded U.S. military assistance – including lethal aid – and establishing the Ukraine Security Assistance Initiative, I will continue to do everything I can to help the Ukrainians defend themselves and maintain their territorial integrity.”

Sen. Portman, who received the Order of Merit from President Petro Poroshenko during his visit to Ukraine earlier this year and received the Ukrainian American community’s highest honor, the Shevchenko Freedom Award, in 2016, has long led the effort in the Senate to provide Ukraine the kind of assistance necessary to ward off Russian aggression and maintain its territorial integrity.

For the past three years, Sen. Portman has successfully introduced amendments to the annual National Defense Authorization Act that expanded U.S. military aid to Ukraine. In addition, he has repeatedly written letters, delivered multiple floor speeches, and pressed senior administration officials on the importance of providing meaningful assistance to help Ukraine stand up to Russia’s military aggression.