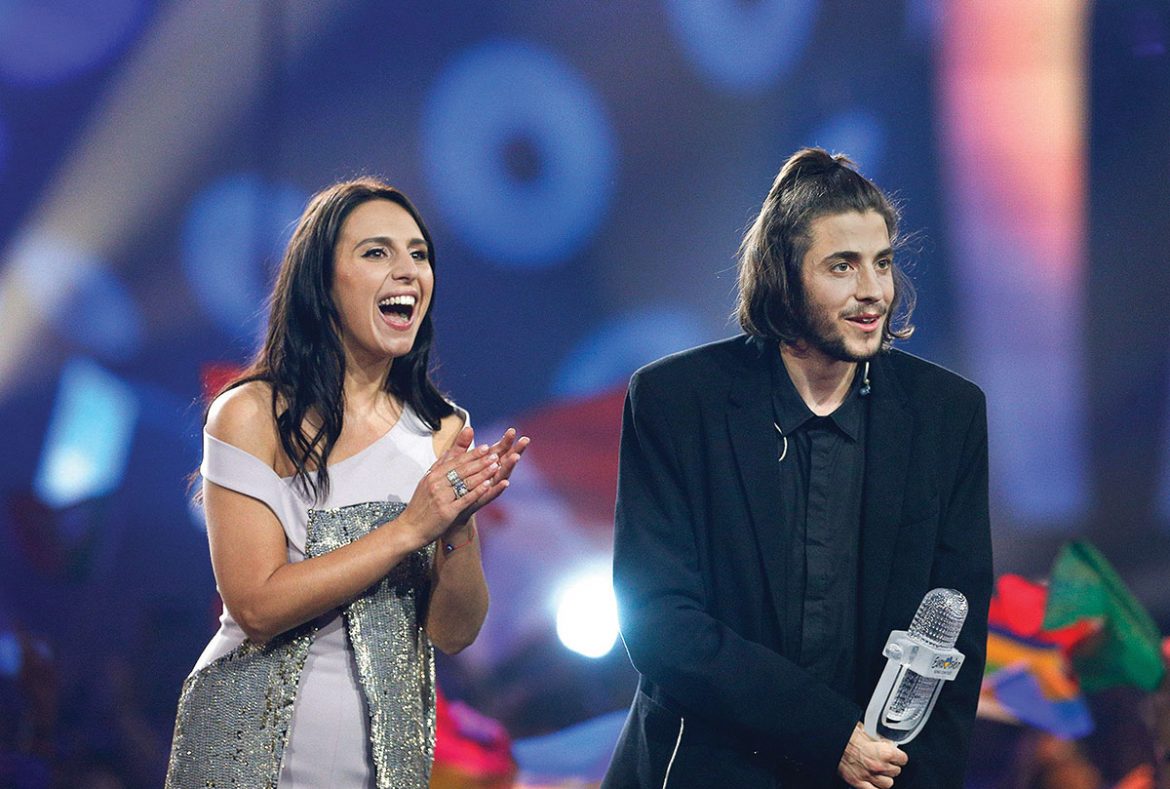 KYIV – Portugal was the top vote-getter in the 2017 Eurovision Song Contest, the annual festival traditionally watched by a television audience of an estimated 200 million people. Some 4 million people watched the contest’s grand final, breaking previous records, according to the official website of Eurovision 2017.

Singer Salvador Sobral was declared the winner early on May 14 in the Ukrainian capital of Kyiv, giving Portugal its first victory since it initially entered the contest in 1964. The winner was determined by a combination of points awarded by national juries and voting by telephone and text message from participant countries. The winning song was titled “Amar Pelos Dois,” written and composed by the singer’s sister, Luisa Sobral.

Ukraine won the right to host the event by virtue of its representative, Jamala, winning the event last year with her song “1944,” inspired by the Soviet authorities’ mass deportation of Crimean Tatars to Central Asia in that year. The Crimean Tatar singer returned to the contest this year, singing her new song “I Believe in U” as an interval act during the grand final on May 13.

President Petro Poroshenko met with organizers and hosts of the European music contest and congratulated them on the successful completion of the contest. “My sincere congratulations to you all. Eurovision 2017 was organized at a very high level. This is the result of a very efficient coordination and interaction of your and our team,” he said.

“Despite concerns of skeptics about possible threats, I am proud that we have made this wonderful event. Nobody could stop us,” the president underscored, as he invited everyone to visit the UEFA Champions League Final that will take place in Kyiv in May 2018.

The Eurovision final featured performers from 26 countries – 20 qualifiers from the first and second semi-finals held on May 9 and 11, and six automatic qualifiers, including the “Big Five” countries — France, Germany, Italy, Spain and the United Kingdom — and host country Ukraine.

Portugal earned 758 points to win. Bulgaria finished second with 615, while Moldova was third with 374. Ukraine, represented by the rock band O.Torvald, was 24th with 36 points.

The 27-year-old Mr. Sobral and Italy’s Francesco Gabbani, who finished sixth, were touted as the favorites, according to bookmakers. The youngest entrant, Bulgaria’s 17-year-old Kristian Kostov, had been ranked third.

Security at the event was reportedly intense, as Ukraine is fighting a conflict against combined Russian-separatists forces in eastern Ukraine

President Poroshenko announced on Facebook that he was canceling a planned appearance at the song contest because of a shelling incident in the eastern city of Avdiyivka that left four civilians dead.

This year’s Eurovision competition saw some controversy when Ukraine barred Russia’s entry, Yulia Samoilova, from coming to Kyiv because she had performed in the Russia-annexed Ukrainian region of Crimea in 2015. In response, Russia decided not to allow her to participate by video or to send another contestant. Russia also decided not to show the event on television.

Before the final night, it emerged that Bulgaria’s Kostov had also performed in Crimea soon after Moscow’s illegal annexation, but Ukrainian officials said he was allowed to enter Ukraine now because she had been just 14 at that time.

The Eurovision contest was first held in 1956 with just seven entrants.

At a post-contest meeting with Eurovision organizers and hosts, President Poroshenko noted the huge amount of work that went into the preparation, organization and hosting of the song contest at the proper level. “This is not only the issue of design and creative solutions, but also the issue of ensuring security of the participants and guests. I am very glad that we managed to organize everything at a high level. This allowed our guests to feel comfortable. Thousands of people worked to create a positive image of Ukraine. And it seems to me that we succeeded,” he stressed.

“It is a great pleasure that my team and my wife were involved in the contest. Maryna took part in the opening of Eurovision, a great number of Ukrainian volunteers assisted in the organization and holding of this wonderful competition,” Mr. Poroshenko said. He also expressed hope that thousands of foreign guests who visited Kyiv enjoyed the level of organization of the contest and hospitality of Ukraine’s capital.

“Despite Russian aggression and Russian occupation, Ukrainians and the Ukrainian authorities showed their hospitality and did everything they could to organize a truly wonderful event,” the president said. He expressed gratitude to Jamala for having brought Eurovision to Ukraine.

Jon Ola Sand, executive supervisor of the Eurovision Song Contest, also noted the extremely high level of organization of the 2017 contest. “Each year we have certain remarks or complaints: either transport or logistics, security or other aspects. But  Eurovision in Kyiv was held flawlessly. We didn’t have any problems. Everything was organized at the top level by the Ukrainian party,” he observed.

On behalf of the European Broadcasting Union, member of the EBU Administrative Board Pavlo Grytsak thanked and congratulated Ukraine’s president on the wonderful organization of the contest. “This is a great international event with thousands of foreigners who visited Ukraine. One of the most popular shows with many challenges and risks, particularly in the sphere of security. And the fact is that a wonderful job was done for all journalists, contestants and fans to feel the hospitality of Kyiv,” he commented.

Sources: RFE/RL, with reporting by Reuters, AP and AFP; Presidential Administration of Ukraine; official website of the 2017 Eurovision Song Contest.