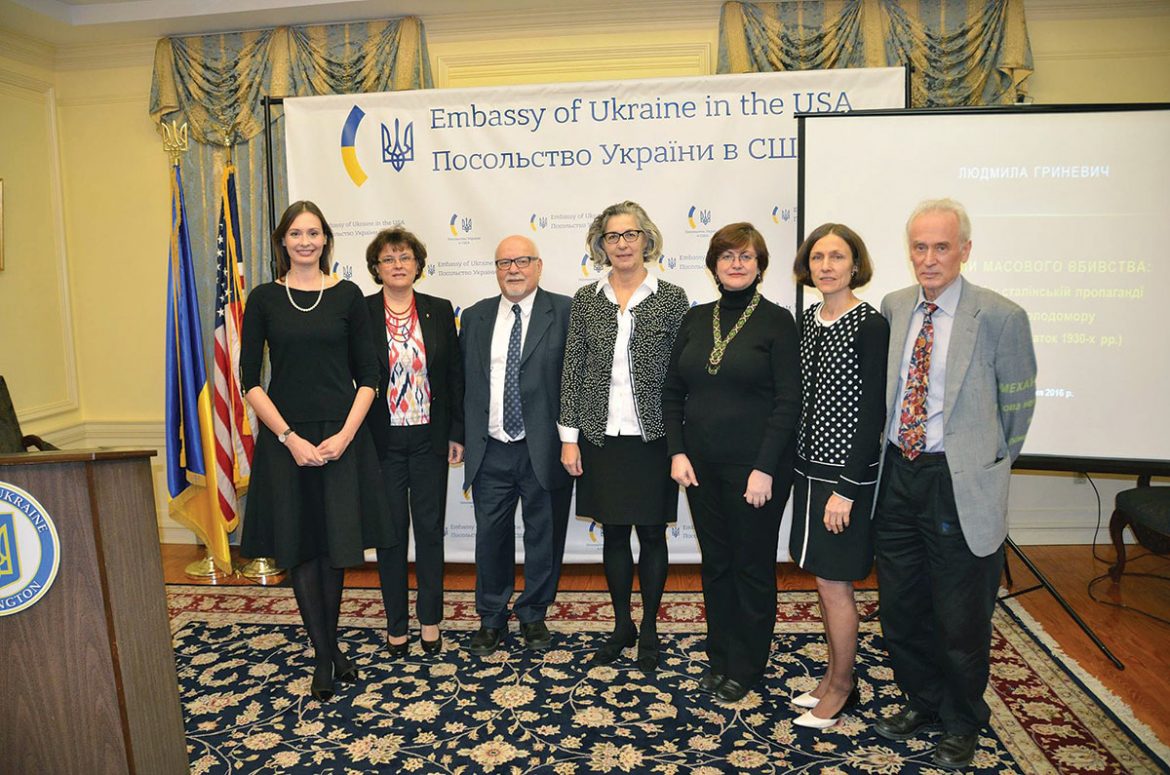 WASHINGTON – A number of presentations related to the Holodomor were made at the Embassy of Ukraine in Washington on November 17, 2016. The evening event was organized by the Shevchenko Scientific Society, Washington, D.C., chapter, together with the Holodomor Research and Education Consortium (HREC) of the Canadian Institute of Ukrainian Studies at the University of Alberta and the Ukrainian Congress Committee of America.

Oksana Shulyar, counsellor and head of the Political Section of the Embassy, welcomed the audience to the historic Embassy building and spoke about the importance of the Holodomor to understanding Ukraine. Bohdana Urbanovych, head of the Shevchenko Scientific Society’s Washington chapter, also offered words of welcome. Andrew Sorokowski, secretary of the Shevchenko Scientific Society, introduced the evening’s speakers.

Frank Sysyn, director of the Peter Jacyk Center for Ukrainian Historical Research at the Canadian Institute of Ukrainian Studies and editor-in-chief of the Hrushevsky Translation Project, spoke first about the evolution of the study of the Holodomor in the West by the scholarly community and his experience with the Harvard Famine Project, which supported the work of James Mace and Robert Conquest. Dr. Sysyn is head of the executive committee of the Holodomor Research and Education Consortium and co-editor with Andrij Makuch of “Contextualizing the Holodomor” (2015) and with Andrea Graziosi of “Communism and Hunger,” to be published in 2017.

Bohdan Klid, Director of Research at HREC and co-editor with Alexander Motyl of “The Holodomor Reader: A Sourcebook on the Famine of 1932-1933 in Ukraine” (2012), gave an overview of HREC’s major publication projects. These included the publication of memoirs from the Ukrainian Cultural and Education Center of Winnipeg (Oseredok), Holodomor testimonies gathered by Ukrainian writers Volodymyr Maniak and Lidia Kovalenko in 1989, and a collection of translations into English of scholarly articles written by Ukrainian scholars. 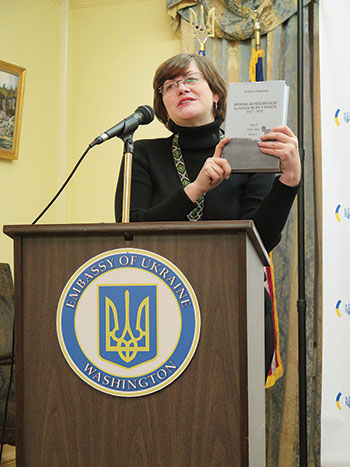 Liudmyla Hrynevych delivers her presentation and discusses the latest volume of her Ukrainian-language book, “Chronicle of Collectivization and the Holodomor in Ukraine, 1927-1933.”

HREC Executive Director Marta Baziuk then described activities of HREC that engage scholars from a range of fields and prompt them to consider the relevance of the Holodomor to their disciplines and its integration in their work.

Larysa Kurylas, the design architect and sculptor of the Holodomor Memorial in Washington, described the genesis of the memorial’s design and challenges in its execution.

Liudmyla Hrynevych, director of the Holodomor Research and Education Center in Kyiv and a senior scholar at the Institute of the History of Ukraine, National Academy of Sciences of Ukraine, gave a presentation in Ukrainian titled “The Holodomor and the Language of Hate in Stalinist Propaganda.” She demonstrated how Soviet caricatures of Ukrainian “kulaks,” Orthodox priests and other Ukrainian figures were used to foster hatred towards these groups as a prelude to their destruction.

The presentations were followed by a question and answer session and a reception hosted by the Embassy of Ukraine.