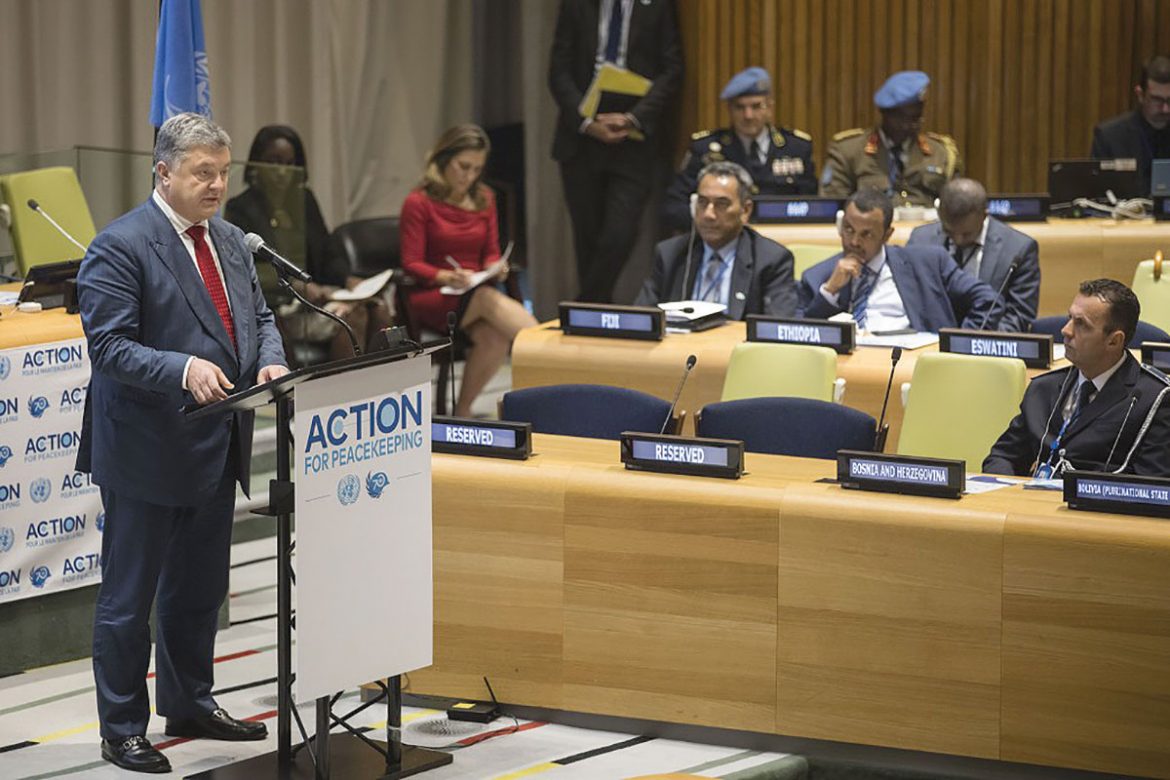 President Petro Poroshenko addresses the high-level meeting on Action for Peacekeeping held during the 73rd session of the U.N. General Assembly.

UNITED NATIONS – President Petro Poroshenko is confident that a United Nations-mandated multinational peacekeeping operation whose goal is to restore Ukraine’s sovereignty and territorial integrity could be a decisive factor in ending the suffering of the Ukrainian people.

That was his message on September 26 at the general debate of the high-level Action for Peacekeeping meeting held during the 73rd session of the U.N. General Assembly.

“It is evident that the world has not become a safer place in the 21st century. We still witness wars and aggression, even on the European continent. As we speak, the foreign military aggression against Ukraine, in violation of the U.N. Charter and contrary to the resolutions adopted by the General Assembly and the Security Council, rages on,” the Head of State noted.

Mr. Poroshenko emphasized: “The temporary occupation of parts of Ukraine’s territory continues to cause suffering of the Ukrainian people and undermine regional and international peace and security.”

He noted that, according to a conservative estimate by the U.N., the number of conflict-related casualties in Ukraine currently stands at over 35,000, including more than 10,000 people killed and almost 25,000 injured. The number of internally displaced persons is well over 1.5 million.

“It could look like yet another dry statistic, which this organization is full of, but for me and Ukrainians these are scars on the very heart,” the president said.

“I am confident that a U.N.-mandated multinational peacekeeping operation with the only clear goal to restore Ukraine’s sovereignty and territorial integrity could be a decisive factor in ending the suffering of the Ukrainian people. We believe that there is no better way but dispatching such an operation, under the robust U.N. mandate,” he underscored.

According to President Poroshenko, a peacekeeping operation would greatly assist in making Russia fulfill the Minsk agreements in good faith. “I am grateful to Germany, France and the U.S. for mobilizing international support of this initiative,” he added.

At the same time, the Ukrainian president stressed that Russia is against the peacekeepers. “One reason for that is that the Kremlin is afraid. It is afraid that the peacekeepers will see Russian military manpower and military assets all over the occupied territory. They are also afraid of losing control over Ukraine’s border with Russia – a hostage taken by the Kremlin to keep infiltrating its military into the Donbas,” Mr. Poroshenko said.

He asked: “Is it not for the U.N. to stand up to the challenge with courage?” He recalled that Ukraine’s request to deploy a U.N. peacekeeping operation in the occupied Donbas has not yet been addressed.

“We see it as a test for the ability of our organization to act in a challenging conflict situation. A test that still remains to be passed,” Mr. Poroshenko concluded.