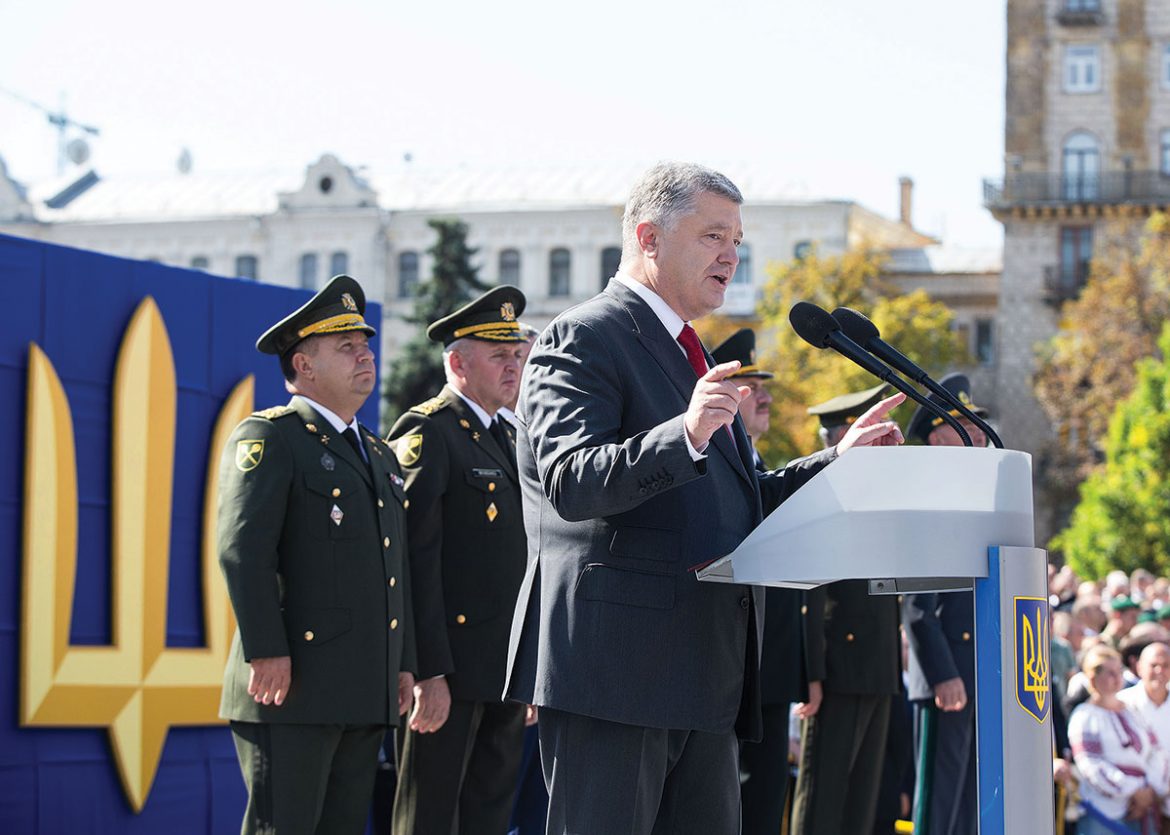 Following is the text of President Petro Poroshenko’s speech at the solemn army parade “March of the New Army” on the occasion of the 27th anniversary of the independence of Ukraine. The text was released by the Presidential Administration of Ukraine.

These are the words of “The March of the New Army,” which today will be heard for the first time during our military parade. It was created on the basis of the legendary song written in the late twenties of the last century. And it symbolizes the inextricable bond between different generations of fighters for freedom of the homeland. [Editor’s note: The reference is to the song adopted by the Organization of Ukrainian Nationalists in 1932 as the organization’s hymn.]

The last four and a half years have become a truly “great hour” for us, Ukrainians. We have experienced an incredible test of the war and economic crisis caused by Russian aggression. The enemy murdered thousands and thousands of Ukrainians – military and civilians; men, women, children. We were tested both for strength and fortitude. They tried to divide the people and dismember the country. They tried to block our movement to Europe. They wanted to drive the freedom-loving people back into the odious imperial stall.

Thank God and every Ukrainian for the fact that we withstood. And we have not only survived the bad times, but also strengthened muscles. We have become stronger and more confident in our own capabilities. We have laid the foundation for our progress with clear strategic reference points for the European Union and NATO for the future decades.

Our generation faces the task to break this fatal historical circle. To ensure that Ukraine’s independence is not measured by months or several years, as it was before. To prevent decades of mourning over the loss of the state and analyzing the reasons for another defeat. To be proud of victories and success of the state.

During four years of the war that Russia has unleashed against Ukraine, we have preserved and strengthened the state. The nation was consolidated on the principles of national defense and patriotism. We have created a strong army with you. And with the painstaking work of our diplomats, we have provided international political and diplomatic support for the independence of Ukraine.

The main thing is that we have firmly chosen our path of development. And we do not have the right to give it up for the benefit of external enemies and their agents inside the country.

First. We break all the fetters that connect us with the Russian Empire and the Soviet Union. To make independence irreversible, make Ukraine great and strong, without any prospect of returning to the Russian influence zone – this is the main task of our generation. This is a task of the society and the authorities elected by it.

Second. We, Ukrainians, go our own way and understand that we must, first of all, rely on our own strengths. Use the wealth of the country in the interests of the people and the generations to come. Ukraine must firmly defend its national interests. External help is still important for us, but first of all we have to help ourselves.

Third. The strengthening of independence should take place in concrete steps. The visa-free regime for travel of Ukrainians to the European Union is valid for over a year. We inexorably become part of the European space. It strengthens our political independence.

The Association Agreement and the Free Trade Agreement with the European Union entered into force, and as a result, the share of exports to the EU is now almost 43 percent, compared with 32 percent four or five years ago. A clear European strategy has given us an opportunity to compensate for the huge losses that we suffered as a result of the politically motivated closure by Russia of its market and transit to third countries for Ukrainian goods. Russia will no longer be able to blackmail us because we have strengthened our economic independence.

Since the fall of 2016 – yesterday it was 1,000 days already – we haven’t bought gas from Russia. Ukrainian Naftogaz brilliantly beat Gazprom in the Stockholm Arbitration Court, bringing $4.6 billion to the state coffers. That is how we gain our energy independence.

Fourth. There cannot be a free body, when the soul is in captivity. Let us be heard today in Constantinople, Moscow and the Vatican. We are determined to put an end to the unnatural and non-canonical dependence on the Russian Church of a significant part of our Orthodox community. A Church that sanctifies Putin’s hybrid war against Ukraine, prays day and night for the Russian government and for the Russian army.

Baptism came to us from the Constantinople Mother Church. And it is from Kyiv that it was spread all over Eastern Europe. Ukrainian Christianity has more than a thousand-year history, its own theological, liturgical and ecclesiastical tradition. Now that we have restored and defended the state independence of Ukraine with the capital in Kyiv, there is no reason why there should not be an Autocephalous Orthodox Church of Ukraine equal to the other autocephalous Orthodox Churches.

The issue of the Tomos on Autocephaly of the Orthodox Church of Ukraine goes far beyond religion. It is similar to the strengthening of the army, protection of the language, struggle for membership in the European Union and NATO. This is another strategic benchmark on our historic path. This is a significant component of our independence.

The integration into the European and Euro-Atlantic space is a reliable way to ensure security, the development of Ukraine and decent living conditions for people. Such integration is a one hundred percent guarantee of our independence. I want to emphasize separately – Europe needs us as well, because without us the European Union will not become a completed project. After all, the civilizational frontier of modern Europe lies along the northeastern border of Ukraine.

On the continent, all those who are not blinded by Russian money understand that without a European independent Ukraine, Europe will have less peace and security. Definitely less, not more. Without the restoration of the territorial integrity and sovereignty of our state, all borders in Central and Eastern Europe will be uncertain.

The Russian war against Ukraine is part of the Kremlin’s plan to ruin the European Union and NATO. Our warriors in the east defend security and prosperity not only in Ukraine, but also throughout Europe. So, we do not go to the European Union and NATO with empty hands. Today you will have the opportunity to see once again that the Ukrainian army is one of the best armies on the continent. “It will significantly strengthen NATO’s eastern flank. And, in return, we count on the guarantees of collective security provided by the alliance.

Since you have entrusted me with the post of president, the state compass points toward the West – in the direction opposite to the empire. Its arrow has never flinched. And I assure you, it will not flinch as long as this compass is in my hands.

Moreover, I will insist on consolidating this aspiration to join the European Union and NATO in the Constitution. Lawyers found a formula for doing this optimally and quickly. By the opening of the autumn session of the Verkhovna Rada scheduled for September 4, my corresponding bill will have been registered. And I will work day and night, and do everything for its approval.

The most reliable guarantors of Ukraine’s independence and the peaceful work of Ukrainians are Ukrainian warriors: the Armed Forces, National Guard, Navy, Border Guards, Security Service, police and other security structures. It’s possible to speak about the changes in the Ukrainian army over the last four years at least for four hours – there is too much to tell. But it will be better than any words to see the confident march of heroes, the technology and weapons radiating strength, and the skill of pilots.

The people’s army today reports to the Ukrainian people, and we are proud of it. Everyone who joined its development, everyone who sent SMS with money in 2014, who left home and started working as a volunteer, soldiers – everyone can be proud of his own contribution to strengthening our defense capability.

Let us bow our heads to honor the heroes who gave their lives for the peaceful future of Ukraine. Let us bow to every Ukrainian family that lost husbands, sons, mothers and sisters. Eternal memory to the heroes deceased in the battles for our free, independent Ukraine. Eternal glory to them.

Please honor the memory of the Ukrainian warriors and Ukrainian civilians fallen in the war unleashed by the Russian aggressor. We will never forget and never forgive.

Our Ukrainian Army is an army of peace. In the summer of 2014, it successfully liberated most of the Donbas from militants. And after the direct invasion of Russian regular troops, it firmly defends the country on the line of contact. It reliably protects Ukraine along the entire border with our aggressive neighbor.

The authorities did everything to reduce the impact of the war on society. I rejected the proposal to declare martial law that substantially restricted political rights and freedoms of citizens. Partial mobilization was replaced with formation of a contract army; reforms and peaceful construction are under way, while more than 5 percent of GDP is spent on defense and security.

We strive for peace more than anything.

Nobody strives for peace more than us, Ukrainians.

Real peace will definitely come to our land. It is only a capable army that can provide peace and victory, and it is becoming more and more powerful day by day.

“The nation is alive as long as it is fighting,” Levko Lukianenko, author of the Declaration of Independence of Ukraine, said. Today, Levko Hryhorovych would have turned 90 years old. We are all deeply grateful to this man, this legend, for his outstanding contribution to the struggle for the freedom of Ukraine and the freedom of its citizens.

You have just heard and seen that the minister of defense for the first time in history greeted the participants of the parade with the words “Glory to Ukraine!” The strongest traditions are those that are born from the people. Generated by the people and human hearts, transmitted from generation to generation. Our symbols are not only the flag, emblem and hymn that are written into the Constitution, but also the national slogan: “Glory to Ukraine! Glory to the Heroes!” We feel a colossal uplift from it, and our enemies avoid it like the devil avoids holy water. It has entered our lives, but now it’s time to give it the power of law.

That is why I will submit to the Verkhovna Rada a bill on amendments to the military statutes, according to which this slogan will become the main greeting of the Armed Forces of Ukraine.

Happy 27th anniversary of the independence of Ukraine!

Happy centenary of the revival of Ukrainian statehood!

Glory to the Ukrainian troops!

Glory to the Armed Forces of Ukraine!

Glory to the Ukrainian nation!