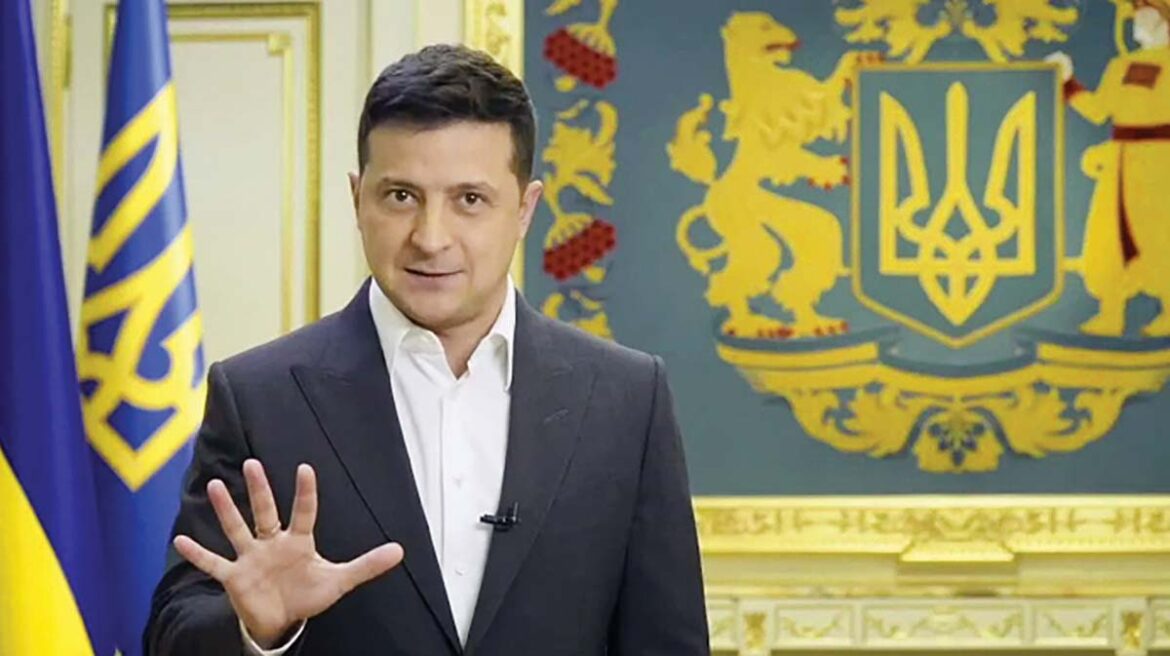 President Volodymyr Zelenskyy, seen in a screenshot from his video address to the nation, will ask Ukrainians five questions in a poll on the day of nationwide local elections.

KYIV – On October 25, millions of Ukrainians will vote in local elections, choosing leaders and deputies of their communities, raions, cities and oblasts. As they leave their polling stations, the voters will also be asked to voluntarily answer five more questions posed by Ukraine’s President Volodymyr Zelenskyy. However, the poll will not have any direct legal consequences.

The president has no legislative right to develop a nationwide survey, especially when it comes to state funding. To observers, the poll looks like an illegitimate referendum that might bring about real change since the president’s party, Servant of the People, controls the legislative branch, the Verkhovna Rada.

Twelve days before the elections, on October 13, the Presidential Office released an announcement about the plebiscite. “One of the unpleasant and obviously undemocratic features of political life in Ukraine for several decades has been the separation of the content of politics from the expectations of the citizens of our state. The state is separate, society is separate,” reads the statement. “A narrow circle of so-called professional politicians was engaged in the exclusive development of both questions of strategic importance for Ukraine and answers to them. In this, we see the key risks for our future – the state could not and did not always want to hear its citizens and understand the basic needs of society,” said the Presidential Office, explaining the importance of a nationwide poll.

According to the statement, one of the critical priorities of President Zelenskyy is to provide more significant opportunities for society to decide how to develop the state. The goal is “significantly reformatting the principles of our political system,” and the Presidential Office aims to give society tools for communicating its expectations to the government. “Not only referendums can be used as a tool of direct influence of citizens on the content of public policy. Polls are another tool,” notes the statement.

On October 20, it was reported that the poll would be funded by the Servant of the People party.

Critics underline the legal issues raised by this poll, particularly unlawful agitation. In his addresses to the nation, the president uses slogans from his party’s local election campaign. “Doubtful manipulative polls that contradict the election law will not help the current government,” wrote Petro Poroshenko on his Facebook page. “Someone in the Presidential Office said that this poll seemed to be a democracy. This is not true and a manipulation. Conducting a ‘poll’ on election day is a looting of the Constitution of Ukraine and international election standards,” Ukraine’s ex-president commented.

“We emphasize that the poll proposed to be held on October 25, unlike the referendum, will not have direct legal consequences,” the Presidential Office stated. “The need for this form of direct democracy is because the content of politics in the state should be determined by the people, not only those who have enough media influence and money to manipulate the impression of public opinion in their interests. This is how true democracy works.”

President Zelenskyy announced that he would unveil one question per day out of the five asked in the poll. However, after two videos explaining the questions, the Presidential Office revealed all the remaining questions at once.

The first question in the nationwide poll will be, “Should life imprisonment for corruption of a particularly large scale be introduced?” Life imprisonment is the highest measure of punishment in Ukraine; it replaced the death penalty. It is applied only in exceptional cases. As of January 1, 2020, 1,536 people are serving life sentences in Ukraine.

Among the crimes for which life imprisonment may be imposed are a terrorist act that resulted in death, the use of weapons of mass destruction, resulting in death or other serious consequences; genocide; rape of a person under the age of 14, committed repeatedly; and encroachment on the territorial integrity and inviolability of Ukraine, which resulted in the death of people or other serious consequences.

The second question in the nationwide poll will be, “Do you support the creation of a free economic zone in the Donbas?” A free economic zone is a type of special economic zone designated by various countries’ trade and commerce administrations. The term is used to select areas where companies are taxed very lightly or not at all in order to encourage economic activity. According to the 1999 Revised Kyoto Convention, a “free zone” refers to “a part of the territory of a contracting party where any goods introduced are generally regarded, insofar as import duties and taxes are concerned, as being outside the customs territory.” Each country determines its own taxation rules. From the president’s announcement, it is unclear which rules he proposes for the Donbas and what the proposed borders of this zone are to be.

“The main problems of the Donbas are the format and efficiency of the peace process, as well as the de-occupation and reintegration of territories,” pointed out Kira Rudyk, a national deputy and head of the Holos party. “It seems that the president’s entourage is finally losing its sense of reality. The second question from the president for the ‘poll’ shows the doubtfulness of this idea and the helplessness of the head of state.”

“The only positive thing is that the president’s team has finally started reading our [Holos’s] ‘Strategy for the Cold Deoccupation of Crimea and the Donbas.’ We presented it back in February. Unfortunately, they read it from the end – because first our lands must be liberated from the Russians, and only then should we take care of economic zones,” Ms. Rudyk added.

Question number three is: “Is it necessary to downsize the Verkhovna Rada of Ukraine to 300 deputies?” Twenty years ago, President Leonid Kuchma initiated a referendum that had a similar question on the ballot. “Would you agree to reduce the number of national deputies of Ukraine from 450 to 300?” was a question posed to voters on April 16, 2000. An overwhelming 91 percent (or 26.7 million Ukrainians) supported the decrease in the number of deputies. Among other issues in the 2000 referendum were the deputies’ immunity, the introduction of a second chamber of Parliament and a president’s right to suspend the Verkhovna Rada. However, the changes were never implemented because the referendum’s constitutionality was questioned. The Venice Commission that reviewed the case confirmed the referendum’s questionable nature, noting that it should be reviewed by the Constitutional Court of Ukraine.

The fourth question on October 25 is: “Do you support the legalization of cannabis for medical purposes – to reduce pain in critically ill patients?” Former Minister of Health Ulana Suprun wrote on her official Facebook page that “Cannabis should be available to all patients who need it. There are about 2 million such patients in Ukraine.” Cannabis is needed by more than 20,000 children with drug-resistant forms of epilepsy (untreatable by traditional drugs), hundreds of thousands of cancer patients, more than 100,000 patients under palliative care, and tens of thousands of war veterans with post-traumatic stress disorder.

Using cannabis for medical purposes is standard world practice, as the healing properties of cannabis are recognized. Medicines based on it are allowed in 44 countries, including the EU member states Poland, the Czech Republic, Croatia, Belgium, Germany and Austria, as well as Canada and the United States. Today, the use and storage of marijuana in Ukraine are illegal. Cannabis, cannabis resin, cannabis extracts and tinctures are included on the list of “Significantly dangerous narcotic drugs, the circulation of which is prohibited.”

The final question in Mr. Zelenskyy’s plebiscite – “Does Ukraine need to raise the issue of using the security guarantees set out in the Budapest Memorandum at the international level to restore its state sovereignty and territorial integrity?” – refers to the implementation of provisions of this international document from 1994. Under the Budapest Memorandum the United States, the United Kingdom and Russia provided unconditional guarantees of security for the territorial integrity and sovereignty of Ukraine, while the Ukrainian state pledged to get rid of nuclear weapons. At that time, Ukraine had the world’s third largest nuclear arsenal.

According to the Presidential Office, “Ukrainians should be asked: ‘Should Ukraine raise the issue at the international level today: are all the signatories of the memorandum fulfilling their commitments, or none?’ Then, when the government receives a mandate from the people, it will appeal to the signatory states of the memorandum to fulfill their obligations.”

“Updating the provisions of the Budapest Memorandum can help our country restore the opportunities lost during that time, creating much stronger negotiating positions together on Donetsk, Luhansk and Crimea,” reads the explanatory statement released after the president announced the poll’s fifth question.

According to a survey conducted by the Kyiv International Institute of Sociology on October 17-19, 41 percent of Ukrainians will not trust the results of the nationwide poll initiated by President Zelenskyy on election day, and 43 percent will trust them. At the same time, 44 percent of respondents believe that the poll represents the president’s sincere intention to hear the opinion of the majority, while 44 percent believe it is a political ploy to achieve his own goals. Residents of the western part of the country have the most faith in the sincerity of intentions and trust in the answers to Mr. Zelenskyy’s five questions. Fifty-five percent of respondents said they intended to take part in the presidential poll.