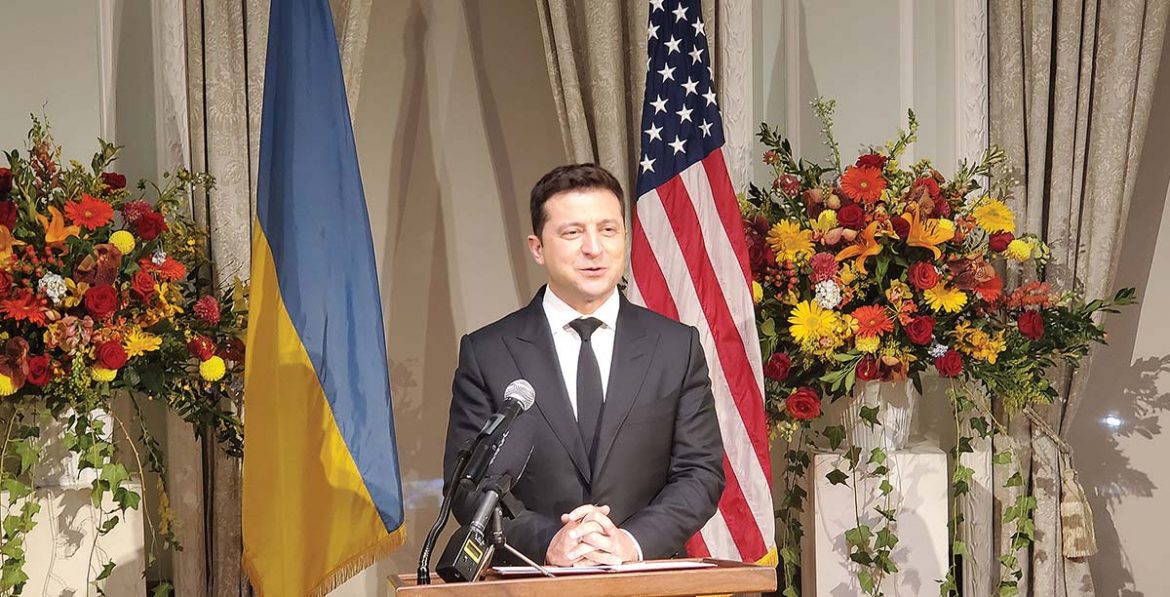 President Volodymyr Zelenskyy of Ukraine speaks with the Ukrainian community at the Ukrainian Institute of America in New York on September 21.

NEW YORK – President Volodymyr Zelens­kyy met with dozens of leaders representing various Ukrainian community organizations at the Ukrainian Institute of America (UIA) on September 21 during his working visit to the United States. His primary reason for the visit to the U.S. was to participate in the opening of the 76th session of the United Nations General Assembly.

Following the singing of the Ukrainian national anthem, Mr. Zelenskyy began his address by highlighting the active role of the Ukrainian community in the U.S. and its close working relationship with Ukraine.

“I think you are our best ambassadors. Because you are defending our state, our sovereignty, territorial integrity abroad,” Mr. Zelenskyy said.

During his address, he suggested the introduction of dual citizenship for Ukrainians living abroad. This would not be extended to Ukrainians living on the territory of unfriendly states, Mr. Zelenskyy said, and he underscored that the issue should be considered carefully and without haste to anticipate all of the complications that may arise.

“There is a great potential to have diaspora Ukrainians recognized as full citizens of Ukraine. This is a complicated issue, but all the difficulties will be resolved due to our energy, our desire,” the president said.

He also stressed the importance of restoring respect for Ukraine and Ukrainian history.

“Respect is measured by concrete things. Today you can fly home and drive on beautiful roads,” he said, noting that the project of restoring historical landmarks in Ukraine is currently underway.

“This is respect for the history of our country. This year marks the anniversary of the restoration of our independence, our state. That is why we are restoring [historical landmarks],” Mr. Zelenskyy said.

Ukraine is turning a new page in its history, and Ukrainians must renew their commitment to Ukraine, as an independent, colorful and multifaceted country, Mr. Zelenskyy said. Ukrainians, he added, must prepare the way for the upcoming leaders of Ukraine as they enter a new age of independent Ukraine.

“This [diplomatic path] requires all the efforts and pressure of foreign representatives: embassies, leaders of different states, church leaders – all those who feel that they can do something to restore peace. That is why each of you must do everything possible to restore peace in our country,” Mr. Zelenskyy said. “Keep working for Ukraine’s future, just as Ukraine’s soldiers on the front lines and those battling on the home front [are working for Ukraine’s future].”

Mr. Zelenskyy concluded by sharing with his audience the slogan, “Glory to Ukraine! Glory to the Heroes!”

Mr. Kytasty, in speaking with The Ukrainian Weekly, spoke about being recognized by the Ukrainian president.

“This is a big one for me, and it is truly special to receive it in New York at the Ukrainian Institute of America,” Mr. Kytasty said. “I began my professional bandura career in 1980 in New York, where it was unprecedented to see such rare music selections performed in America at a professional level prior to Ukraine declaring its renewed independence 30 years ago. In 1981, I performed my first professional concert 40 years ago at the Ukrainian Institute of America.”

Mr. Kytasty was artistic director of the New York School of Bandura (and now serves as musical director/instructor), which received financial support from the Ukrainian National Association. Additional information can be found at the school’s website, www.nybandura.org.

Additional greetings were delivered by Andrew Futey, president of the Ukrainian Congress Committee of America, who greeted Mr. Zelenskyy and wished him success in his work at the United Nations.

Mr. Futey thanked Mr. Zelenskyy for his cooperation and collaboration on a variety of issues facing Ukraine.  He noted that the Ukrainian diaspora is mobilized within the intellectual, cultural and civil society spheres, and he looks forward to further cooperation between the UCCA and Mr. Zelenskyy’s administration.

Ukraine, Mr. Futey said, continues to be a strategic partner for the United States, as Ukraine pursues membership in NATO and the EU. The Russia-occupied Donbas regions of Donetsk and Luhansk oblasts, as well as Crimea, he said, will return to Ukraine’s control as the country reminds the international community of violations against Ukraine’s sovereignty, territorial integrity and threats to its independence.

“It’s not over,” Mr. Futey said, adding that Ukraine needs assistance to attract foreign investments. “May God protect you and your work,” he concluded.

“This year, as Ukraine celebrates the 30th anniversary of its renewed independence,” Ms. Nalywajko said, “Ukrainians look ahead to the next 30 years and its prosperous future with great potential for growth.”

She expressed best wishes to the president, wished him safe travels, and said she looks forward to the next meeting with Mr. Zelenskyy at the UIA.

Unlike in previous years, and due to COVID-19 restrictions, the audience size for the event was limited.

Among the dignitaries present from Ukraine’s diplomatic corps were: Ukraine’s Foreign Affairs Minister Dmytro Kuleba; Ukraine’s Ambassador to the United States Oksana Markarova; Consul General of Ukraine in New York Oleksii Holubov; Andrii Sybiha, deputy head of the Office of the President of Ukraine; and Andriy Yermak, Mr. Zelenskyy’s chief of staff. Ukrainian church leaders were represented by Metro­politan Archbishop Borys Gudziak of the Ukrainian Catholic Archeparchy of Phila­delphia, and Metropolitan Antony and Archbishop Daniel of the Ukrainian Ortho­dox Church of the U.S.A.